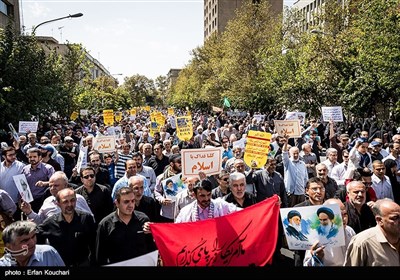 PHOTO: The march in Tehran on Friday

Iran’s regime staged an anti-Saudi display on Friday, with marches and speeches culminating a week of rhetorical confrontation of Riyadh.

The escalation began on Monday with the Supreme Leader’s Hajj message declaring the Saudis as “traitors” who had killed Iranian pilgrims during a stampede near Mecca in September 2015 which left thousands dead. On Wednesday, Ayatollah Khamenei called for the Hajj to be taken away from the “the vicious and cursed progeny of al-Saud”. The next day, President Rouhani linked the criticism over the Mecca deaths to regional issues: “It is committing crimes in the region and supporting terrorism, shedding Muslims’ blood in Iraq, Syria and Yemen, and bombarding innocent women and children in Yemen.”

Yesterday, the regime said marchers set off from more than 850 locations of Friday prayers to chant, “Down with al-Saud and al-Khalifa”, referring to the Saudi monarchy and that of its close ally Bahrain. Placards also proclaimed, “Down with US” and “Down with Israel”.

Tehran Friday Prayer leader Ayatollah Ahmad Jannati pondered why other Muslim countries did not show concern for their pilgrims and announced, “The Saudi actions today are tantamount to what their predecessors in Hijaz did out of their barbarism and ignorance.”

Other clerics echoed the message, saying “no Muslim will forget the crimes” of Riyadh. The Qom Friday Prayer Leader, Ayatollah Ali Reza Erafi, accused Saudi Arabia of promoting “terrorist thinking” in the Middle East, and the Mashhad Friday Prayer Leader, Ayatollah Ahmad Alamalhoda claimed that Saudi Arabia caused “all the problems in the region”.

The head of Iran’s Hajj organization, Saeed Ohadi, maintained that the Saudis barred Iranians from making the pilgrimage this month and refused to discuss how to prevent another tragedy.

Discussions this summer between Iran and Saudi Arabia — which broke diplomatic relations with Tehran in January — failed to reach an arrangement for Iranian participation.