Syria Daily, July 31: Did the US Abandon Its 54 Trained Rebels? 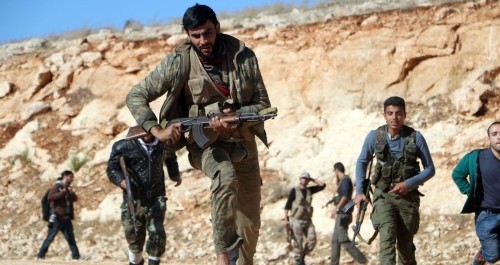 Analysis: Why Iran Will Not Compromise

UPDATE 0640 GMT: Reports are circulating that the US airforce bombed Jabhat al-Nusra positions in Azaz in northern Aleppo Province, near the suspected location of the abduction of 18 American-trained rebels, on Friday morning:

Claimed footage of smoke rising from the airstrike:

The US strike came as Jabhat al-Nusra attacked the headquarters of the 30th Division of the Free Syrian Army, which hosted the 54 rebels trained by the US. The Division says five members were killed.

ORIGINAL ENTRY: Following Jabhat al-Nusra’s abduction of 18 of the 54 US-trained rebels in northern Syria, the mainstream media have taken notice of the months-long difficulties of the program.

The program was approved last autumn by the Obama Administration. Training was supposed to begin in March, with 3,000 fighters on the battlefield against the Islamic State by the end of 2015 and 5,000 in total.

However, the effort was soon plagued by bureaucratic and logistical problems and, most importantly, a division in objectives. Syria’s rebels, while fighting the Islamic State, have a priority of overthrowing the Assad regime.

See Syria Daily, July 30: A US War With Jabhat al-Nusra?

Colonel Nadim Hassan, the commander of the 54 rebels — and one of the 18 seized by Jabhat al-Nusra on Wednesday — explained the outcome in an interview two days earlier:

Mr. Hassan helped to gather several groups totaling 1,200 insurgents, who were already fighting in Syria and willing to join the training. They began fighting together as a unit called Division 30….

After screening, just 125 of his recruits were invited to the first course. Of those, more than half were thrown out or quit.

Hassan questioned the American vetting process, “Some [fighters], expelled on suspicion of embracing ‘Islamic State doctrine’, are unavailable — they have since died in Syria, he said — battling the Islamic State.”

Reuters goes farther, getting to the core of the division between not only the US and the rebels but also Turkey, one of the main supporters of the opposition and the host of the training: “The vetting requirements…weed out fighters whose primary aim is to overthrow Assad.” For any propsect of training, the men had to “sign a declaration pledging to only use U.S.-supplied weaponry and military know-how to combat the Islamic State”.

The criticism of the US goes beyond the blocking of any more fighters than a group which — as one analyst put it on Wednesday — could fill a bus. The critics say the 54 rebels who were put into Aleppo Province were under-equipped and immediately put at risk, not only of defeat by the Islamic State but of attack by the Islamist faction Jabhat al-Nusra — which fights alongside rebels on some fronts, but only amid growing tensions over its operations and links to Al Qa’eda.

In his Monday interview, Colonel Hassan said that the Pentagon had yet to provide night-vision goggles that he had requested and that some fighters were threatening to quit because he could not pay for their expenses.

Colonel Hassan said he had asked American trainers “if they are going to protect us”. The reply: “Our government still hasn’t announced anything that includes fighting the Assad regime.”

However, Carter continued, “We have not determined yet all the rules of engagement under those circumstances.”

The risk to the 54 US-trained fighters was compounded when they were put into areas of northern Aleppo Province where Jabhat al-Nusra as well as rebels operated.

Since last September and the first day of US aerial intervention in Syria, American airstrikes have targeted Jabhat al-Nusra as well as the Islamic State. Scores of fighters and civilians have died, with the latest attack reportedly killing four people early this week.

US officials have said that they are dealing with the threat of the “Khorasan Group”, whose members are supposedly planning attacks in the US and Europe. Local sources have questioned that rationale, saying that Washington is directly fighting Jabhat al-Nusra, which has been listed as a terrorist group since 2012 by the US because of its allegiance to Al Qa’eda.

Some rebel factions warned weeks ago that any US-trained fighters entering Syria were at risk because of the US attacks on Jabhat al-Nusra.

The Pentagon initially denied on Thursday that any rebels had been abducted. Later, a State Department spokesman said the US Government could not confirm reports: “Quite frankly, it’s Syria. We don’t have eyes on the ground.”

A local activist summarizes the situation for the US-trained rebels:

Sending in the 54 and then bombing JAN a few miles away from their positions — implying the 54 acted as spotters for the US Air Force — looks like constructing a case that “See, all our well-meant support is hopeless”.

Good folks say the US was totally aware that the solely anti-Islamic State soldiers would find their butts in a Jabhat al-Nusra jail shortly after crossing the border.

There’s only disagreement about the motivation of US actions: evil intention vs. plain stupidity.

Another reliable local source said, “The US knew, and received warnings from several factions, that Jabhat al-Nusra cannot and will not retaliate for USAF strikes, but will ‘take care of’ US proxies on the ground when necessary.”

Colonel Abdul Jabbar Oqaidi of the Free Syrian Army backs Turkey’s proposals for safe zones in northern Syria, in an interview with CNN:

Oqaidi also discusses recent victories by the rebels in northwest Syria — “We are very close to Assad’s strongholds on the Mediterranean” — saying that the Assad regime now controls only 20% of the country.

The WFP said that a last-minute US donation of $65 million had kept food aid going, but that funding in Jordan is not secured beyond August, even at a reduced level.

“This timely contribution has helped us avoid major cuts, but unless other donors step up to the plate, it will be only a matter of months before we face the same situation again,” said WFP’s regional director Muhannad Hadi.

Jordan hosts 629,000 of the more than 4 million Syrian refugees, with about 100,000 in camps and the rest in Jordanian communities. About 440,000 have been receiving WFP food voucher.

Aid to refugees in Lebanon was halved in July to $13.50 per month.

The WFP has faced persistent difficulties with financing of aid. Last December, it briefly suspended assistance before restoring deliveries after an emergency fundraising campaign.

The agency said it immediately needs $168 million to support refugees through October in Turkey, Lebanon, Jordan, Iraq, and Egypt.

The Kurdish YPG militia has demanded that Turkey halt its military flights over Syria, implied that Ankara is supporting ground operations of the Islamic State.

The YPG claimed that Turkish aircraft flew over the Kobane canton on Thursday morning, as the Islamic State launched a counter-attack against the town of Sarrin, taken by the YPG and the Free Syrian Army on Monday.

On Tuesday, rebels captured the last major regime positions in the province, taking the town of Frikka and the Zayzoun Dam and thermal power plant.

See Syria Daily, June 29: Regime Collapses in Northwest — Did Assad Give Up?

Pro-Assad accounts claimed this morning that Syrian forces had retaken the Zayzoun plant.

However, a spokesman for the Jaish al-Fateh rebel coalition said that more than 40 regime troops were killed and more than 120 wounded, and that two tanks had been captured.

The Idlib News Network also reported more than 40 deaths, with 20 of them in an elite unit commanded by Colonel Suhail “The Tiger” Hassan.

The Turkish relief agency IHH said the cause is unknown.

More conflicting claims are circulating on Friday as the Hezbollah-regime offensive against Zabadani, about 31 km (19 miles) northwest of Damascus, enters its second month.

State media claim the Syrian military captured the Barada Mosque and buildings in the southern edge of the town, killing “terrorists” and destroying a weapon depot.

However, pro-opposition activists say rebels are continuing not only to repel the offensive but also to carry out deadly counter-attacks. They say at least a dozen troops and militia, including Hezbollah fighters, were killed in operations that included an ambush on enemy vehicles.

The Hezbollah-regime offensive started at the beginning of July, and pro-Assad outlets claimed within days that Zabadani — the first town to be taken from the regime by the Free Syrian Army, in January 2012 — would fall. However, rebel resistance has continued, with disputed claims over the casualties suffered by the Assad forces and Hezbollah fighters.