Syria Daily, July 29: Regime Collapses in Northwest — Did Assad Give Up? 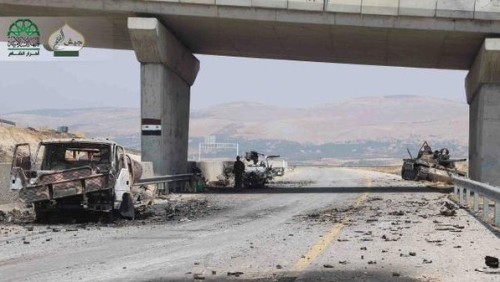 Analysis: The Speech of A Desperate President

In the most significant rebel advance since late April, regime forces collapsed on Tuesday in northwest Syria, as the opposition took the last remaining major positions in Idlib Province.

In less than 24 hours, a renewed offensive by the Jaish al-Fateh coalition took the town of Frikka — located on the highway between Aleppo, Syria’s largest city, and Latakia on the Mediterranean coast — and the surrounding area. Rebels moved into the Zayzoun dam and the Zayzoun thermal power plant, one of the largest in Syria. The offensive also advanced farther south into al-Ghab Plain in Hama Province.

Rebels and a pro-opposition journalist celebrate near Frikka, in front of the thermal power plant:

Other videos showed regime forces retreating quickly along the highway, with rebels joking, “We’re unable to keep up and we need to work more on our fitness.”

State news agency SANA tries to ignore the developments, making no reference at all to the retreat and preferring to declare that “the Takfiri terrorist organizations admitted to having inflicted heavy losses upon its equipment and the killing of scores of their members”.

The speed of the rebel victory was surprising, given that the Syrian troops and militia had held out in Frikka since late April, as almost all of the rest of Idlib Province was taken by the opposition. President Assad’s forces have also withstood rebel offensives in other areas of Syria, such as the attack on Daraa city in the south, on the al-Thala military base in the southeast, and in the western section of Aleppo city.

So did Assad and his inner circle give up the territory on Tuesday, ordering a withdrawal and further conceding a de facto partition of Syria?

On Sunday, the President signaled in a televised speech:

Sometimes, in some circumstances, we are forced to give up areas to move those forces to the areas that we want to hold onto. We must define the important regions that the armed forces hold onto so it doesn’t allow the collapse of the rest of the areas.

That statement, expanding on Assad’s first admission of defeats in early May, reinforced reports that the regime is considering a retreat to a defense line from Latakia through Homs in central Syria to Damascus and the Lebanese border. After the rebel advances in the spring, the leading Iranian general Qassem Soleimani supposedly discussed the establishment of that line with the Syrian leadership.

After those claimed discussions, Hezbollah and Syrian forces pressed their offensive — still ongoing — to take Zabadani, northwest of Damascus, and regime troops tried and failed this week to take ground in Jobar in the northeast of the capital.

An Assad order to withdraw would give the answer to a puzzled regime activist who — only an hour after responding to reports of the fall of Frikka and other areas, responded, “Is this supposed to be a joke?!” — wondered:

The SAA didn't even fight this morning near Frikkah; rather odd. They just pulled out and moved their equipment in two hours….

If Assad did give the order, both his regime and rebels can now plan on the basis of a partition of Syria for the foreseeable future. That could mean, for example, the opposition takeover and governing of Aleppo after a three-year division of the city.

But there is another question looming: what if Assad’s forces cannot hold their defense line? Gains in Hama, following the Idlib success, put pressure on Latakia. The Islamic State, although weakened by defeats in northern and eastern Syria, are still in Palmyra to the east of Homs. And rebels, despite years of sustained aerial bombardment and ground attacks, have not conceded key positions in and near Damascus.

Assad, even as he tried to cover up his concession of part of Syria — “no relinquishment of any inch of land or rights” — pointed to that question on Sunday: “We are in a crucial stage where there are no compromises and hesitation is equal to defeatism, cowardice and treason.”

Retaliation for US Airstrikes? Jabhat al-Nusra Abducts 18 of 54 American-Trained Rebels

The Islamist faction Jabhat al-Nusra has detained up to 18 of the 54 US-trained rebels in Syria, according to “local sources”.

Those abducted from the 30th Division of the Free Syrian Army include Turkmen Colonel Nedim Hassan, the leader of the US train-and-equip program, and field commander Farhan Jasim.

The men were trained in Turkey under a $500 million US program authorized last autumn by the Obama Administration. The plan was for 5,000 men in the battlefield against the Islamic State, but it has been plagued by bureaucratic and logistical problems, as well as a division over objectives: the priority for rebels is the overthrow of the Assad regime.

US Defense Secretary Ashton Carter told legislators earlier this month that only 60 fighters had been put into Aleppo Province in northern Syria. Turkish officials put the number at 54.

The US has recurrently bombed Jabhat al-Nusra positions since the first day of their aerial intervention, publicly targeting the Islamic State, in September. Scores of fighters and civilians have been killed.

US officials says the airstrikes on the “Khorasan Group”, whose members are supposedly planning terrorist attacks in the US and Europe.

An Israeli airstrike has killed regime militia in Quneitra Province in the Syrian-controlled Golan Heights.

The Israel Defense Forces have not commented.

Rumors are circulating that the target of the airstrike was Samir Kuntar, a Lebanese Druze member of the Palestine Liberation Front convicted of a multiple murder in 1979. In November 2008, President Assad presented Kuntar with a Syrian medal.

An Iranian defense website reports that two of Iran’s Revolutionary Guards, brothers Mostafa and Mojtaba Bakhti, have been killed in fighting with the Islamic State near Palmyra in central Syria.

Tunisia Reopens Embassy in Damascus — Is Egypt Next?

Tunisia has reopened its embassy in Damascus and appointed a Consul-General.

Foreign Minister Taieb Baccouche said Tuesday that Tunis respected the Arab League’s decisions, but said the cutting of ties in 2012 with the Assad regime “was not a wise decision”.

In April, Tunisia said it would restore relations with Damascus so it could track Tunisians who have joined Islamist groups fighting the regime.

Rumors are circulating that Egypt will soon re-open its embassy in Damascus.

Activists reports that civilians were killed in regime shelling of the Madeeq Citadel in Hama Province on Tuesday night.

The Local Coordination Committees says it confirmed the deaths of 18 people in the province yesterday.

Dating to the 10th century, the citadel is northeast of Hama city in the al-Ghab plain, where rebels have been advancing since April.