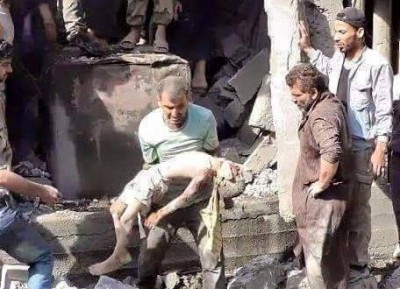 IMAGE: Aftermath of a regime barrel-bombing of Naseeb in Daraa Province in southern Syria on Monday

Almost 100 people were killed in Syria on Tuesday amid regime barrel-bombing and shelling from Idlib Province and Aleppo city in the northwest to the Damascus suburbs in the south.

The Local Cooordination Committee reported confirmation of 89 deaths, including 36 in ‎Idlib‬, 23 in ‎Damascus‬ and its suburbs, and 15 in Aleppo.

In the northwest, the Syrian military has been retaliating for the loss of almost all of Idlib Province to rebels this spring and hoping to prevent a similar fate in Aleppo, Syria’s largest city.

Most of the deaths in Idlib were in the town of Ihsim and the city of Jisr al-Shughour, which rebels captured in April. The victims in Aleppo city were in shelling on the Salheen neighborhood.

Near Damascus, the regime pounded Douma, which has been cut off for years by the Syrian military and repeatedly bombarded. The Syrian military is hoping to break Jaish al-Islam, the leading rebel faction which is based in the suburb.

Tuesday’s attack began with two vacuum missiles on the al-Hal central vegetable market, where civilians were shopping for the iftar meal breaking the daily Ramadan fast, according to a local civil defense spokesman.

“Five minutes later, as the civilians fled the raid to the sheep market one street away, a second strike with two vacuum missiles killed five others,” Mahmoud Adam said.

Aftermath of the airstrikes:

Estimates of the deaths in Syria’s four-year conflict range to more than 300,000. The Violations Documentation Center has documented 119,157 victims. Of these, 85,289 were civilians.

The Kurdish YPG militia said on Wednesday that it has restored full control of the town of Tel Abyad, on the Turkish border, after a Tuesday raid by the Islamic State.

YPG spokesman Redur Xelil said the attack was on the eastern periphery of Tel Abyad, captured on June 15 by Kurdish forces supported by Free Syrian Army units and US-led airstrikes. Three militants were killed, while another had blew himself up with an explosive belt, according to Xelil.

“The situation in Tel Abyad is over and under control,” the spokesman said. “They [the Islamic State] were preparing a big operation like Kobane,” the Kurdish center where at least 220 people were killed last week in an IS raid.

Running short of cash, the United Nations World Food Programme will halve the value of food vouchers given to Syrian refugees in Lebanon this month.

The agency said Syrian refugees in Lebanon would now get $13.50 to spend on food in the month of July. All assistance may be cut for 440,000 Syrians in Jordan next month.

About 1.6 million refugees have had food assistance cut this year and 750,000 children are not attending school.

The United Nations predicts there will be 4.27 million Syrian refugees in the region by the end of 2015.

The pro-opposition Orient News claims that 30 teenagers from a village in eastern Syria have been killed after they joined the Islamic State.

The outlet says poverty, ignorance, and lack of education were among the factors behind their recruitment by the militants. It claims that several of the teens died as suicide bombers.

An acquaintance says, “Most of my friends who joined the organization have become socially isolated. They tend to be introverts and no longer prefer to speak with us….We fear them — they will not hesitate to kill for the sake of the [Islamic State].”

US Airstrikes Against Islamic State Move West Into Aleppo Province

McClatchy News notes that US airstrikes against the Islamic State have moved west in Syria, hitting targets in eastern Aleppo Province.

US airstrikes have been concentrated in eastern Syria and near Kobane, the Kurdish center on the Turkish border that repelled a four-month Islamic State offensive in January.

However, in the last month, the US Central command has cited 11 airstrikes near the towns of Azaz and Mare’, near the frontline of fighting between the Islamic State and Syrian rebels.

There were also five airstrikes against Islamic State forces last weekend in the town of Jarablus, which the Turkish Government is considering as a base for air and ground intervention.

In contrast with previous operations, the attacks in the Aleppo and Jarablus areas did not rely on Kurdish spotters or ground troops, said a spokesman for the Syrian Kurdish militia YPG.

A local source cautioned that the move in US strikes does not necessarily move a shift to support of rebels:

They read reports that Daesh [the Islamic State] attacks fiercely there, confirmed by their drones, so they bomb Daesh assets a little away from their frontlines. It’s not a coordinated operation.

Abu Nour, the commander of the 3rd Brigade of the rebel faction Jaish al-Islam, has survived an assassination attempt in the East Ghouta area near Damascus.

The commander was shot three times on Tuesday morning. He is reportedly in stable condition in hospital.

The Islamic State is suspected of the attack. Jaish al-Islam and allied rebel factions have been trying to drive the militants out of East Ghouta and other areas in southern Syria.

A citizen journalist in Aleppo city has confirmed that a rebel “ultimatum” to the Islamic State forced the militants to lift a ban on fuel deliveries to opposition-held areas in northern Syria.

Last month the Islamic State began blocking all efforts to supply oil, going as far as to executive truck drivers who defied the ban. Last week, rebel factions responded by threatening to cut off food and supplies to IS-controlled areas.

Journalist Wael Adil told Syria Direct, “The food cutoff effected even IS-controlled areas in [the Islamic State’s center of] Raqqa, where the prices of a liter of diesel and foodstuffs rose.”

Adil added, “There is no official agreement between the opposition and IS. But the rebels announced that the road would remain open from its side, so I suppose that IS might keep the road open on its side as well.”

Regime Claims New Line of Credit from Iran — But How Much is It?

The Syrian Cabinet is claiming a new line of credit from Iran, but is only adding to the mystery by withholding details.

In July 2013, Iran extended a $3.6 billion line to Damascus, mainly for the purchase of oil and gas, food, and other essentials. Since late 2014, the regime has sought more credit when the initial line expires, but Tehran — facing its own economic difficulties — showed reluctance. Damascus initially sought $6 billion, then $4 billion, while Iran reportedly would not offer more than $1 billion.

State news agency SANA reports that the Cabinet on Tuesday discussed “implementation of the credit line agreement…signed between the Commercial Bank of Syria and the Export Development Bank of Iran in Damascus on May 19th to finance imports and projects”.

However, the article does not give a figure for the supposed agreement.

The rebel faction Jaish al-Islam has posted a 20-minute video about its execution of 18 Islamic State fighters near Damascus this spring (Warning — Graphic Images):

[YouTube has now removed the video but a Dutch news site has posted a 6-minute extract.]

Websites have also posted pictures of the Islamic State fighters before they were killed.

Last week Jaish al-Islam released a trailer for the video of men whom it said were sentenced to death by a sharia court for crimes against the people of East Ghouta, the area near Damascus which is the faction’s base.

The militants were captured by Jaish al-Islam when rebels cleared the Islamic State out of the Damascus suburb of Barzeh on April 18. The court sentence followed within days.

Jaish al-Islam decided to play upon the Islamic State’s execution propaganda, showing its fighters being marched by rebels, dressed in the orange jumpsuits that the Islamic State uses for their captives.

However, the video was controversial among rebels and activists, so it was withheld until last week, when the Islamic State released a video of 12 Jaish al-Islam fighters who were shaved and then executed.

Syrian State media are claiming that regime forces have inflicted a heavy defeat on the Islamic State in Hasakah, a week after militants moved into parts of the city in northeast Syria.

State news agency SANA asserts that the “ISIS terrorists” have been pushed into “narrow areas” in neighborhoods they have attacked, including al-Nashwa, al-Aziziyeh, and Gweiran, and that key buildings such as the Department of Immigration and Passports and the Central Prison have been defended.

Syrian officials said again that the center of Hasakah is “safe”.

Last Wednesday, the Islamic State launched its second offensive this month in and near Hasakah, taking areas in both the southwest and southeast of the city. Some reports say that Kurdish forces in Hasakah — with a mixed Arab, Kurdish, and Assyrian population — have taken control of districts as regime troops try to repel the Islamic State’s attacks.