Syria Daily, July 30: A US War With Jabhat al-Nusra? 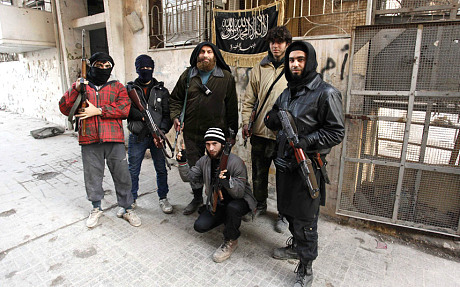 A conflict within Syria’s civil war escalated on Wednesday when the Islamist faction Jabhat al-Nusra kidnapped up to 18 of the 54 US-trained rebels in the north of the country.

A unit from Jabhat al-Nusra, whose leadership pays allegiance to Al Qa’eda, seized the men from the 30th Division of the Free Syrian Army. Those abducted include Turkmen Colonel Nedim Hassan, the leader of the US train-and-equip program, and field commander Farhan Jasim.

A Pentagon spokeswoman denied any abductions: “While we will not disclose the names of specific groups involved with the Syria Train and Equip program, I can confirm that there have been no New Syrian Force personnel captured or detained.”

Jabhat al-Nusra issued no statement about the kidnappings, but it has been under attack by the US-led aerial coalition since last September. The American airstrikes publicly targeted the Islamic State, but on their first day they hit Jabhat al-Nusra positions, killing scores of fighters and civilians.

There have been recurrent attacks, including one this week which reportedly killed four people.

US officials have said that they are dealing with the threat of the “Khorasan Group”, whose members are supposedly planning attacks in the US and Europe. The Pentagon said last week that it had killed the purported leader of Khorasan, Kuwaiti-born Muhsin al-Fadhli, in an airstrike in northwest Syria.

The abducted rebels were trained in Turkey under a $500 million US program authorized last autumn by the Obama Administration. The plan was for 5,000 men in the battlefield against the Islamic State, but it has been plagued by bureaucratic and logistical problems, as well as a division over objectives: the priority for rebels is the overthrow of the Assad regime.

US Defense Secretary Ashton Carter told legislators earlier this month that only 60 fighters had been put into Aleppo Province in northern Syria. Turkish officials put the number at 54.

The 30th Division operates in northern Aleppo Province, where rebels have been fighting the Islamic State since January 2014. Turkey announced last week that it is establishing “safe zones” in the area along its border. Ankara said the US is supporting the plan, but senior Obama Administration officials said on Tuesday that the Americans are only seeking to clear the Islamic State, rather than create safe havens or no-fly zones.

The kidnapping raises further questions about the US strategy. Just before he returned to Syria from Turkey this week, Colonel Hassan expressed concern that the Pentagon had yet to provide night-vision goggles that he had requested. He said some fighters were threatening to quit because he could not pay for their expenses.

Colonel Hassan said he had asked American trainers “if they are going to protect us”. The reply: “Our government still hasn’t announced anything that includes fighting the Assad regime.”

Surge in Typhoid in Southern Damascus Amid Lack of Clean Water

Activists and medical staff report a surge in fevers, including typhoid, in southern Damascus amid water contamination and shortages.

The past several weeks have witnessed the spread of typhoid fever due to a lack of potable water, especially after the Islamic State group (IS) closed off water supplies from al-Qadam and al-Yarmouk to Babila, Yalda, Beit Sahm and al-Tadhamon.

The regime has cut off the water to southern Damascus for over a year.

Al-Dimashqi said residents were relying on wells dug before the 2011 uprising or hand-dug wells. Shelling has damaged the sanitation system, leading to contamination of drinking water.

The Southern Damascus General Medical Board, a collective of local doctors, issued a statement describing the outbreak as “alarming”. It said that it received 5844 cases of fever in July.

The UN envoy for Syria, Staffan de Mistura, has said that peace talks are not possible to end the crisis.

Addressing the UN Security Council, de Mistura said that months of effort had established that neither the regime nor opposition were ready for the talks. He proposed instead that four U.N.-led working groups be established to investigate the implementation of “a road map to peace”.

“Sadly there is still no consensus on the way forward on the Communique or yet a formalized negotiation,” said de Mistura. “While common ground exists, the questions over devolution of executive authority to a transitional body, let’s be honest with ourselves, remains the most polarized element of the Communique.”

The envoy said the working groups could be a step toward a “Syrian-owned framework document” that would provide for a transitional body, procedures for national dialogue, a constitution drafting process, and transitional justice issues.

State media and pro-Assad outlets are claiming a fightback by the Syrian military after their significant losses on Tuesday in the Idlib-Hama corridor in northwest Syria.

On Tuesday, Syrian troops and militia retreated from Frikka, their last major position in Idlib Province, and nearby territory such as the Zayzoun dam and thermal power station. The rebels also advanced farther in the al-Ghab Plain in neighboring Hama Province, taking a series of villages in the northeast of the area.

See Syria Daily, July 29: Regime Collapses in Northwest — Did Assad Give Up?

SANA is still not admitting Tuesday’s losses in and near Frikka.

28 Killed in Regime Shelling of Saraqeb in Idlib Province

The Local Coordination Committees report that 28 people were killed on Wednesday in regime shelling of Saraqeb, a town in Idlib Province in northwest Syria.

Saraqeb is southeast of Idlib city, the provincial capital which was captured by rebels in their advance through the province this spring. The Syrian military has bombarded cities, towns, and villages throughout the province since then, even as President Assad’s troops have lost more territory on the ground.

The LCC confirmed 62 deaths across Syria on Wednesday.