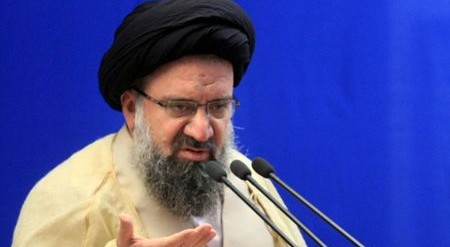 A leading cleric in Iran has called for unity over the consideration of the July 14 nuclear deal with the 5+1 Powers.

Ayatollah Ahmad Khatami, a Tehran Friday Prayer Leader and member of the Assembly of Experts, appealed for “unanimity on national interests” on Thursday. He assured that the Supreme Leader and government officials will only accept a “good deal” with the 5+1.

Tensions have arisen over the procedure for approval of the deal. Hardline MPs, including those linked to former President Mahmoud Ahmadinejad, have insisted that Parliament should be able to vote on the agreement. The Government says that Parliament can give an advisory opinion, but that approval rests with the Supreme National Security Council.

Earlier this week, the dispute led to angry scenes between MPs and Speaker of Parliament Larijani, when the hardliners said that “the dog of Ahamdinejad and [Ahmadinejad’s former advisor Esfandiar Rahim] Mashaei have more dignity” than the Speaker.

Larijani responded to the insult — dogs are considered unclean by many Muslims — “How can it be that someone’s dog has more dignity than a Muslim when I have declared that Mohammad was the prophet of God?”

Rumors are circulating that some of Ahmadinejad’s former advisors are being threatened with arrest, in an attempt to blunt the criticism of the handling of the nuclear deal.

On Thursday, Ayatollah Khatami said that treaties are subject to the approval of Parliament and insisted, “These procedures should not lead to discord and division.”