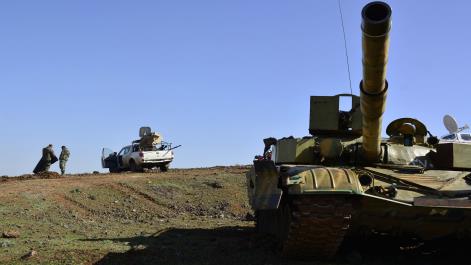 Two days after capturing the Brigade 52 army base in Daraa Province in southern Syria, rebels began their assault on nearby al-Thala airbase on Thursday.

Al-Thala has many of Syria’s advanced aircraft, including a squadron of MiG-24 fighters. It was isolated after the rebels swept into the Brigade 52 base, one of the largest in Syria, and nearby villages within eight hours on Tuesday.

Rebels briefly moved into part of the base before they were pushed back by ground resistance, including tank fire, and airstrikes. They withdrew to a nearby village.

Syrian State media put out the line, from a “military source”, that more than 100 rebels were killed and dozens of armored vehicles destroyed in their attempts to infiltrate the base.

State media also posted pictures claiming to be of Syrian troops, including the prominent commander General Issam Zahreddine, in the village of Thala close to the base.

Claimed photo of Syrian troops and a correspondent inside the base: 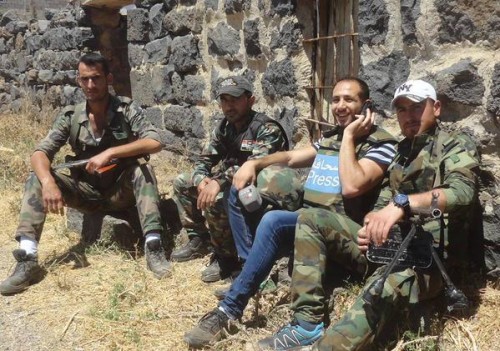 A MiG jet fighter of the Syrian Air Force was downed, by rebel fire or by technical problems, near Busra al-Harir in Daraa Province on Thursday. It was unconfirmed whether the MiG was involved in airstrikes near al-Thala when it crashed.

Rebels of the Jaish al-Yarmouk faction fire a portable air-defense missile (MANPADS) at a Syrian warplane in Daraa Province on Friday, apparently missing the target:

Rebel factions, including the Sham Front and Islamic Front blocs and the Ahrar al-Sham faction, have issued a statement condemning Wednesday’s killing of 23 members of the Druze community in the village of Qaib Loza in Idlib Province in northwest Syria.

The clash, in which Jabhat al-Nusra fighters also died, began when a unit of the Islamic faction tried to build an extension to a house taken from a Druze resident who had left the country.

Rebels say they have retaken the village of al-Bal in northern Aleppo Province as they push back an Islamic State offensive that began last month.

Media activists of rebel units also say that there are large clashes in the town of Sawran near the Turkish border.

The Islamic State took Sawran and al-Bal at the end of May as they attacked along a 25-km (16-mile) front north and northeast of Aleppo city.

A rally in Saqba, near Damascus, celebrates the recent victories of rebels in Daraa Province in southern Syria:

In an interview with Reuters, Deputy Foreign Minister Feisal al-Mikdad has defied rebel advances with the claim that the regime’s position is better than in the past:

I think Syria was under more pressure [before].

Even Damascus was under a direct threat. Nowadays Damascus is absolutely not under such a threat. Homs is safe, Hama is safe, now al-Qalamoun [on the Lebanese border] is safe.

He was speaking after three months of gains against government forces by hardline Islamist groups including Nusra Front in the northwest, Islamic State in the east, and an array of other insurgent factions in the south.

Mikdad admitted, “Some advances have been made whether we like it or not,” but he continued:

What makes us optimistic are two things. The first is the increase in the strength and morale of the Syrian Arab Army.

The second is the strong support we have received and will receive from our allies, whether it be the Islamic Republic of Iran, or the Russian Federation or from our main ally Hezbollah.

We hope the performance of the Syrian army will be different in a few days, if not a few weeks.

President Assad used a Thursday meeting with members of the Holy Synod of the Universal Syriac Orthodox Church for photos and statements against “terrorism”.

According to State news agency SANA, Assad denounced “terrorist aggression against the region and the Takfiri extremist mentality underlying it”, but said the Syrian people would defeat the “subversive mentality” through their history and culture. 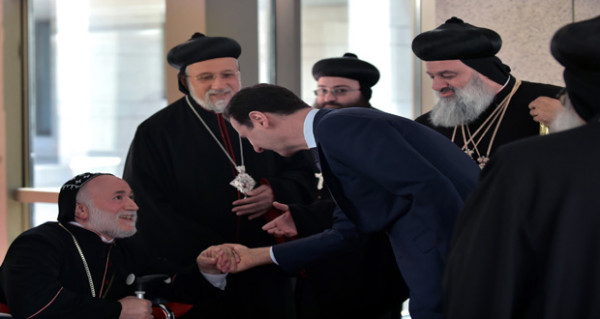