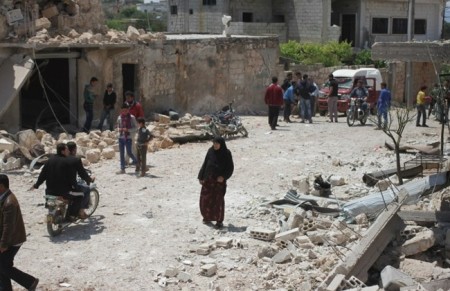 al-PHOTO: Ain Larooz in northwest, in the area where 23 Druze were killed by a Jabhat al-Nusra unit, after a regime airstrike in May

A reliable source in Idlib Province in northwest Syria confirms the claim that a Jabhat al-Nusra unit killed 23 members of the Druze community in the area.

The source said the incident occurred in the village of Qaib Loza, which has a sizeable population of Druze, a religious group who are found mainly in Syria, Lebanon, and Israel.

The Jabhat al-Nusra unit was led by “Safina”, a Tunisian. The source said that, since he took charge, the unit has been suspected of a series of aggressions against both Sunni and Druze people. In particular, Safina would seize the houses of Sunni or Druze who left on a visit to Lebanon, saying that his fighters had more right to them.

This week, Safina reportedly seized a Druze house, saying he wanted to build a second floor and occupy it. A neighbor asked that the extension be moved away a bit from his home, out of fear of the house being targeted by Syrian warplanes.

In the ensuing argument, weapons were drawn and shot fired. The neighbor was killed, as was one of Safina’s fighters. The neighbor’s brother then arrived with a weapon, and more shooting killed three Druze and another fighter.

“Safina” told other Jabhat al-Nusra units that the Druze were starting an armed rebellion. The claim fed the conflict, eventually leading to 23 Druze slain either by Safina’s unit or al-Nusra allies, even as rebel brigades tried to calm the situation.

A resident of a neighboring village offers a similar account to Syria Direct:

Nusra had previously taken control of houses whose owners left a long time ago….Nusra was building a wall inside one of the houses in order to split it up; the house owner’s relatives objected, and a fight broke out.

Jabhat a-Nusra tried to arrest members of the family that objected. Some Nusra fighters readied their rifles and others moved to put the family into a car. One Nusra member put his rifle aside so he could push one of them in more easily.

After their comrade was killed, Nusra called for backup over their walkie-talkies and opened fire on passersby and nearby houses, killing 23 innocent people, none of whom picked up a weapon or even thought of resisting. If not for the mediation of rebels from Kufr Takharim, God only knows what would have happened.

Commanders in Jabhat al-Nusra have now replaced Safina and his unit with a group from the nearby town of Harem. The Tunisian and his men are supposedly being interrogated, although it is unclear if the investigation will lead to punishment by al-Nusra, let alone an independent Sharia court.

In March, an opposition activist told Syria Direct of the injunctions of Jabhat al-Nusra units on the Druze community in the mountainous area of Jabal a-Summaq, where Qaib Loza is located:

After JN kicked the Islamic State (IS) out of Idlib, they told us that they wouldn’t protect us unless we converted to Sunni Islam, prayed and issued an official statement saying that we’ve left the Druze faith. As of now they have yet to attack us. As long as we appear to be following their rules, they consider us “brothers” in Islam.

They’ve forced us to comply with a number of orders and decrees, including the destruction of our shrines. They dug up the tombs of a number of our saints, however we didn’t protest. They forced our women to wear strict orthodox Islamic garb, and to give up their traditional Druze clothing.

They’ve also threatened us saying that if the al-Hisbeh (sharia law) police found anyone on the street during prayer time, that that person be punished. Same for women who don’t follow the mandatory clothing requirements.

The worst is what they’ve done in schools….They arrived in our village and separated all the male and female students, insisting that they be taught separately, and only by teachers of the same gender.

The Jaish al-Fatah rebel coalition swept through Idlib Province this spring, taking the provincial capital of Idlib city, the city of Jisr al-Shughour, the town of Ariha, and military bases. After last week’s rebel offensive along the M4 highway in the Idlib-Hama corridor, regime forces have been reduced to a defensive position in the town of Frikka.

This week’s incident may have wider repercussions. Rebels have advanced to the borders of Suwaida Province, which has a large Druze population, in the southeast — on Tuesday, the Southern Front bloc rapidly took the Brigade 52 base, one of the largest in Syria.

Rebel sources say that the Southern Front is trying to give reassurances to the Druze community that they will cause no harm as they endeavour to clear southern Syria of regime forces. On Wednesday, Druze leader Walid Jumblatt supported the effort with a call for reconciliation and unity between Druze and the Syrian opposition.

The sources note that Jabhat al-Nusra has a far more limited role in the rebel offensive in the south than in the north.

On Thursday, Jumblatt responded to news of the Idlib killings with Twitter messages cautioning political figures against attacking the rebels.

However, the head of Lebanon’s Tawhid Party, Wiam Wahhab, called on Druze in Suweida Province to arm themselves. In a televised speech, the former minister said:

The people of Daraa [Province] are our brothers, but my problem is with the criminal foreigners who came to Syria. Anyone who deals with the Nusra Front is unwelcome in Lebanon….Whoever kills us in Idlib, we will kill him in Lebanon. We will not allow any Nusra Front member to stay.

The Turkish-based opposition Syrian National Coalition condemned the attack while praising rebel factions, including Ahrar a-Sham, for their intervention to end the violence. A statement said Coalition President Khaled Khoja spoke with Walid Jumblatt and other leaders of the Druze community about “preserving the unity of the Syrian people” and “protecting all components of Syrian society”.

State news agency SANA is denying that al-Thala airbase (see map) in Daraa Province has been taken by rebels, two days after the opposition captured the nearby Brigade 52 army base.

A “military source” said several attempts at infiltration had been foiled, with more than 100 rebels killed and dozens of armored vehicles destroyed.

Pro-opposition accounts on social media say rebels moved into part of the base before they pulled back to a nearby village.

From a spokesman for the Southern Front rebel bloc:

A report from Iran’s al-Alam TV near the airbase:

Al-Thala was isolated after the rebels swept into the Brigade 52 base, one of the largest in Syria, and nearby villages within eight hours on Tuesday. The airbase has many of Syria’s advanced aircraft, including a squadron of MiG-24 fighters.

An 11-minute video of the rebel capture of the Brigade 52 base:

Revolutionary Guards General: Iran Has Not Dispatched 1000s of Troops to Syria…Yet

A Revolutionary Guards general has said that the Supreme Leader has not yet decided to send thousands of troops and militia to Syria.

Speaking to members of the Basij paramilitary, General Rahim Nowi-Aghdam, said, “The Supreme Leader does not want to send armies to Iraq and Syria at the moment, but he confirms that military commanders [have been] sent so that their capabilities may be put to use in those two countries.”

Last week, Arab media exaggerated a report by an Iranian group, Ansar-e Hezbollah, into the claim that 50,000 Iranian troops had been despatched to prop up the Assad. Hezbollah’s Al-Manar outlet said 20,000 Iranian, Iraqi, and Lebanese fighters were being deployed. An official in the Assad regime then put out the number of 7,000 Iranian, Iraqi, and Afghan personnel, rising to 10,000 to defend Damascus and reclaim parts of Idlib Province in northwest Syria.

The claims followed a visit by the head of the elite Qods Force, General Qassem Soleimani, to Latakia in western Syria and Damascus, assessing the situation after the rebel takeover of almost all of Idlib Province and their advance into neighboring Hama Province.

See Iran Daily, June 10: “We Will Stand by Assad Regime in Syria”
Syria Feature: Is Iran Really Preparing to Send 50,000 Troops to Save Assad?

While pulling back the claims, General Nowi-Aghdam called on Iranians to fight in Iraq and Syria:

If you do not volunteer to fight…I will go myself, and I will martyr myself in the defense of [the shrine] of Sayyida Zeynab [in Damascus] or the Shiite shrines in Iraq….

If we do not [stop] the Islamic State, we will have to fight it in Khuzestan [in southwest Iran] and Tehran.

Foreign Ministry spokeswoman Marzieh Afkham also denied an influx of Iranian troops, telling reporters, “Raising issues like the presence of Syria’s friends, including Iran, in the country is baseless. The Syrian nation and government enjoys the power to resist.”

She reiterated that Iran is only sending humanitarian aid to Syria.

Footage of the crash of a Syrian warplane near Busra al-Harir in Daraa Province in southern Syria:

It is unclear if the MiG aircraft was downed by rebel fire or a technical problem.

In April, the regime suffered heavy losses in a failed attack on Busra al-Harir, northeast of Daraa city. 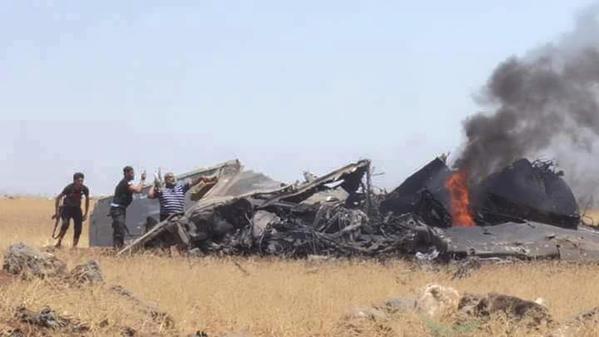 The troops were killed in a recent failed offensive on Lajat in Daraa Province in southern Syria. The opposition media center posting the video claims the soldiers were Iranians fighting alongside Assad forces.

An uplifting contrast to daily scenes of destruction in rebel-held areas of Aleppo — children celebrate the last day of term in their school:

The Open Syria project of Syria Direct recently identified 22 schools in Aleppo and Damascus that were destroyed or damaged between January 2014 and May 2015.