Syria Daily, May 7: Assad Tries to Rally “His People” Against Regime Defeats 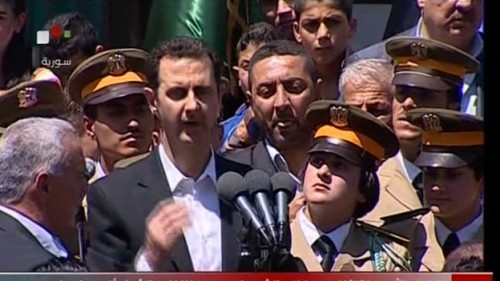 Special: 3 Reasons Why Assad Will Lose The War
Analysis: US Publicly Backs Away from “Safe Havens” for Civilians

Any appearance by President Assad in public is notable, given how infrequent they are.

However, Wednesday’s speech at a Martyrs Day ceremony in Damascus was particularly significant. For the first time, Assad was making a statement that was not just proclaiming eventual victory, but trying to rally Syrians against regime defeats.

Effectively recognizing rebel advances that include the capture of cities and towns from the northwest to the south, the President called for “society” to raise the morale of the Syrian Army:

Assad tried to minimize the scale of the rebel victories by blaming those who “spread frustration and despair over one loss or another or because they are influenced by external propaganda”, but he acknowledged, “Some of them [Syrian forces] are fighting and emerging victorious, and others are fighting and retreating when circumstances necessitate that.”

Even more significantly, he recognized — and raised the stakes — over the rebel capture of the city of Jisr al-Shughour, in northwest Syria near the Turkish border, in late March. The implicit acknowledgement of the loss of the city, on the main route from Aleppo to Latakia — a base for regime power, in western Syria on the Mediterranean — was followed by the promise that a group of about 200 trapped Syrian troops would be rescued from the National Hospital in Jisr al-Shughour:

Heroic battles didn’t start with the battle for Aleppo Prison [breaking a rebel siege in May 2014], nor will they end with the siege on Jisr al-Shughour Hospital….The army will soon reach the brave soldiers who are currently besieged.

However, rather than providing reassurance, that promise may provoke more questions. Assad’s forces, including elite units, are fighting rebels in villages near Jisr al-Shughour, as well as trying to counter the opposition’s offensive in the Idlib-Hama corridor to the south of the city. The ground troops have been supported by daily bombing, killing scores of civilians, across Idlib Province.

But what if the men — unlike those in Aleppo Prison — can’t be retrieved, even with the President’s best ground troops? Does that become the marker not just for a one-off failure, but for the gradual turn of the four-year conflict against Assad?

One shell landed near the convoy, while another missed.

The last Red Crescent aid convoy that entered Douma, under siege by the Syrian military, was in October 2014.

The Red Crescent did not point at any party over the attack, but the Douma Local Coordination Council blamed the regime.

“The larger caliber mortar shell came from the mountains in the north which are under the regime’s control,”said Abu al-Hassan al-Andalusi, who works with doctors and medical staff in East Ghouta and was present at the scene of the attack.

The Islamic State has reportedly attacked in the provincial capitals of Hasakah and Deir ez-Zor in eastern Syria.

In Hasakah, Islamic State fighters dressed as Kurdish police detonated suicide bombs in a Kurdish base on Wednesday, while the militants launched mortars into nearby civilian neighborhoods, according to pro-Kurdish ARA News.

Seven Kurdish police were reportedly killed, as were all the Islamic State attackers. Three civilians were killed in the shelling.

The Islamic State has positions near Hasakah about three km (2 miles) to the northwest in the town of Tauq al-Milh and three km to the south-southwest close to the village of Rada Shaqra.

In Deir ez-Zor, an Islamic State suicide bomber rammed a Hummer packed with explosives into a regime checkpoint in the a-Sina’ah district on Wednesday. An opposition journalist claimed dozens of regime soldiers were killed.

The Islamic State is also putting pressure on the Deir ez-Zor airbase, about 3.5 km (2.2 miles) southeast of the bombed checkpoint.

Rebels Claim Success in Continued Fighting in Jobar in Damascus

The rebel faction Jaish al-Islam is claiming success in fighting in Jobar in northeast Damascus, with the captured of fortified buildings and the killing of at least 20 Syrian troops.

Jaish al-Islam, based in nearby Douma, asserts that it achived “90% of its battle goals”.

Rebels took Jobar in February 2013. Since then, regime forces have tried to retake the area, following up sustained aerial attacks with ground assaults.

Reports are claiming that the Islamic State has been trying for days to overrun the regime’s Kweiris airbase, east of Aleppo city.

The latest claims are that the militants, amid heavy fighting, have taken military housing but have not yet taken over operational positions.

The airbase has long been disused but was the regime’s primary air training facility before the Syrian conflict. It also came under attack last summer, after the Islamic State took other bases in Aleppo, Raqqa, and Hasakah Provinces.

Claimed photo of Syrian troops inside the airbase: 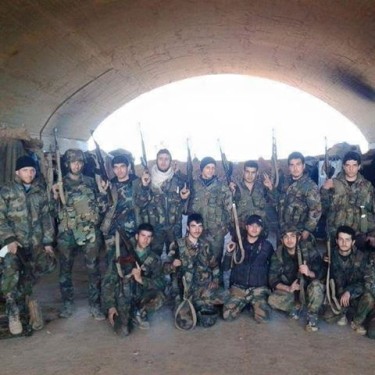