Syria Analysis: US Publicly Backs Away from “Safe Havens” for Civilians 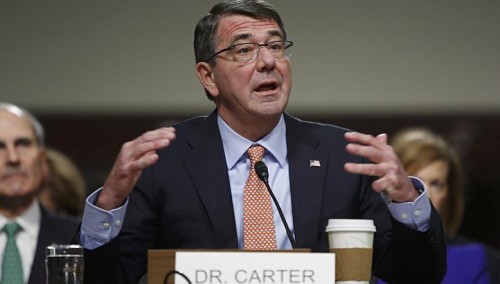 UPDATE 1730 GMT: The US has announced the start of a long-delayed program to train and equip up to 5,000 Syrian rebels.

US officials said the training has begun in Jordan. Other sites are in Saudi Arabia, Qatar, and Turkey, which has said its site will begin operations on May 9.

Pentagon officials say more than 3,750 Syrian fighters have volunteered for the training program, but only about 400 have completed pre-screening. About 450 coalition forces will train the rebels, including about 350 Americans.

The Obama Administration has allocated $500 million for the program for this year. It was supposed to begin in early March.

The US intends for the fighters to combat the Islamic State, but rebel groups want the effort to be directed at the overthrow of President Assad.

The Obama Administration has publicly distanced itself from any initiative for “safe havens” for civilians inside Syria.

Defense Secretary Ashton Carter (pictured) told legislators on Wednesday that creation of a humanitarian safe zone would entail a “major combat mission” requiring US troops to fight the Islamic State as well as the Assad regime.

Carter’s remarks come soon after the Jordanian regime publicly called for the establishment of a zone in southern Syria to protect displaced civilians as well as residents. Diplomatic sources told EA that Saudi Arabia, the UAE, and Turkey are also involved in planning. Officials of the Southern Front rebel bloc said they were “preparing for large-scale military operations and have received promises of Arab air cover, or at least the provision of anti-aircraft rockets”.

Last year, Turkey called for the establishment of a no-fly zone from Syria’s Mediterranean coast across the north to the Syrian-Iraqi border, but Ankara has failed to garner enough support to pursue implementation.

Carter’s comments do not rule out behind-the-scenes American backing of others to set up the southern safe havens, for example, through sharing of intelligence. Diplomatic sources told EA last week, “Washington has given permission, even if it will not join the effort.”

The Chairman of the US Joint Chiefs of State, General Martin Dempsey, told Senators that commanders have drawn up contingency plans for a safe zone in consultation their Turkish counterparts.