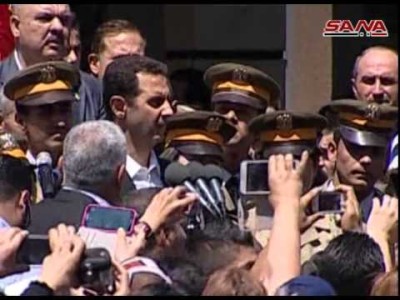 President Assad appeared on Wednesday in public, attending a ceremony for the children of slain Syrian forces on Martyrs Day.

Assad invoked Syrian nationalism, including resistance to the Ottoman Empire in the early 20th century, and said, “Victory requires faith in the value of martyrdom, faith in God, faith in the necessity of victory, and faith by the society in those who are fighting for the homeland.”

He then implicitly acknowledged recent defeats for the Syrian military as well as claiming triumph in the end:

The society must do its duty and strengthen the army’s morale rather than always expect the army to raise the society’s morale, as this process should be reciprocal, not like what some do when they try to spread frustration and despair over one loss or another or because they are influenced by external propaganda….

Assad even pointed to the rebel capture of the key city of Jisr al-Shughour in Idlib Province in northwest Syria on April 26, as he tried to say this would be reversed with the rescue of trapped Syrian forces:

Heroic battles didn’t start with the battle for Aleppo Prison [breaking a rebel siege in May 2014], nor will they end with the siege on Jisr al-Shughour Hospital….The army will soon reach the brave soldiers who are currently besieged.