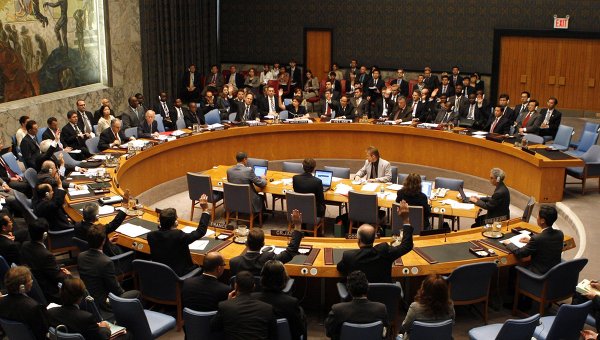 Op-Ed: How the Assad Regime Wins the Propaganda War as It Kills Civilians
Analysis: Showdown South of Damascus — Assad’s Hopes for Victory Rely on Hezbollah and Iran

The UN Security Council toughened sanctions on both the Islamic State and the rebel faction Jabhat al-Nusra on Thursday, unanimously adopting a Russian-drafted resolution.

The measure bans all trade in antiquities from war-torn Syria, threatened sanctions on anyone buying oil from the two groups, and urges states to stop kidnap ransom payments. The resolution is legally binding: it can be enforced with economic punishment but not military force.

The resolution has more practical relevance for the Islamic State, which is generating income from its takeover of oil and gas fields in both Iraq and Syria; however, the inclusion of “Al Qa’eda-linked” Jabhat al-Nusra, given its place in the fight against the Assad regime, paved the way for political maneuvers beyond the Council decision.

Syria’s Ambassador to the UN, Bashar al-Jaafari, immediately turned the decision into an attack on any foreign state backing rebels, targeting Syria’s neighbors Jordan and Turkey:

Unfortunately, Jordan, a member of the Security Council, has adopted for years the policy of training, supporting and sending terrorists across the joint border into Syria to kill Syrians. The Jordanian authorities see terrorists in the Syrian city of Al-Raqqa [held by the Islamic State], but do not see them while crossing its border towards Syria and Iraq.

The US Ambassador, Samantha Power, countered with a jab at the Assad regime, “Just as we condemn the monstrosities perpetrated by (Islamic State) we must also continue to condemn the brutality of the regime, which has long since lost the legitimacy to lead.”

UN Envoy: Assad Must Be Part of Political Solution in Syria

In a notable shift of position, UN envoy Staffan de Mistura has that President Assad must be part of any political resolution in Syria.

De Mistura said at a joint press conference with Austrian Foreign Minister Sebastian Kurz in Vienna, “President Assad is part of the solution. I will continue to have very important discussions with him.”

The UN envoy met Assad in Damascus on Wednesday, discussing the envoy’s proposal for a “freeze” to fighting in Aleppo, Syria’s largest city.

De Mistura’s predecessors, Kofi Annan and Lakhdar Brahimi, had pursued plan in which President Assad would step aside for a transitional government.

But the current envoy indicated the change in approach was needed because “the only one who takes advantage of [the lack of resolution] is ISIS Daesh [the Islamic State]….[It is a] monster waiting for this conflict to take place in order to be able to take advantage”.

In contrast to de Mistura, Kurz said, “Assad will never be a friend or even a partner.”

The opposition Syrian National Coalition called on Thursday for international action to check the Assad regime’s mass killing of civilians in Douma, northeast of Damascus.

In the last week, Syrian airstrikes and bombardment have killed at least 250 people in and near Douma.

Coalition President Khaled Khoja urged the United Nations “to recognize the right of the Syrian people to live, and to take immediate action to salvage what has remained of Douma, just as they rushed to rescue the town of Ayn al-Arab (Kobane) from the Islamic State’s onslaught”.

Hr continued, “The Assad regime’s killing of children and the elderly with rockets, barrel bombs, and toxic gases is as a crime as horrible as ISIS’s slaughtering and burning of people alive.”

Khoja also called for the opening of humanitarian corridors and lifting of the protracted regime siege, as well as asking the “heroes of the Free Syrian Army to relieve their comrades in Douma and [the Homs section of Al Wa’er and to protect civilians from Assad’s vengeful attacks”.

He defended the response of Jaish al-Islam, the leading rebel faction in Douma, with rocket attacks on military positions inside Damascus. This as a “legitimate right to self-defense [with] the need to preserve the lives of civilians”.

Jaish al-Islam said on Thursday that it would resume the rocket launches “without warning” if regime attacks continued on Douma. There were no reported deaths from the town yesterday.

Activists have circulated a vivid “river of blood” photo, claiming to be from this week’s air assault: 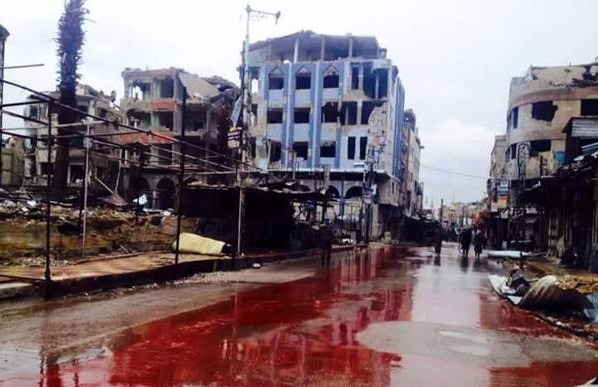 The flow of claims from the regime counter-offensive south of Damascus has ebbed, in part because of a media blackout by rebel groups.

Both sides continue to put out images of claimed success. Syrian State media highlights a visit by Defense Minister Fahd Jassem al-Freij to unspecified “military sites and towns in the southern region”. 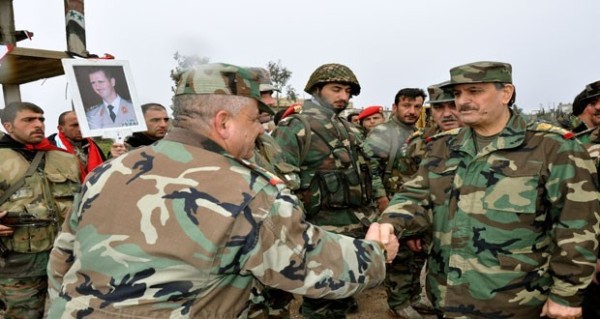 Opposition accounts circulate video of a visit by a Free Syrian Army colonel to a captured checkpoint between Deir al-Addas and Kafr Nasij on the 20-km (12-mile) battlefront across southern Damascus and northern Daraa Provinces:

And pro-opposition Orient News — combining both optimism and a poke at Iranian leadership of the Assad counter-offensive — declares, “[Iran’s Qods Forces commander] Qassemi Soleimani lost his first battle against the rebels of Horan [Daraa Province]”: