Ukraine Analysis: A Deal Which Is “Neither Breakthrough Nor Disaster” 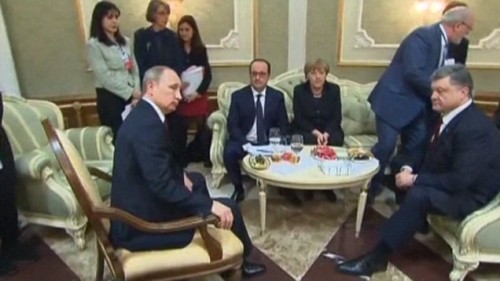 Writing for The Conversation, Stefan Wolff of the University of Birmingham assesses Thursday’s “deal”, brokered by Germany and France, between Ukraine and Russia:

After all night talks in the Belarusian capital Minsk, the outcomes of the four party talks in the so-called Normandy format (Ukraine, Russia, France, and Germany) have neither brought a major breakthrough or a complete disaster. As a deal, it is not a solution, but perhaps a step towards one.

It almost seems to be business as usual – yet another ceasefire deal and commitments to further negotiations on a more durable political settlement – but, by the standards of this crisis, this is not the outcome Ukraine’s people may have hoped for. Not least because the deal, as soon as it was announced, ran into its first set of problems with rebels demanding Ukrainian forces withdraw from the strategic town of Debaltseve before they would agree to the ceasefire.

At the very least, this might mean two more days of heavy fighting before the ceasefire starts on 15 February, at worst it might mean the deal will never be implemented at all.

In the run-up to last might’s summit, the crisis in Ukraine seemed to head towards a major juncture, along with relations between Russia and the West and within the Transatlantic alliance. The weeks before the summit in Minsk has seen intensifying diplomacy, escalating rhetoric, increased fighting on the ground, and a worsening humanitarian situation.

The “Best Case” Was Impossible

A comprehensive agreement between Ukraine, Russia (and its proxies), France and Germany would obviously have been the most desirable outcome, but was also highly unlikely. The military balance of power in eastern Ukraine clearly favours the rebels, who have made substantial territorial gains beyond the separation lines established in the context of the Minsk Agreement of September 2014. They and their backers in the Kremlin still have little incentive to accept the Franco-German peace plan.

Ukraine, too, had no particular reason to sign up to a comprehensive deal either. While clearly under military and economic pressure, the facts on the ground only came about after open violations of the September 2014 agreement, and a peace deal would implicitly deem those violations acceptable, and potentially encourage more of the same.

Washington’s talk of delivering arms to Ukraine offers Kiev a ray of hope that help will be at hand if no new deal is reached in Minsk and the government’s military predicament increases further.

The summit both avoided total collapse and fell short of stunning success. The resulting deal is hardly in line with Western interests, but it’s a decent second-best option for Russia and Ukraine – at least for now.

Much like the September agreements, we will probably see at least a temporary lull in violence and a stabilisation of the front lines with each side shoring up its positions and hoping for an opportunity to make a more decisive military push. But as each side consolidates, and regroups, the likelihood of success of such an attempt at forcing a military solution will decrease.

A Platform for the Next Step

Most importantly, the outcome of the Minsk talks offers the West (and particularly the EU) a reasonably dignified way out of the current crisis.

It avoids causing a rift between NATO and the EU over arms deliveries to Ukraine in the middle of an ongoing war, prevents a near-complete collapse of relations with Russia, and helps avoid a further escalation of the war and the deepening of what’s already a major humanitarian crisis.

And while by no means a firm prospect, this deal may also help begin the long-term project of rebuilding Europe’s relations with Russia, not just stopping them from falling apart. What the West needs to accomplish this, is a proper strategy of how to deal with Russia, rather than the ad-hoc fire-fighting responses that have characterised much of Western policy towards the Kremlin for too long now.

A true rapprochement will not be possible to start over Ukraine as things stand, but by avoiding a complete freeze, relations can be rebuilt from the outside in. In other words, with Ukraine brought back from the brink, the West can get on with finding common ground with Russia in areas where their interests are far less divergent: Islamic State, as well as on Iran, Yemen, and Libya, to name but a few.

Such high-level confidence building would of course be useful in itself. But it could also point the way to a more sustainable solution for Ukraine – one that can build on the outcome of the latest Minsk round of negotiations, but eventually must go significantly beyond the limited progress that has been possible to achieve now. 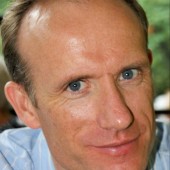