Syria Op-Ed: How the Assad Regime Wins the Propaganda War as It Kills Civilians

John Adalah, an observer and supporter of the Syrian Revolution, writes for EA:

How difficult is it for Syria’s rebels to get the truth out?

They lack the huge propaganda machine the Assad regime controls. This machine is backed by Russia, steered by the KGB textbook, and supported by willing as well as accidental helpers in most western media — a media who often relay what a British-based “monitoring group” provides, even if this is a mixture of social media chatter, rumors, regime propaganda, and sometimes facts from the ground.

See also Syria Special: How and Why Media Are Failing to Report the War

At the end of the day, a Western journalist cannot do much fact checking, since traveling to Syria is far too dangerous, right?

If the latter assertion is true, the former is false. There is a steady stream of daily information and years of footage that has come out of Syria. There are still trusted media activists who can do the fact-checking for journalists. However, that takes effort amid lots of noise and few clear signals. Far easier, facing a deadline, to take the easy route and grab a dramatic if often unsupported assertion from the monitoring group, Syrian State media, or the Islamic State.

So Syrian rebels, communities, local coordination committees, and individuals — who four years ago had high hopes about world-wide media coverage and took great personal risks to support journalists reporting on the Syrian Revolution — do not reach out any more. They are disappointed and frustrated by a world and a media who, after the hype of the early months, forgot about the mass killing that the Assad regime still commits each day — a world and a media who turned away from the 11 to 12 million Syrians, 50% of the pre-conflict population, displaced when a dictator declared war on his people.

Besides the disappointment and frustration, there’s another reason for the lack of a functioning PR machine operated by the Syrian opposition inside the country. Abdurrahman Saleh, the spokesman of Jaish al-Islam — a leading faction which is part of the Islamic Front and fights alongside the Free Syrian Army — says bluntly:

First, we are busy securing food and life necessities for our people.

Second, we are in a ruthless war that does not allow us enough time to focus on media, or on the external view of our struggle for peace and freedom in general.

Also, most media activists inside Syria are not specialists, but citizens who do their dangerous job without proper training, lacking any support. That is why their job shouldn’t be underestimated, because they are doing their best.

This statement echoes countless voices from within Syria to which I have listened in the last three years. 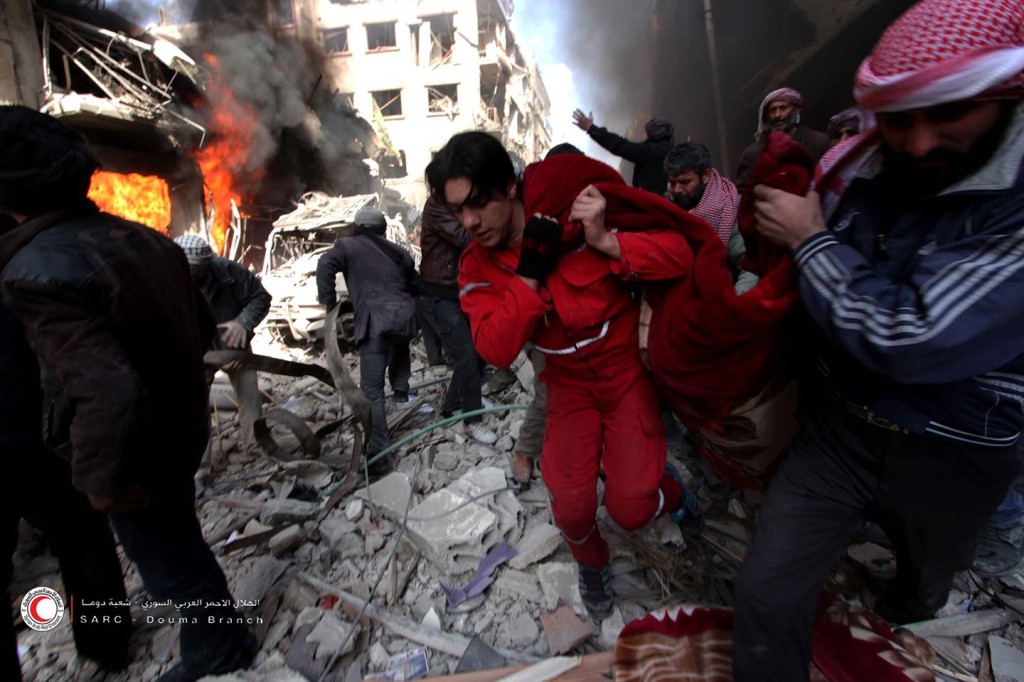 How to Make the Douma Massacres Disappear

In Douma in East Ghouta, northeast of Damascus, the assault by President Assad’s air force and his artillery has killed, wounded, and burnt alive thousands of residents since 2012.

To try and stop the mass killing, Jaish al-Islam launched two rocket attacks on Assad’s assets in the capital in the past two weeks, targeting military installations and security headquarters to show the regime that it is not safe even in areas that it still controls. Both attacks were announced days in advance. Civilians were warned not to approach regime facilities, especially military checkpoints and buildings, and asked to stay indoors in windowless rooms, cellars, and other shelters which could not be hit by Jaish al-Islam’s rockets.

The Assad regime, exploiting the pre-announced attacks, began shelling residential areas in the capital with mortars and artillery as soon as the first rockets were launched by Jaish al-Islam. Bombardment of rebel-held East Ghouta’s residential areas with rockets, long-range artillery, and bombs was escalated.

While scores of deaths in and near Douma went unnoticed, the regime put out a stream of propaganda and disinformation on the Damascus rockets, issuing unverified claims of civilian casualties caused by the “terrorists”. Little proof was provided but the mass media, unable to investigate, took the claims as truth — sometimes adding the label “according to [State news agency] SANA”.

I am not aware of a single journalist who bothered to investigate further. The rebels did not reach out, merely uploading a video and a few sentences in Arabic on Facebook and Twitter addressing the people of Damascus. So no one interrogated a regime which was causing all-too-evident deaths in Douma but pointing only to a supposed “terrorist” campaign inside Damascus. It was far easier just to put out headlines, replicating Assad propaganda, that fits a of evil extremists creating havoc — ignoring that the deadliest “extremist” forces have been those deployed by the regime.

I asked Jaish al-Islam spokesman Saleh if he was aware that even some pro-opposition Syrian expatriates were accusing the rebels of provoking increased regime attacks on the people of East Ghouta, especially Douma. He replied:

No. That’s baseless, and it is disregarding the regime’s modus operandi. The regime has never stopped its massacres, but it sometimes focuses on specific areas. These missiles launched on Douma would have been be launched on other cities if we hand’nt attacked the regime. So it is the same, but just the regime focus shifts from area to another. It is very strange to find people unaware of these facts after 4 years.

What these activists and the media missed, was that this is not a tit-for-tat “I shell your civilians, you shell mine” game, but a desperate attempt by rebels to defend the people of East Ghouta by scaring the regime away from further massacres. Assad and his cronies would only understand the threat if they were hurt in their strongholds. Jaish al-Islam tried to make this clear but, without an effective PR operation, they were not heard outside Syria. They were misunderstood, and blamed.

“You know, we need a lot of help in this field,” Mr Saleh added.

Hours after he said this to me, another 120 people were killed and hundreds wounded in Douma by regime airstrikes.