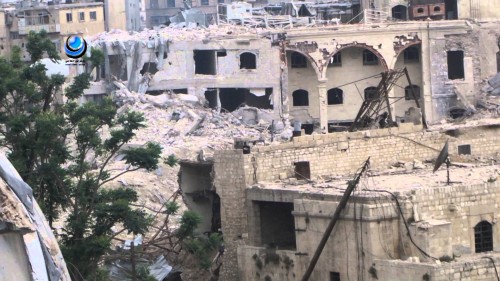 Insurgents struck again on Thursday in the heart of Aleppo, both hitting a military target and seizing headlines with the underground bombing of the Carlton Citadel Hotel.

The hotel, used by Syrian troops and shabiha and next to the 13th-century Citadel, was heavily damaged in the third attack on it in the last three months. EA sources claimed that more than 50 Syrian troops were killed.

The number of casualties in several other buildings which were also reportedly damaged is unknown. State news agency SANA only briefly mentioned the blast, without saying anything about killed or wounded or even the presence of the Syrian military.

The attack took attention from the insurgent evacuation of Homs and exposed a regime weakness amid its claims of victory against “terrorists”: this was the latest in a series of large bombings carried out using underground tunnels. The Citadel complex was hit in February, and other targets in Aleppo and Idlib Provinces have also been struck.

The explosion also pointed to continuing insurgent pressure on regime forces in their parts of the divided city. Since February, the opposition has been advancing from the northwest and trying to cut regime lines of supply to the south.

EA sources report that the last phase of the evacuation of insurgents from Homs is underway, with confirmation awaited that it has been completed.

There had been media chatter earlier today that the arrangements had been suspended because of problems with aid deliveries to the regime-held villages of Nubl and Zahra, north of Aleppo.

Sources report that insurgents have successfully attacked Hezbollah and Syrian forces in the Zahra section of northwest Aleppo, taking control of the main street and surroundings:

Opposition forces have advanced through Zahra and neighboring Layramoun in the last two months, putting pressure on regime forces inside Aleppo.

As part of the agreement for the evacuation of Homs by insurgents, regime forces who had been held prisoner are released in Latakia Province in western Syria:

Forty civilians, kidnapped and held for nine months by insurgents after an offensive in the province last August, were also freed. The whereabouts of another 55 are unknown.

The aid truck hit by #Syrian regime was carrying flour to bread bakeries in #Aleppo. #Syria

According to the latest reports, a second aid truck was hit by #Assad forces. The trucks were carrying pasta & flour pic.twitter.com/jHjPDUdUBk 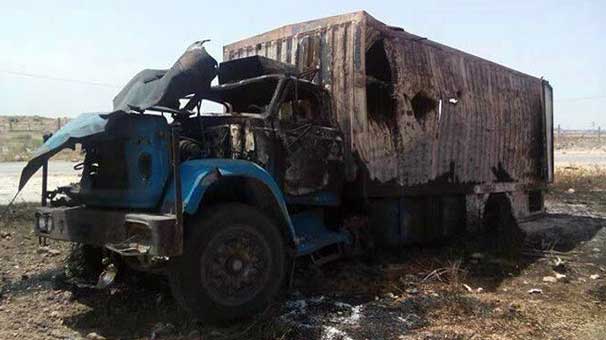 Kafranbel’s Friday Protest: “We Recommend That You Allow Assad to Use Iranian Nuclear Weapons”

A bitter message to the international community in the Friday protests in Kafranbel in northwest Syria:

A tribute to the uprising in Homs as the last insurgents leave the city: 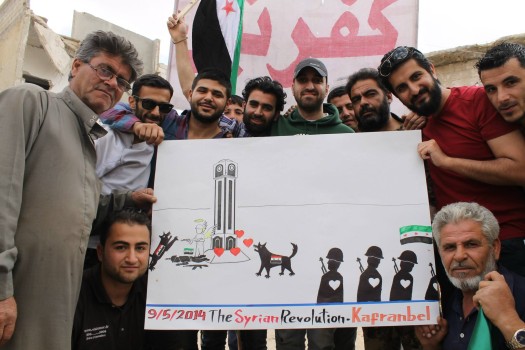 Has Regime Pressure Been Lifted on Mleha, Near Damascus?

Reports from both opposition and regime media indicate that the Syrian military has been checked in its attempts to take Mleha, a key town east of Damascus.

The opposition Shaam News Network claims that, having pushed regime forces out of Mleha after a Monday assault, insurgents have taken several positions used as launching points for the attack.

See Insurgents Push Regime Forces Out of Mleha, Near Damascus

State news agency SANA does not refer to regime losses, of course; however, its latest report on the area is limited to an “army unit killed a number of terrorists in al-Mleiha farms” with no reference to operations in the town.

Mleha is seen as the gateway for a regime attempt to take insurgent-held areas of East Ghouta, pushing the opposition out of its crescent around Damascus.