Syria Daily, May 8: Beyond The Evacuation of Homs 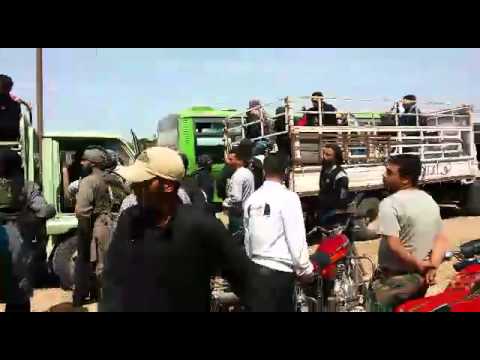 Western media will be dominated today by the evacuation of Homs, as the last insurgents began leaving Syria’s third-largest city after more than two years of resistance.

The first three buses in the Old City, the heart of the insurgent position, took 120 fighters and civilians. Other insurgents left on motorbikes, some chanting defiantly as they left.

See Videos: The Insurgents Leave Homs
Video Satire: The “Official Statement” on Insurgents in Homs — & How They Were Betrayed

Later phases of the evacuation, taking the fighters to villages north of Homs, are linked to the lifting of the opposition restrictions on supplies to Nubl and Zahraa — two regime-held pockets north of Aleppo.

The Islamic Front repeated assurances today that aid will be delivered, saying six trucks had gone into each of the two villages.

In addition, the two sides will exchange prisoners, including some Iranians held by the insurgents.

The Islamic Front handing over prisoners:

The agreement for evacuation was reached after the Syrian military tried for weeks to clear out insurgents from 13 districts with sustained bombardment — including barrel bombs — and ground offensives. It has prompted snap declarations in the media, as in the BBC’s lead report on its top radio program, that “Assad is winning” the 38-month conflict.

Such declarations often ignored the rationale of the insurgency for the evacuation, as well as other developments in Syria.

Most of Homs had been “lost” to the regime in early 2012, following a deadly bombardment that levelled areas such as Baba Amr. Another offensive in summer 2013 decimated sections such as Khalidiya. For many in the opposition, The holdout of the remaining insurgents continued to tie up regime men and resources while the frontline battles were elsewhere.

There has been some support for that argument as the insurgent advanced in the southwest and pressed regime forces in and near Aleppo, as well as continuing to hold much of northern and eastern Syria. Opposition fighters are also continuing to resist regime efforts to advance near Damascus, inflicting significant losses on Syrian forces trying to retake the Battalion 559 base in eastern Qalamoun on Wednesday.

Video: Regime Promotes Its Attack On Mleha, East of Damascus

A National Defense Forces film promoting the operations of militia near Mleha, east of Damascus:

The Syrian military has been trying for weeks to take the town, seen as the gateway to the East Ghouta areas occupied by insurgents. Regime forces were briefly in the center of Mleha on Monday, but were then pushed back and took heavy losses in an ambush.

See Insurgents Push Regime Forces Out of Mleha, Near Damascus

The United Nations’ Resident Co-ordinator reacts this morning to the sight of the evacuated sections of Homs:

A significant consequence of the Homs evacuation deal is the release of 40 civilians who were kidnapped by insurgents during an offensive last August in Latakia Province in Syria.

The fate of 55 other civilians reportedly held is unknown.

Eleven children and four women were brought from the east of the province and released at the checkpoint in Kefraya village on the outskirts of Latakia.

Al-Akhbar quotes the former captives as saying they were treated well, but notes stories of those who were killed by insurgents during the offensive.

Human Rights Watch subsequently denounced insurgent factions, notably the Islamic State of Iraq and as-Sham, for the killing of civilians, abuses, and abductions.

Insurgents have blown up a major hotel and and several buildings near the Aleppo Citadel, claiming they were used by the Syrian military.

Fighters detonated a bomb placed in a tunnel beneath the Carlton Citadel Hotel. Opposition activists said Syrian troops had been killed — EA sources put the number at more than 50.

The Islamist faction Jabhat al-Nusra has posted a video “confession” from Colonel Ahmed Nemmeh, the Free Syrian Army commander whom it detained in Daraa Province in southern Syria earlier this week.

Nemmeh, former head of the FSA’s Daraa Council, is to stand trial in an insurgent court on charges of treason.

In the video, Nemmeh said last May’s defeat in the battle for the strategic town of Khirbet Ghazaleh was deliberately arranged by the insurgency’s international supporters.

Insurgents were repelled from Khirbet Ghazaleh, on the Damascus-Daraa motorway, after 60 days of heavy fighting. They appeared to have secured a victory, then Nehmeh took charge of the battle and vital weapons shipments failed to arrive as some insurgent units pulled out. The remaining fighters were then defeated.

According Nehmeh’s confession, “the donor countries” contacted him and he enacted their orders to pull units out of Khirbet Ghazaleh. He said the reason was the fear of Jabhat al-Nusra’s increased influence in southern Syria.

Nemmeh, who defected from the Syrian Army in 2012, had been increasingly marginalized in operations although he maintained his title as head of the Daraa Military Council and still commanded fighters. He was not involved with the Military Operations Command (MOC) operations room in Jordan, with staff from Arab and Western intelligence agencies supporting Free Syrian Army operations. He was also largely bypassed in weapon flows which he had previously supervised.

Housing Issues Keep Residents Away from Damascus Suburb After “Reconciliation”

Syria Deeply offers a sobering perspective on life after “reconciliation” in the Damascus suburb of Barzeh.

In January, photos celebrated a ceasefire agreement between the Syrian military and insurgents, with the regime soon proclaiming an intense campaign to repair infrastructure and homes.

(Residents) found entire streets leveled. According to estimates by United Nations officials who visited Barzeh, it was one of the hardest hit in the Damascus area; the level of destruction to homes and commercial spaces here hit 75 to 85 percent in peripheral areas, and 100 percent along the front lines.

Abd al-Rahman al-Shami, a member of a local civilian council that has tasked itself with surveying the damage, says that four months after the signing of the cease-fire, nearly 300 families have returned – just one-third of Barzeh’s original 35,000 residents. He says the majority have not returned primarily because they cannot afford the cost of repairing their homes.

In short supply, construction supply prices in the suburbs have skyrocketed by about 400 percent over the past two years. The price of a 50 kilogram bag of cement in Barzeh now runs to 1,000 Syrian pounds, or $8. One cubic meter of sand has reached 4,000 pounds and the average price of window glass is approximately 1,300 pounds. The majority of the returnees are unemployed, and can’t afford to buy much outside food and other basic supplies.

The cost of restoration varies depending on the level of damage. While the cost of restoration for a partially damaged house might run 75,000 pounds, or $500, for broken windows, doors and ceiling repairs, it can reach as much as 400,000, or $2,600, to rebuild a home that has been demolished.

An Islamic State of Iraq and as-Sham fighter takes a break in Raqqa, the largest city outside regime control: 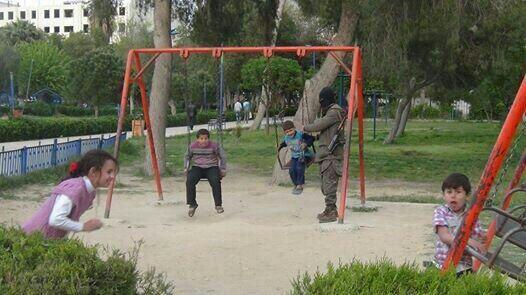 The Syrian ambassador to the United Nations, Bashar al-Jaafari, has said that some United Nations Security Council members are providing “terrorist groups” in Syria with chemical weapons.

Al-Jaafari did not identify the states. The three Council members who have provided aid to the opposition are the US, Britain, and France. Jordan, which hosts officials of those countries in a center supporting the insurgency, is also on the Council.

Al-Jaafari’s speech continued the regime campaign to shift blame for chemical weapons attacks to insurgents: “Syria has witnessed the use of chemical substances by the regionally-backed armed terrorist groups against civilians and military personnel several times”.

He called on the Council to “play its role to prevent the terrorist groups active in Syria from possessing weapons of mass destruction and to hold the countries which are supporting terrorism in Syria accountable as to actively contribute to the efforts exerted to maintain international peace and security”.

President Assad has promoted the regime strategy of local ceasefires near Damascus, meeting officials who have pursued the efforts.

Assad said the initiatives showed the regime’s belief that the crisis cannot be resolved by foreign sides; rather it can only result from the efforts of Syrians alone, because Syrians are the most capable of finding solutions to their problems”.

The military goal of the “reconciliation” efforts is to end insurgent control of areas near the capital. The approach, following many months of sieges, has succeeded in areas such as Barzeh and Moadmamiya; however, insurgents continue to hold suburbs and towns such as Jobar, Douma, and Mleha, which the regime has been attacking for weeks.

Shaam News Network reports that the Islamic State of Iraq and as-Sham has executed Muttaz Billah Ibrahim, its 21-year-old journalist in Aleppo Province.

Ibrahim had been detained for two months and tortured. ISIS never gave any reason for his detention, according to SNN.