Syria: Insurgents Push Regime Forces Out of Mleha, Near Damascus 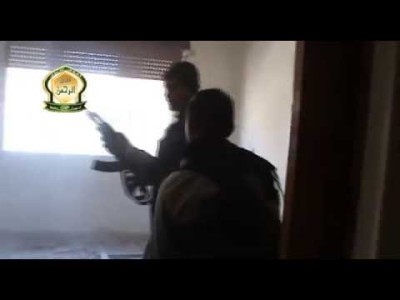 State news agency SANA appears to admit, by omission, that Syrian forces have not captured the town of Mleha, east of Damascus.

On Monday, State media had declared victory in the fight, but on Tuesday SANA limited its coverage to “(our) reporter said the army units killed a number of terrorists in al-Mleiha farms, including Mahmoud Halawa and Ayman al-Naqishbandi”.

Seizure of Mleha would be a key advance for Syrian forces who are trying to clear insurgents from the East Ghouta area near the capital.

However, Tahrir Souri reports this morning insurgents repelled regime attempts to break into the town, covered by 10 airstrikes.

Fighters from the Islamic Front, the Al-Rahman Squadron, and Jabhat Al-Nusra were involved in the defense. A source claimed 35 Syrian troops and militia were killed in an ambush.

Insurgent sources said regime forces had reached the central square in Mleha on Monday, but were driven out by Tuesday.

SANA also appeared to indirectly confirm reports by EA sources that the regime offensive east of Aleppo had been checked.

On Monday State media were claiming advances on the Sheikh Najjar industrial area — a success which would threaten the cut-off of opposition fighters in Aleppo — but yesterday SANA said only that “Army units proceeded with operations on al-Sheikh Najjar-al-Breij axis in Aleppo, chasing down fleeing terrorists and leaving a number of them dead and wounded”.