Iran Daily, May 9: Rallying Behind Rouhani on Nuclear Talks 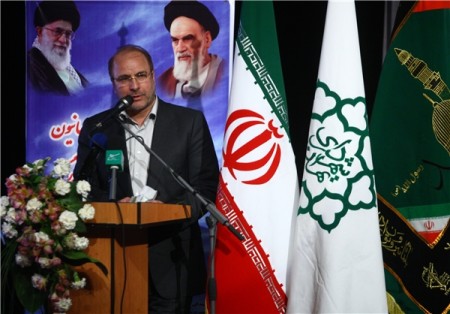 Facing an escalation in hardline pressure against Iran’s nuclear discussions with the 5+1 Powers, President Rouhani received a notable endorsement on Thursday.

Mohammad Baqer-Qalibaf (pictured) — Tehran Mayor, 2013 Presidential candidate, and former Revolutionary Guards commander — told Iran-Iraq War veterans that the talks were “a battle facing the nation and the Revolution” and urged critics not to weaken Iran’s negotiators.

He assured, “The Supreme Leader is employing ‘heroic flexibility’ and knows precisely what is going on in the nuclear talks.”

At the same time, the Tehran Mayor urged care in dealing with the US and its European partners, “The Supreme Leader has reminded us many times in the last government and in today’s government that we should not be naïve and imagine that if they speak with us and sound good that they have the interests of the Iranian nation and people in mind.”

The fourth round of talks on a comprehensive nuclear agreement between Iran and the 5+1 (US, Britain, China, Russia, France, and Germany) start on May 13 in Vienna.

Last weekend, the hardline Endurance Front, clerics, and former officials — including the head of the Atomic Energy Organization under President Ahmadinejad — held a “We Are Worried” rally to challenge the Government’s conduct of the talks.

Cleric Qassem Ravanbakhsh, the right-hand man of the Endurance Front’s leader Ayatollah Mesbah Yazdi, maintained the pressure on the Government with an editorial in Raja News:

(Let’s hope) the day doesn’t come where President Rouhani and (former President Mohammad) Khatami appear on television and admit their mistakes for putting their trust in the West, and blame (the West’s) unethical tactics for not being able to fulfill their pledges.

The Government and its allies responded with another reiteration of its allegation — first put out by Rouhani — that critics wanted the nuclear talks to fail so they could keep making profits from US-led sanctions.

Analyst Hassan Beheshtipour said, “It is in their interests to have additional sanctions placed on Iran….In such circumstances, they potentially can reap huge financial benefits in circumventing sanctions.”

Deputy Foreign Minister Abbas Araqchi, who leads Iran’s negotiators, told a British newspaper on Tuesday: “There are spoilers everywhere who don’t want an agreement, there are dark forces who don’t like this process….It is clear some people don’t want to resolve this issue in a peaceful and logical way.”

Tasnim Aslam, Pakistan’s Foreign Office spokesperson, has spoken positively of an upcoming visit to Iran by the Prime Minister of Pakistan, Nawaz Sharif.

Tasnim Aslam further commented on the visit saying, “We hope that this would be very constructive and would open up more avenues of cooperation between our two countries.”

The meetings, which will focus primarily on economic cooperation, may help improve diplomatic ties between the two countries, which have been strained in recent months by the cross-border activities of Sunni separatist group Jaish ul-Adl. A number of Iranian politicians criticised Pakistan for its response following the group’s kidnapping of four Iranian border guards in February.

Former President Mohammed Khatami has effectively chided the Rouhani Government for failing to fulfil a promise that it would ease Iran’s security environment.

Speaking to teachers, Khatami said he hoped for a change in atmosphere “so that the people could better serve the system and society, but it has not (happened)”.

Khatami also regretted that he could not say that Iran does not have political prisoners and prisoners of conscience.

The Tehran Prosecutor has ordered the closure of the news website DANA, following this week’s shutdown of the Qanoon newspaper.

Abbas Jafari Dowlatabadi told heads of courts that Dana has been banned because it reported that the head of the Fuel Distribution Administration had been released on $30 million bail, after he was arrested on charges of fraud and corruption.

Qanoon was closed after it quoted the DANA article.

The reformist newspaper Shargh said the ban was proposed by a committee soon after Facebook bought the messaging service for $19 billion in February.

“The issue of banning WhatsApp was raised. The president has ordered a halt on (blocking) the site,” Telecommunications Minister Mahmoud Vaezi said. “Until the time that we have a replacement for these sites, the government opposes filtering them.”

An official at the Ministry said the the ban was approved by the Committee for Determining Criminal Web Content.

Committee secretary Abdolsamad Khorramabadi said, “One of the reasons for approving the filtering of WhatsApp was the adaptation of this software by (Mark) Zuckerberg, the American Zionist manager of blocked site Facebook.”

More than 30 detainees — including high-profile journalists, lawyers, and activists — were attacked by guards and Intelligence Ministry staff after they protested aggressive inspections. The head of Iran’s Prison Service was replaced in the aftermath, and some MPs called for an enquiry. The Rouhani Government promised it would look into the matter.

However, Larijani maintained on Thursday:

Everyone saw the problems the foreigners started, even some within the country gave voice to them.

Our investigation was legal and correct, but (seditionists) were united by external and some internal media outlets who sought to destroy the judiciary.

We expect this from the foreign media outlets, but why have some domestic media outlets taken this step with them and shared their voice?