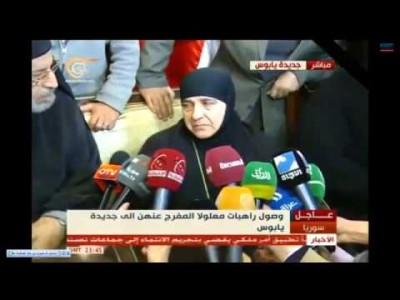 LATEST: Opposition Activists: Insurgents Hit Back at Regime in Zara, West of Homs

Thirteen nuns and three assistants, held by insurgents since fighting in the ancient Christian town of Maaloula in early December, have been released and are en route to Damascus.

The nuns were exchanged for 150 female prisoners, whose names have been confirmed by Qatari mediators. Activists claim some children were also freed.

Photo of three of the released women and one of the children:

Speaking upon their release, the women said the three months with the insurgents were not difficult, as the fighters from the Islamist faction Jabhat al-Nusra “dealt with us in a very good way” before an intermediary, pro-Assad businessman George Heswani, contacted the insurgents in January.

The regime said the nuns were abducted in December, as opposition fighters moved into Maaloula. Insurgents said the women were taken from Maaloula for their protection from the Syrian military’s shelling.

The nuns were kept in the nearby city of Yabroud. On video, they supported the story of “protection” and said they were being treated well by the opposition fighters. Subsequent reports indicated that the insurgents were seeking the freedom of women in Syrian prisons in return for the release of the nuns.

Critics of the insurgency countered that the statements were made under duress, as the women were not wearing their crosses; however, one of the nuns said on Sunday that this was their decision, as it was “not suitable to wear them in that place”.

Mediation continued through Haswani and the Qatari representatives, and the regime’s month-long offensive closing on Yabroud, with bombing of the city, increased the urgency of the situation.

A Lebanese security source said the nuns were transferred to the Lebanese town of Arsal last week. They crossed the border into Syria on Sunday night.

Opposition Activists: Insurgents Hit Back at Regime in Zara, West of Homs

Sources say that insurgents have hit back at Assad forces, two days after the Syrian regime moved into Zara, west of Homs.

The sources say the Islamic Front has killed about 40 regime fighters and has regained part of the village.

Activists have posted a video from a resident, saying it support claims of the killing of civilians by Syrian troops as they moved into Zara:

Lebanon’s Daily Star claims that the deaths of Hezbollah fighters has risen significantly in recent weeks, as the organization fights alongside President Assad’s forces in offensives in southern Syria.

The newspaper cites circumstantial evidence such as funerals in Lebanon and photos of the dead on Facebook. However, it cites a “source close to Hezbollah” that almost 500 members have been killed in the Syrian conflict.

The article notes that Hezbollah has announced the deaths of 15 fighters in March, and a website close to the organization said 40 fighters were killed in the past month in the attempt to capture Yabroud, northeast of Damascus.

Insurgents claim that scores of Hezbollah members have died as the Syrian military’s attempts to close on Yabroud have been repulsed.

Information Minister Omran al-Zoubi has told North Korea’s Ambassador in Damascus, “The steadfastness of Syria in the face of the conspiracy calls to mind the struggle of the Korean people for the liberation of their country.”

Al-Zoubi said the regime’s victory over insurgents “will be one for all free powers in the world”.

Damascus Insurgents: Leading Source for Western Media is Not Legitimate

The Revolutionary Command Council in Damascus has denounced the Syrian Observatory for Human Rights, whose claims are often circulated by mainstream media, as an illegitimate source.

The Command, accusing the British-based SOHR of “illegally working under an agenda” serving the Assad regime, said it “has no presence on the ground or contact with activists in the area”.

The “facts” of SOHR were actually rumors, said the Command. It claimed these drew the attention of humanitarian organizations “away from the crimes that happen in all Syrian cities”.

The Damascus insurgents cited the case of the Assad regime’s chemical weapons attacks in East Ghouta and West Ghouta, near the capital, on August 21. Opposition groups have documented the deaths of at least 900 civilians and said that more than 1,400 may have been killed; however, the SOHR said in the immediate aftermath of the attacks that only “tens” had died, eventually settling on the number of 183.

The Command also mentioned a regime attack in East Ghouta on a convoy of civilians, escorted by insurgents, fleeing besieged villages. The SOHR did not mention the civilians in its claims of the explosions, which killed up to 150 people.

The SOHR, which operates from Coventry in central England, is often cited as a “monitoring group” and sometimes called “pro-opposition” by leading media, such as Al Jazeera, Agence France Press, the Associated Press, and Reuters.