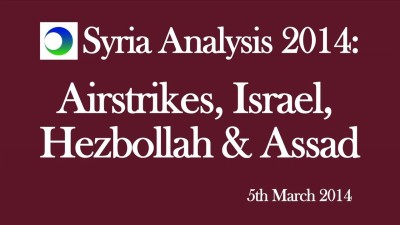 On February 24, Israel carried out the latest a series of airstrikes in and near Syria, hitting a Hezbollah position near the Syrian-Lebanese border.

Israeli warplanes have hit convoys and warehouses inside Syria, apparently in an attempt to disrupt supplies of rockets and missiles to Hezbollah.

What do the attacks mean politically, as Hezbollah increases its military support for the Assad regime but faces the challenge to its position — including Ministerial posts in the coalition Government — inside Lebanon?

Hezbollah has been drawn more and more into a Syrian conflict that it does not necessarily want….

Sheikh Nasrallah and his men are caught between the conflict and Israel, in a tense situation — politically, economically, and military — in Lebanon.

The longer they carry on fighting in Syria, the greater the risk they take.