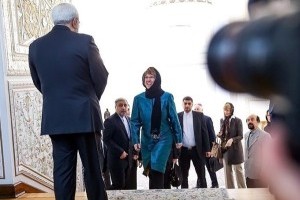 There is a marked shift in the line of Fars News, the outlet of the Revolutionary Guards, after Sunday’s nuclear talks in Tehran.

The European Union’s Catherine Ashton, the lead negotiator for the 5+1 Powers, discussed the state of negotiations with Foreign Minister Mohammad Javad Zarif and met President Rouhani.

Fars, which has featured a drumbeat of anti-US statements by the Iranian military, suspends them on Monday. Instead, it has five headline articles on the Ashton discussions, including “Ashton: Tehran Visit Heralds Start of Extensive Cooperation with Iran“, “Iranian President Hails Ashton’s Visit to Tehran as Crucially Important“, and “Senior MP: Ashton’s Visit to Improve Iran-EU Ties“.

No details were released by either side of Sunday’s talks, which follow the opening of discussions on a comprehensive nuclear deal last month.

The high-level negotiations will resume in Vienna next week.

A sour footnote to the visit of the European Union’s Catherine Ashton, the lead nuclear negotiator for the 5+1 Powers….

Iranian authorities have warned the Austrian Embassy over its hosting of a meeting between Ashton and Iranian human rights activists.

Those at the gathering included the mother of Iranian blogger Sattar Beheshti, killed in detention in November 2012.

“These actions will lead to an increased suspicion between our people and the West and it doesn’t help relations between Iran and Europe,” Foreign Ministry spokeswoman Marzieh Afkham said.

President Rouhani had said on Sunday that Ashton’s visit furthered relations between Iran and members of the EU.

More than 400 Iranian journalists have written an open letter to Culture Minister Ali Jannati, protesting a plan to require their licensing by the Culture Ministry.

The letter said the proposal, pushed by Deputy Minister for Press Affairs Hossein Entezami, “in various eras — from before the (1979) Revolution until today — has been pursued by those against freedom of speech”.

The plan commands journalists to periodically present their work to the Culture Ministry for evaluation of quality.

The Journalists Guild, which some reporters believe could be an alternative route for licensing, was closed under President Ahmadinejad.

Long prison sentences for Kurdish journalists and brothers Khosro and Massoud Kordpour have been confirmed.

Khosro Kordpour was sentenced to six years in prison and two years of exile for “collaboration in protest gatherings” and “propaganda against the regime.”

The Kordpour brothers, who work for the Mukrian News Agency, were arrested in March 2013.