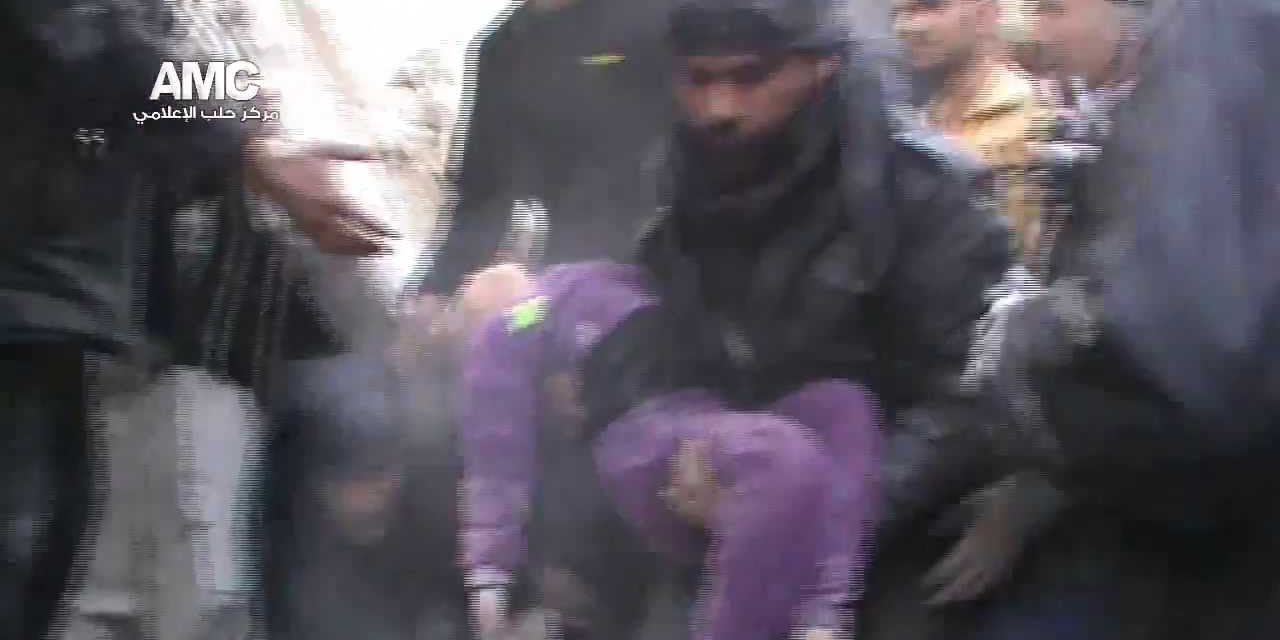 UPDATE: Sources report the Syrian military has dropped more than 30 barrel bombs around Aleppo Central Prison on Friday, trying to dislodge insurgents who moved into the complex yesterday.

For the sixth day in a row, Syria’s headline was regime bombing, especially of insurgent-held areas of Aleppo and the Damascus suburb of Darayya.

Dozens of bombs, including barrel bombs, were dropped on sections of Aleppo such as Hanano. Airstrikes, as well as tank and artillery attacks, were also launched on the Aleppo Central Prison after insurgents occupied part of it and released hundreds of inmates.

Another 22 barrel bombs were used on the strategic town of Darayya, between southern Damascus and Daraa Province in southern Syria, bringing the total to almost 250 since the start of the year.

Rescue of a child after one of the attacks on Aleppo:

The Local Coordination said 82 people were killed across Syria on Thursday, including 10 women and 15 children. Of the deaths, 45 were in Aleppo Province and 22 in Damascus and its suburbs.

The regime has been unable to follow up the attacks with ground offensives to hold territory. Instead, the development on Thursday was the insurgent assault on the Aleppo Central Prison. By the end of Thursday, opposition fighters had a path into part of the complex and were trying to holding it against the Syrian military’s counter-attacks.

The moment of explosion of an insurgent vehicle bomb:

Footage of the prison:

Jabhat al-Nusra Criticize ISIS Attacks Against It in Eastern Syria

Jabhat al-Nusra has issued a long statement complaining about attacks on its facilities by the Islamic State of Iraq and as-Sham.

The Islamist faction said ISIS has interfered with its financial resources in Deir Ez Zor Province in eastern Syria, saying the Iraqi-led group has refused to heal tensions and stop hostilities.

Amid clashes with insurgents, ISIS has taken a gas plant, several grain stores, and factories in the areas.

Regime Shells In Homs, Even as Evacuation Starts

Even as it began the evacuation of a group of 83 civilians from the Old City of Homs, the Assad regime was attacking the nearby district of al-Waer, home to many displaced Syrians:

State news agency SANA says a first group of 83 civilians has been moved from the besieged Old City in Homs.

The report said the group was allowed into the Deek al-Jinn area.

“The United Nations can confirm that 83 people were evacuated from Old Homs City today,” said United Nations spokesman Farhan Haq. “The people — women, children and the elderly — were then delivered to places of their choice, escorted by United Nations and Syrian Arab Red Crescent staff.”

They were living on leaves and grass and olives and whatever they could find….

There are signs of malnutrition, for some of them it is very obvious. Some said they have not eaten bread for five months.

Homs Governor Talal al-Barazi said earlier on Friday that about 200 civilians will be evacuated in the first wave.

United Nations envoy Lakhdar Brahimi said 13 days ago, at the Geneva II conference, that he hoped for agreement on evacuation and aid into the Old City. However, opposition and local activists expressed concern that the evacuation was a regime plan to isolate men in the Old City — leaving them vulnerable to detention and attack — and Damascus refused to agree to the aid arrangements in talks with the UN.

The Homs Governor said that aid would begin moving into the Old City on Saturday.

The Russian Foreign Ministry indicated that the intervention of its Embassy in Damascus had been instrumental in getting agreement to a plan. It declared:

The result of difficult, multi-day negotiations…is an agreement to cease fire for three days and provide humanitarian support to the residents of the Old City of Homs….

It is foreseen that all children, women, men under age 55, as well as wounded people, can leave the combat zone without obstacle.

Deputy Foreign Minister Gennady Gatilov said the agreement justified Russia’s opposition to any UN measure condemning the Assad regime’s blocking of aid to areas under siege: “This confirms that the humanitarian problems of the Syrian population can be solved through concrete steps, not the adoption by the U.N. Security Council of politicised resolutions.”

Muslim is a seasoned fighter, having fought in Chechnya alongside Arab foreign fighters and has contacts with Middle Eastern donors. Formerly the leader of the Jundu Sham group, in October he joined forces with Sayfullakh Shishani and became the leader of another, larger independent Chechen faction, Kataiba Khilafatul’ Islamiya.

A photograph of Muslim Abu Walid Shishani enjoying some quiet time with a magazine: 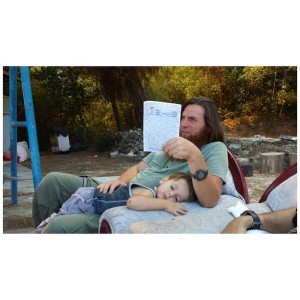 Russian-language pro-jihad social media accounts are reporting that the Amir of the Uzbek foreign fighter faction Sabir, Abu Abdullah al-Tashqandi, has been killed in the storming of Aleppo Central Prison. He was likely fighting alongside Jabhat al-Nusra.

Sabir fought alongside the predominantly Chechen and North Caucasian group Jaish al-Muhajireen wal Ansar last April in the storming of the airport in Aleppo.

There are relatively few Uzbek fighters in Syria, however there have been reports of North Caucasian recruiters targeting ethnic Uzbeks in Kyrgyzstan and sending them to Syria via Turkey. Apart from these, Uzbeks from the Islamic Movement of Uzbekistan (IMU) are also fighting in Syria. Most appear to be fighting with Jabhat al-Nusra.

Assad Regime: We Will Attend Next Round of Geneva II Talks

Deputy Foreign Minister Feisal Mikdad said on Friday that the Assad regime has decided to participate in the next round of the Geneva II talks.

The Assad delegation said at the adjournment of discussions last week that it would have to consult Damascus over the proposed second round, scheduled for February 10 by United Nations envoy Lakhdar Brahimi.

Mikdad told State news agency SANA, “The delegation underlines the continuation of efforts made at the first round of the conference with the emphasis on discussing Geneva Communique articles sequentially.”

Pro-jihadi sites report that a suicide bombing on the Aleppo Central Prison on Thursday was carried out by a British suicide bomber, Suleiman al-Britani.

Click to see a claimed image of the Vehicle Borne Improvised Explosive Device (VBIED) used in the attack.

The Foreign Ministry has rejected a United Nations report which claimed the detention and abuse of thousands of children by the Assad regime.

“Syria has cooperated with the representative of UN secretary General, with a true intention, to help the children in Syria restore their innocent life,” the Ministry said in a statement.

It criticized the UN Secretary-General’s office for “defamation, incredibility, and non-transparency”.

The report, presented to the Security Council last week, estimated that at least 10,000 children have been killed in the Syrian conflict since March 2011. It said children as young as 11 were held in regime detention centers with adults:

Ill treatment and acts tantamount to torture reportedly included beatings with metal cables, whips and wooden and metal batons; electric shocks, including to the genitals; the ripping out of fingernails and toenails; sexual violence, including rape or threats of rape; mock executions; cigarette burns; sleep deprivation; solitary confinement; and exposure to the torture of relatives.

The report also criticized insurgents’ use of children as fighters and cited two cases of executions of juveniles.