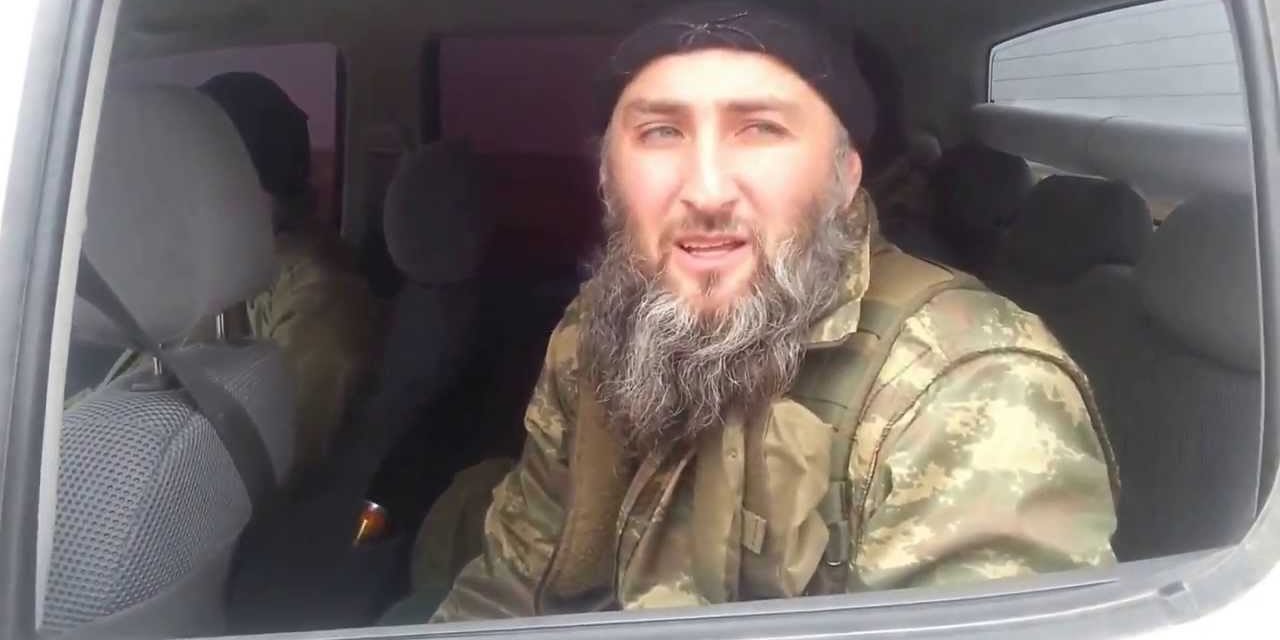 Abu Jihad Shishani, Umar Shishani’s second-in-command in the Islamic State of Iraq and ash-Sham, has made several long audio addresses explaining ISIS’s position and events regarding the conflict between the faction and insurgents.

Abu Jihad first explains why the Islamic State of Iraq expanded itself to include Syria, then goes on to blame the Free Syrian Army, the Islamic Front and foreign intelligence services for the fighting between ISIS and insurgent groups.

We have translated the first part of the very lengthy address below, and will publish the second part soon. The original in Russian can be heard here:

In this address, with the permission of Allah, we will attempt to explain to our sincere brothers and sisters who are suffering and making du’a for us, the true state regarding what is happening here in the land of Sham.

Everything I say in this appeal that is truth, is from Allah, the errors are from Satan or from myself.

Initially we did not think to make addresses or to answer the slander that the hypocrites have leveled at us, leaving it to Allah…

But after we repeated instruction from sheikhs from different places and being led by the Quran and the Sunnah on the need to respond to slander, we decided to make this appeal .

Most likely it will cause the criticism from those who have diseased hearts. But Alhamdulillah, we are not afraid of censure condemning us.

In Sharia, there are two kinds of establishment of the state:

1. By the selection of a Caliph, Imam and an Amir (scholars, emirs , elders and other influential people) – this is the right way.
2. Power takeover. This is banned. But if someone from the Muslim community seized power and established his authority it becomes obligatory to obey him.

What kind of establishment was ISIS’s?

In Iraq they gathered, among them were the brothers of Al Qaeda, and they declared a state. It was recognized and praised by the majority of amirs, and scholars of jihad. According to Ayman Al-Zawahiri, Sheikh Osama was one of them.

Is not mandatory that all the nobles of the Ummah or city gather to declare the Imam.

(Here Abu Jihad gives some lengthy examples from the Quran.)

As we can see, the declaration of the Islamic State in Iraq was legal under Sharia, and was recognized by known emirs and sheikhs of jihad.

As for the announcement of ISIS in Sham, it was done so that the fruits of jihad and works of the Mujahideen martyrs could not be stolen by any Democrats and other infidel scum. This fact we have often observed on other fronts of jihad – while the Mujahideen fought with the infidels, apostates and hypocrites in the liberated areas behind their backs, the infidels built their regimes. So time after time, our Ummah was bitten from the same hole. And the Prophet said: “The believer is not bitten from the same hole twice.”

Within two years from the beginning of Jihad in Syria, anarchy reigned in the liberated territories. Gangs ruled, who were involved in looting , murders, raping women they liked (they abducted them or their husbands under torture and forced them to admit to the camera that they are employees of the Assad regime, that they gave away Free Syrian Army bases, were spying, etc . etc., and then, threatening them with execution, they forced them to do what they want). These facts are known to all brother Mujahideen who are here. None of the so-called Islamic Jamaats thought to change anything or install Sharia. Moreover, they were even afraid to say that they generally have the intention of ever installing it. They attributed this to the fact that now the West is helping them, and in this case, would stop supporting them, that this is out of wisdom and cunning in jihad .

In other troubles, the people had such problems as hunger, unemployment, disruption of electricity and water supply, the streets were not cleared of garbage, the onset of illness, medical care was very poor, in a word, chaos began. It got to the point that people on the streets began to say: “Come to establish any power, even if it is the Devil himself”.

At this time in Turkey was formed the so-called interim government who were willing to go into Syria and establish democracy in the liberated areas. Already they had made some steps:

The army infiltrated this government, led by Salim Idris.

And they were really different from all other groups of the FSA. They had a single form, a stable salary, base, ranks of officers, i.e. all like a real state.

In such circumstances, it was decided to expand the Islamic State and to include in it the a land of Sham.

And despite the fact that it is not mandatory under the Sharia, to avoid disputes and fitnah in Sham the schokars were mainly Syrians. At least half of the Mujahideen in ISIS in Syria are Ansars. So that’s the problem that everyone saw.

Why was there no problems in establishing the Emirate of Afghanistan? Although the Taliban waged a bloody war on dissenters.

So what has changed now? Or is it a double standard? Think for yourself!

At that time, the Mujahideen of ISIS were mostly in operations and fronts against the regime of Bashar. Personally me and Umar were at Deir al- Zor, which is more than three hundred miles from Aleppo, our bases and homes.

And when we are already prepared and had all gathered to attack (the assault was to be the next day), the news comes to us that the FSA and Islamic Front, united, treacherously attacked our base, in which there was no one except the rib at and our homes, in which there was no one besides women and children . Unsuspecting brothers were mercilessly shot at the posts, they attacked wounded and helpless brothers in hospitals and on the bases, captured our brothers and sisters, some of them they defiled.

When I heard some brothers and sheikhs saying that this is speculation, etc, I hesitated and began to elaborate. And found nine confirmed cases. We know who it is, whose wife it is and where they are from. And those who say that this is rumor, saying that it was FSA commanders, they asked them, but they flatly refused, etc. It would be foolish if they admitted it. However, some of the group “Zinki” recognized that there were such cases, but flatly denied any involvement in this, saying that it was robbers etc.

And after all these atrocities and betrayal ISIS made ​​an appeal, calling the attackers to leave it alone for 24 hours, otherwise it would have to leave all of its operations and fronts and go to protect their brothers and sisters. When the term ended and we did not receive any response, but on the contrary, seeing their impunity, they attacked more brothers. Then we were given the order to run to aid our brothers and sisters.

Already on the road we encountered treachery and betrayal at the posts that were blocked by Ahrar al-Sham, thereby stopping us and helping these bastards. And then we had to storm these obstacles. When their posts and bases began to fall, they immediately sent us news, that they want negotiations. Then we replied to them to send negotiators, but they said that they are afraid to go to us and want us to come to them. When we went with Umar to them to negotiate, then fell into an ambush in which I and another brother were injured. There were no martyrs thank Allah. Despite this, when the next day their Emir Abu Khalid Suri came and asked for a truce, Umar said yes.

But we had not driven a few tens of kilometers, when we learned that Ahrar al-Sham with the FSA treacherously attacked the base of our brothers in Al Bab, Manbij and Jarabalus, killing a large number of brothers. And again, our brothers went to the aid of the oppressed brothers and sisters in these cities.

Roughly in the same position were all the columns of ISIS who had gone to help with operations and the front. All of them met with treacherous positions that prevented them from reaching the brothers and our brothers had to fight them all to pass.

And at this time, exploiting the vulnerability of our bases and houses and the fact that help could not come quickly, the treacherous alliance called Jaish Mujahireen, which was formed the day before the attack on us, together with the IF captured our bases and cities, where the laws of Sharia were operating. Such as the training camp-base Sheikh Suleiman, where they were mostly new, untrained brothers, most of whom had no weapons at all, while the minority who were with arms, ammunition was only half a round.

Or ad-Dana – the city in where Sharia was enacted, and there was a small number of brothers, designed to deal with order within the city, but not the brutal attack outside. And, accordingly, because of this they had no heavy weapons.

But those bastards attacked the town with tanks, artillery and anti-aircraft installations. Firing all weapons at the entire city, not just the position of the brothers, because they were afraid to go into the city. So there were casualties among the civilian population. And to avoid large losses among civilians, the brothers decided to leave the city .

As locals said later, they (the FSA) behaved exactly like the Alawite army robbing and destroying everything in its path. Thus, they took cars on the street who did not belong to ISIS, and was the property of civilians. So they behave in other places they had captured.

And after all this mayhem, Sheikh Abu Bakr Baghdadi made an appeal and urged his mujahideen to exercise restraint and not to fight with those who quit fighting with us, but only respond to those who attack first.

Besides all this, Abu Muhammad Adnan made approximately the same appeal. So ISIS thrice called to stop the bloodshed. But some people and sheikhs continue to accuse us of not wanting to stop, as if they were small children and do not see that they attacked us first and they should be encouraged to stop. But still they make appeals to us.

So where is the wisdom?

So the other day, they once again attacked the brothers, after a non-aggression pact. They make an agreement and then break it themselves. So if the advisers really want to stop the bloodshed, let them give instructions to the other side as well, and not repeat the same allegations, which we will discuss later.

We are accused of takfir, but still no one can give us evidence that we committed takfir against some of those groups (except those who openly state that they want democracy , etc…. All these rumors are the fruits of the dirty machinations of foreign intelligence services and their hangers-on, the court scholars and other hypocrites.

I think it’s clear to even a child who is oppressing who here.