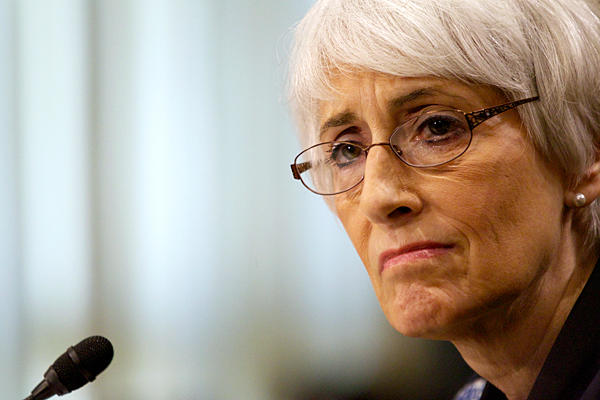 LATEST: US Lifts Sanctions Against IRIB for Six Months

More than 200 of Iran’s 290 MPs have urged the Rouhani Government to give “a decisive and revolutionary” answer to statements by the lead US nuclear negotiator, Undersecretary of State Wendy Sherman (pictured):

The insults of this American official precisely shows the arrogant and satanic nature of the world-eating America that has been repeated by America’s arrogant officials in recent weeks.

Sherman told the Senate Foreign Relations Committee on Tuesday that the six-month interim nuclear agreement, implemented from January 20, was “not perfect” but was a “first step” to a final resolution: “This does freeze and roll back their program in significant ways and give us time on the clock to in fact negotiate that comprehensive agreement.”

Foreign Minister Mohammad Javad Zarif said the next day that Sherman should “review the realities (of the nuclear situation) even for internal use”, referring to the Administration’s effort to stave off anti-deal members of Congress.

For more than two weeks, Iranian MPs, clerics, and officials have pressed the US over a remark by Secretary of State John Kerry that “military options were still on the table” if Iran did not adhere to the interim deal.

On Thursday, Foreign Ministry spokeswoman Marzieh Afkham referred again to Kerry’s comment and said, “The US is trying to impose a new negative atmosphere on the talks,”

Talks on a comprehensive agreement between Iran and the 5+1 Powers (US, Britain, Germany, France, China, and Russia) begin February 18 in Vienna.

US Lifts Sanctions Against IRIB for Six Months

The United States has temporarily waived sanctions against state broadcaster IRIB as part of a confidence-building measure between Washington and Tehran.

The waiver will last six months and comes into force after the Obama administration levied sanctions on IRIB last year, charging that the state-run broadcaster was blocking foreign channels that the government found objectionable and citing human rights groups who say the broadcaster distorted and falsified reports.

The 180-day broadcasting waiver will allow non-U.S. companies to provide the Iranian broadcaster with satellite services without being exposed to American penalties.

Iran’s State grains buyer GTC has purchased about 400,000 tonnes of wheat from Russia and the European Union, including Germany, according to European traders.

The wheat is for shipment between March and May, traders said.

Iran is not barred from buying food under Western sanctions, but European Union and US financial measures have made trade more difficult with barriers to financial transactions and shipping.

Nineteen MPs have responded to President Rouhani’s labelling of critics of the interim nuclear deal as “illiterates” by asking the head of state broadcaster IRIB to hold a debate between advocates and critics of the accord on national television.

On Wednesday evening tensions arose between Rouhani and the head of the IRIB as the president’s live interview was delayed by more than an hour, which was reportedly due to an objection by Rouhani’s office to the presence of a “hardline” journalist.

Vice Chairman of the Supervisory Council on IRIB Performance, Ramezanali Shojaei Kiasari, also announced that the council will review the “independence of national media in choosing the anchor of programs where branch heads are present.”

“US Attack on Iran Will Mean Israel’s Destruction”

If the Global Arrogance begins a war against the Islamic Republic of Iran, Israel’s destruction will ensue.