Syria Daily, Jan 3: Another Insurgent Victory — Is Qusayr Next? 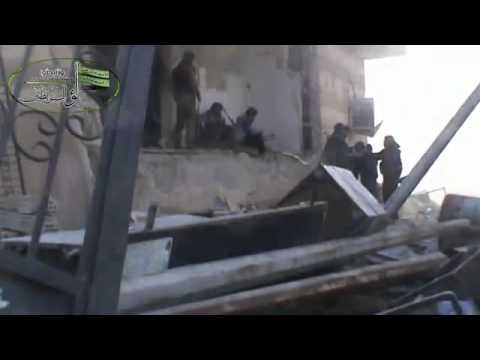 For the second time in two weeks, insurgents have taken a former hospital converted into a barracks for Syria’s military.

Opposition fighters moved into the complex in Jassim in Daraa Province in southern Syria on Thursday, following a suicide truck bomb.

The same pattern of attack was used in December to claim the Kindi barracks in Aleppo.

Footage from Jassim showed insurgents moving the courtyard of the former hospital after a Jabhat al Nusra member had dented regime defenses with the suicide bomb.

Insurgents fighting on the perimeter of the complex:

Insurgents have been trying to take territory in Daraa Province, between Daraa city on the Jordanian border and towns to the north along a key highway. Jassim is to the north of Nawa, which has been contested between the opposition and Syrian forces for months.

The hospital is just to the north of the town:

Even more dramatic news may be on the way. Insurgents appear to be moving on Qusayr, the town on the Lebanese border captured by the regime in a high-profile operation in June.

At the time, some observers claimed that Qusayr could be a turning point in the conflict, with the regime taking full control of cities such as Homs and Aleppo.

A self-imposed media blackout has limited news of the insurgent operations this week; however, reports of clashes — including from a Lebanese security source — circulated on Thursday. State news media reinforced this with claims that the Syrian army had wiped out “terrorists” infiltrating from Lebanon.

Insurgents Blow Up Pipelines Near Lebanon Border & Close to Damascus

Insurgents blew up the Homs-to-Tartous oil pipeline on Friday night.

The explosion was near the town of Tal Kalakh, close to the Lebanese border.

The minister said the blast was in the Al-Baytariya region, south of the capital.

We confirm that 5 #MSF colleagues taken allegedly for questioning in #Syria. Won't be saying anymore right now, to protect their safety.

The solidarity hunger strikes are organized via this Facebook page.

Qusai Zakarya is a 28-year-old Palestinian-Syrian who serves on the civilian Local Council of Moadamiya in West Ghouta, one of the towns hit by the August 21 chemical weapons strikes. Qusai is also a citizen journalist who has emerged as a prominent reporter on the situation in the Damascus suburbs.

Moadamiya has been under a total regime siege for over 365 days, with the Assad regime refusing to allow aid shipments. Several people have died of malnutrition related diseases.

Zakarya declared a hunger strike beginning on November 26, until the siege against the civilians of Moadamiya is lifted. He grew too sick to continue, so others have decided to keep up with the protest.

Sources have said that about 500 tons of chemicals used for nerve agents are still in 12 regime bases around the country, three days after they were due to be loaded onto ships for transport and destruction.

Some of the materials have been packed into US-provided drums, but none of them have been loaded, a diplomat said.

Norwegian and Danish freighters were supposed to move the stocks by December 31 to a US vessel which would then destroy them. However, the ships have returned to the Cypriot port of Limassol.

The Assad government has told the Organization for the Prohibition of Chemical Weapons that it will take at least 18 days to carry out the overland transport to Latakia.

The US ship, the Cape Ray, has yet to leave its port in Norfolk, Virginia on the 15-day voyage to an Italian port where destruction of the chemicals is to be carried out.

A new banner by activists in Kafranbel, Idlib Province, portrays the Islamic State of Iraq and ash-Sham as alien invaders. Civilians and insurgents in Syria have criticized ISIS, which is comprised of mainly foreign fighters, for having little connection with the domestic insurgency against the Assad regime. 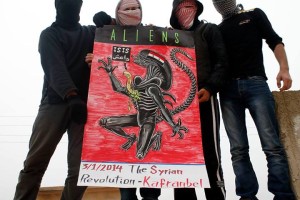