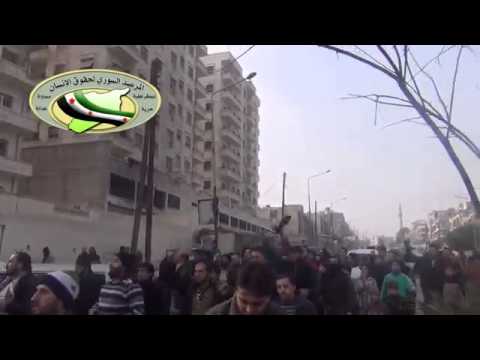 Activists report that insurgents have rallied after attacks by the Islamic State of Iraq and as-Sham on them across Aleppo Province on Friday.

The activists claim ISIS shelled Atareb, causing civilian casualties, and challenged Free Syrian Army and Jabhat al-Nusra units. There have also been clashes in Hazano and in Aleppo city.

Dozens of casualties have been reported by a source.

The Islamic Front, the leading bloc in the insurgency has issued a demand for ISIS’s withdrawal from Atareb:

The demand is made on Al Jazeera this evening:

In Maarat al Nu’man in Idlib Province, ISIS fighters were arrested without clashes.

There were casualties elsewhere, with many ISIS arrested in Idlib and Aleppo Provinces, probably to be seen in Sharia courts.

Only light clashes in Aleppo city, as rebels are awaiting a major regime offensive.

The opposition Idlib News Network, in a lengthy account, says trouble began on Thursdayn when ISIS tried to impose its control of the police station and the court. Tensions had been heightened by alleged kidnapping and killing of insurgents by ISIS.

ISIS launched operations on Thursday night in an attempt to take over the town, according to the activists.

Meanwhile, there were anti-ISIS demonstrations throughout Syria on Friday, with anger over detentions and abuses carried out by the group. The day was named “Friday of the Martyr Abu Rayyan”, the pseudonym of Dr Hussein al-Suleiman, who was tortured and killed by ISIS last month.

During Friday, insurgents countered with arrests of ISIS fighters, including in Kafranbel and Maarat al-Nu’man in Idlib Province. Sources claim that the number of ISIS prisoners is likely in the hundreds, with reliable accounts of at least 100.

Chants against both ISIS and the Assad regime in Aleppo: