From Libya to Syria: The “Al Qa’eda Myth” & The New York Times 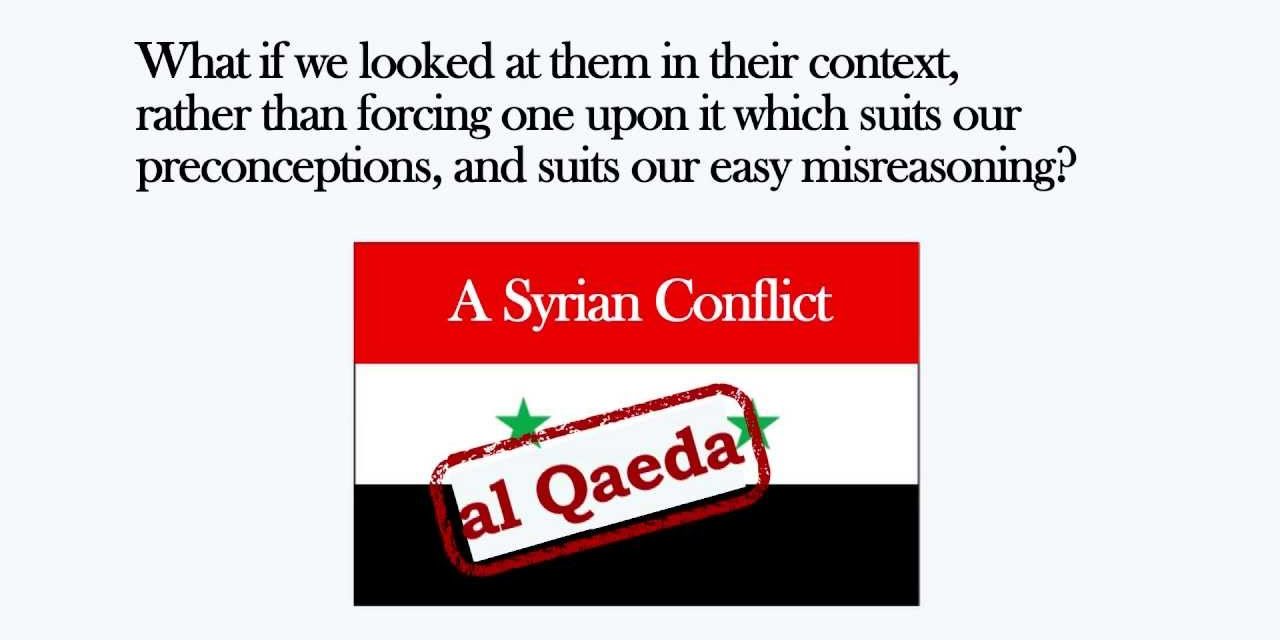 On Monday, the Editorial Board of The New York Times defended the newspaper’s months-long investigation of the September 2012 attack on the US Consulate in Benghazi in Libya, which killed Ambassador Christopher Stevens and three other Americans:

The report…turned up no evidence that Al Qaeda or another international terrorist group had any role in the assault, as Republicans have insisted without proof for more than a year. The report concluded that the attack was led by fighters who had benefited directly from NATO’s air power and other support during the uprising against Col. Muammar el-Qaddafi and that it was fueled, in large part, by anger at an American-made video denigrating Islam.

The editors said that criticism of the investigation was Republican “conspiracy-mongering” which “abandoned common sense and good judgment”. However, their important point went beyond any partisan politics:

Americans are often careless with the term “Al Qaeda”, which strictly speaking means the core extremist group, founded by Osama bin Laden, that is based in Pakistan and bent on global jihad.

Republicans, Democrats and others often conflate purely local extremist groups, or regional affiliates, with Al Qaeda’s international network. That prevents understanding the motivations of each group, making each seem like a direct, immediate threat to the United States and thus confusing decision-making.

Absolutely. But how about taking this analysis beyond Libya?

In the early days of EA, we questioned the over-use of “Al Qa’eda” to push back questions about the escalation of US military intervention in Afghanistan and Pakistan. We have cautioned about the “Al Qa’eda” obscuring the situation in Yemen, with US drone strikes feeding hostility rather than “winning” against terrorists. We have asked for a more considered understanding of insurgency in North Africa, including Algeria and Mali as well as Libya.

And we have argued against the reduction of the Syrian conflict to Assad v. “Al Qa’eda”.

Reading al-Joulani’s statement “from the ground up” — rather than imposing a simplistic “Jabhat al-Nusra are al-Qaeda” label from above — allows us to take…nuances into account when assessing the threat this group could pose both locally and in the wider region.

That did little to check the adoption of “Al Qa’eda-linked” as short-hand for Jabhat al-Nusra, and the media’s rising attention to the role of the Islamic State and as-Sham in the conflict further embedded the term.

In September, we tried to make the point in a Video Analysis:

But detailed understanding of local complexities does not make for an easy, reader-grabbing headline. And conversely, that easy, reader-grabbing “Al Qa’eda” label can perversely compensate for the difficulties — given issues of resources and the challenges of reporting from the ground in Syria — in getting detailed information and analysis.

So this week, a high-profile article by Sarah Burke in the New York Review of Books about the Islamic State of Iraq and as-Sham is given the headline, “How al-Qaeda Changed the Syrian War“, with Burke reaching a conclusion which is more about “us” rather than Syria:

While Syrians continue to suffer, sandwiched between a brutal dictatorship and extremist groups, Arab and European jihadists are being indoctrinated and trained in the world’s most active battle zone — experience they may someday bring home.

In Politico, Michael Weiss diverts from a critique of the complications of US foreign policy and Syria’s crisis with the tangential scare line, “It did not take long for al Qaeda to smell an opportunity.”

And this morning, The New York Times — the same paper that warned against “conflation” with the over-use of “Al Qa’eda” — posts this headline about fighting in western Iraq: “Parts of 2 Key Iraqi Cities Fall to Qaeda Group Active in Syria“.

None of this is to white-wash the serious issues over the insurgency and the Syrian conflict. Opposition forces have fractured and fought among themselves in a “patchwork” insurgency. The Islamic State of Iraq and as-Sham, as well as lesser-known groups such as the mainly-Chechen Jaish al-Muhajireen wal Ansar, has carried out detentions, kidnappings, and killings of civilians, activists, and members of other factions.

Little if any of this, however, is caused by the direction of an Al Qa’eda Central. Indeed, what is far more marked is the lack of any agreement among insurgent groups to act on behalf of that movement — witness the serious split between ISIS and Jabhat al-Nusra last spring — even if some share some of the ideological views of Al Qa’eda’s leadership almost 2000 miles removed in Pakistan.