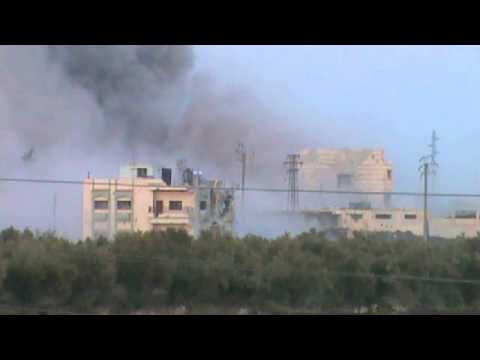 LATEST: Video: Aftermath of Airstrike on Sakhour Section of Aleppo

The Local Coordination Committees claim that 112 people died across Syria on Wednesday.

In Aleppo Province, which has endured an escalated campaign of regime bombing since December 14, there were 44 deaths. In Damascus and its suburbs, 32 people were killed, while 17 were slain in Daraa Province.

The Violations Documentation Center has documented the deaths of 83,278 people since the conflict began in March 2011. Of the dead, 61,628 were civilians.

On the battlefield, the most dramatic claimed image on Wednesday was an insurgent suicide bomb against a hospital-turned-barracks in Jassim in Daraa Province in southern Syria.

Claimed footage of opposition fighters inside a courtyard of the barracks:

Insurgents attacking and moving near the barracks:

Insurgents cheer as the vehicle hits the barracks:

Claimed video of the Jabhat al-Nusra suicide bomber, Ibrahim al-Arifi, singing a nasheed before the operation:

Fighting has surged in the area in the past week, with the Syrian military using barrel bombs amid its airstrikes.

A mosque damage by a regime strike:

Video: Aftermath of Airstrike on Sakhour Section of Aleppo

Claimed footage of another barrel bomb dropped on the Damascus suburb of Darayya, amid an escalation in regime bombardment this week:

A Lebanese security source has said that Syrian insurgents are advancing from a range of barren hills toward the Syrian towns of Jousieh and Qusayr, near Lebanon’s northeastern border.

The report matches that of EA sources who have spoken in the last 48 hours of insurgent advances.

President Assad’s forces, supported by Hezbollah, claimed a highly-publicized victory in June when they took Qusayr after weeks of attacks.

The Lebanese Army deployed heavily along the border on Thursday, the source said.

The Syrian military has carried out a series of airstrikes on the border this week, striking inside Lebanon near the town of Arsal on at least two occasions. One woman was killed and at least 10 people wounded, three critically.

The opposition Syrian National Coalition has condemned the killing of Dr. Hussein al-Suleiman, also known as Abu Rayyan, by the Islamic State in Iraq and al-Sham in Tel Abyad in Raqqa Province.

Suleiman, a member of the insurgent faction Ahrar al-Sham, was held for 20 days, tortured, and executed.

We reiterate that ISIS is a terrorist organization with close connections to the terrorist Assad regime. It has become clear that ISIS is an enemy to the Syrian people, shedding Syrian blood and killing innocent civilians on numerous occasions.

The Syrian Coalition calls on those who have joined or allied with ISIS, thinking it is a group committed to the goals of the revolution, to leave the group immediately. ISIS has its own agenda which is definitely neither serving the revolution, nor the Syrian people’s interests.

The Islamic Front also issued a statement denouncing ISIS over Suleiman’s death. It has said that, despite a “truce” with ISIS, the killers of the doctor must be handed over for justice.

Uncertainty of Fate of 1000s of Civilians Fleeing Adra

Conflicting and confused information continues over the fate of thousands of civilians who tried to flee Adra, 12 miles north of Damascus, since last week.

Syrian state media claims that the army evacuated more than 6,000 people from the town, largely held by insurgents after weeks of fighting, and that the Government is setting up shelters and medical clinics. However, activists claimed that many of those who left were stripped of their ID cards, and some were detained.

Some video on Wednesday claimed that some people had made it to Qalamoun, while this footage is supposedly of others dropping to the ground amid regime bombardment of the area: