The Week Past, The Week Ahead: Iran Agreement, A Re-Formed Insurgency in Syria 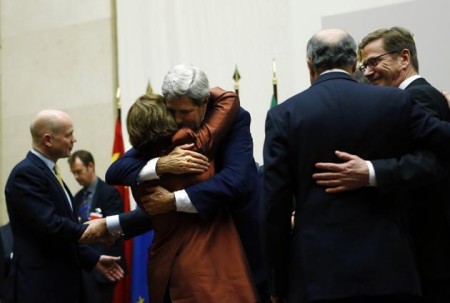 After more than a decade of on-and-off negotiations over Tehran’s nuclear programme, Iran and the 5+1 Powers (US, Britain, China, Germany, France, and Russia) signed an interim deal in Geneva on Sunday.

The agreement, initially for six months, is even more substantial than the most optimistic forecasts. In exchange for Iran’s significant limitations of its enrichment of uranium and for stricter inspections, the 5+1 Powers have not only unfrozen some Iranian assets but eased obstacles to Tehran’s oil exports as well as trade in other sectors.

Under the joint agreement, the two sides endeavor to complete a comprehensive agreement within a year. The goal is for Iran, which would ratify the Additional Protocols of the Non-Proliferation Treaty, to be treated just like any other State in the NPT which does not have nuclear weapons.

Initial reactions to the deal in Iran were welcoming, from the Supreme Leader to the general public. The successful conclusion to the talks overtook Ayatollah Khamenei’s harsh rhetoric earlier in the week, including his labelling of Israel as a “rabid dog” in the region.

Responses in Europe were also positive, but those in the US were mixed, with long-time critics of Iran denouncing the “appeasement” of Tehran.

The interim deal not only propels Iran towards further engagement with the US and other powers on the nuclear issue and on regional matters, including the Syrian crisis. It also bolsters the Rouhani Government at home, as it seeks to check the downturn in the Iranian economy — there may even be moves on long-standing social controversies, including censorship and the status of political prisoners.

The protests of the Israeli Government have been strident, but at the moment they look to be a limited challenge to the agreement. Saudi Arabia is maintaining a studied silence, amid reports of its concerns over a US rapprochement with Iran on regional issues.

The biggest obstacle to the detente would be a concerted effort from the US Congress to undermine the deal. So far, a few legislators have echoed the denunciations of anti-agreement pundits, but a campaign has not yet materialized.

Iran Special: Why This Interim Nuclear Deal Is Far Bigger Than You Think
Iran Document: Full Text of the Interim Nuclear Agreement
Iran Video Analysis: So Supreme Leader Called Israel A “Rabid Dog” — Does It Matter?

A busy week in Syria on the political and military fronts was marked by the merger of seven of the largest insurgent factions into an “Islamic Front”.

The major opposition forces in Damascus, Aleppo, and Idlib Province were among the groups, which command tens of thousands of fighters. The step is a response to the Assad regime, to the opposition Syrian National Coalition and Supreme Military Council — both of whom have been criticized by the factions for not adequately supporting the fight inside the country — and the Islamic State of Iraq and as-Sham, which has been clashing with other insurgent brigades across northern Syria.

The news was accompanied by signs of success for the re-formed insurgency, following recent regime offensives near Damascus and Aleppo. The opposition inflicted losses on regime forces — mainly Shia militias — in an attempt to break the siege of East Ghouta, near the capital.

The insurgency also made some progress between Damascus and the Jordanian border and checked the Syrian military’s offensive in Qalamoun — following the regime’s takeover of the town of Qarah — by blocking the Damascus-to-Homs highway. And, in the east, it captured Syria’s largest oilfield.

The re-alignment of the insurgency, probably backed by significant funding from Saudi Arabia and other Gulf States, is a challenge not only to the Assad regime but to the opposition’s umbrella groups of Syrian National Coalition and Supreme Military Council. If the Islamic Front can show success on the battlefield, it may also emerge as the political nucleus of the challenge inside Syria.

Meanwhile, any hopes of a breakthrough by President Assad’s forces before winter appear to have been dented by this week’s pushback by the insurgents. There are no signs of an advance in Aleppo, and the Qalamoun offensive — between Damascus and the Lebanese border — is not progressing beyond the capture of Qarah. Perhaps most significantly, the insurgents may be countering recent regime advances to the south of the capital, breaking the months-long siege of East Ghouta.