Russia Spotlight: Chechen Hajj Pilgrims Claim They Were Drafted In Saudi Arabia To Fight In Syria 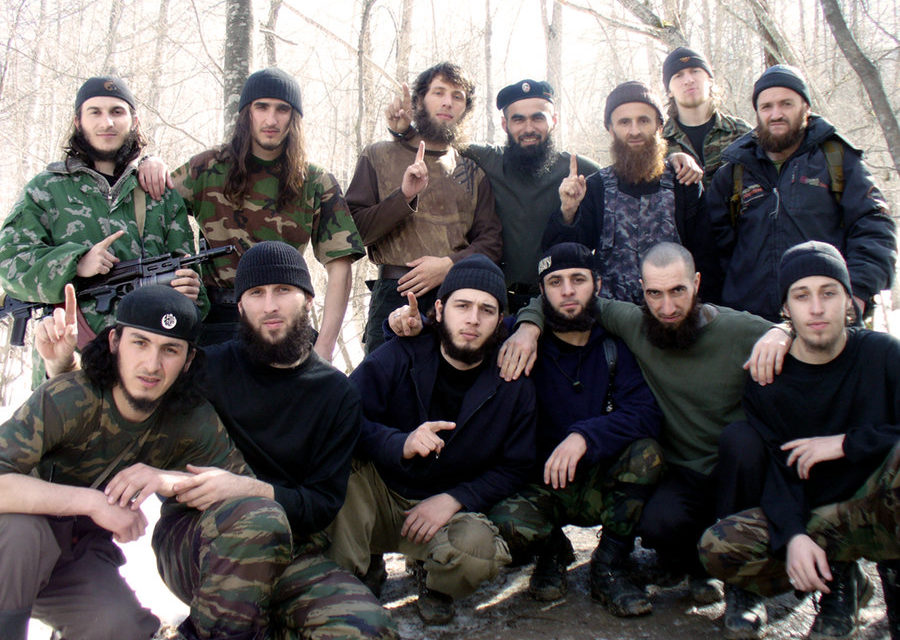 The Russian-language news site Kavkazskii Uzel, which focuses on events and issues in the North Caucasus, has spoken with several Chechens in Syria’s insurgency.

The Chechens describe how they went to Syria after traveling to Saudi Arabia to take part in the annual Hajj pilgrimage to Mecca.

Those interviewed for the story also explain how the wives of some of the Chechen fighters went to Syria.

“In our group, there was a 20 year old guy from the Shatoysky District (in the south of Chechnya). Before going through customs, when we were getting ready to return to Grozny, he was with us, but later on he disappeared. They say he went to the war in Syria, and use the Hajj trip as a means (of getting there),” Ahmad, one of the Chechen pilgrims who took part in the Hajj this year, told KU.

“One guy, who ran away to Syria after the Hajj, comes from the Vashendarai village (in the Shatoysky District of Chechnya). The second cousin of that guy went to Syria two or three months ago, to take part in military actions against Government forces. It’s not complicated to get to Syria from Saudi Arabia, there are military recruiters there,” said another pilgrim, who declined to give his name.

Several pilgrims told KU that Hajj pilgrims from Chechnya are being drafted to fight in Syria.

“After completing the major ceremonies in Mecca, we were taken back to Medina. It was there that they were conducting military recruitment. Among the recruiters were our fellow countrymen, emigrants from Dagestan,” said one resident of the republic, Imran T.

“During the pilgrimage to Medina, they were actually trying to persuade young people from our group to take part in the events in Syria. I told the guys that they could be provocateurs,” said another pilgrim from Chechnya, speaking on condition of anonymity.

We recall that 2,920 residents of the Chechen Republic took part in the Hajj this year. According to data from the Religious Administration of Muslims of Chechnya, no events or incidents were recorded during the trip.

Representatives of law enforcement agencies refused to comment on information regarding the flight to Syria of any of the Chechen pilgrims. Moreover, a representative of the Chechen Interior Ministry noted that information regarding the departure of young people to Syria continues to be gathered. “From time to time we do receive information that young people are going to Syria from Chechnya, but these communications need to be scrutinized and checked, because the data are very contradictory,” a source in the Chechen Interior Ministry said.

“It’s mostly the sons of former fighters who are going to the war there, many of whom grew up in Europe. For example, there was the subordinate to the warlord Masaev, Shamil Basaev. At the very start of the second military campaign he left for Europe. His son went to fight in Chechnya, and was killed there a few weeks ago,” a police officer said.

According to the police officer, the majority of the fighters get to Syria via Turkey, to where they travel from Azerbaijan, Georgia or other regions of the Caucasus or the South Caucasus.

Recently, the wives of those fighting in Syria are also traveling to Syria from Chechnya.

“A year ago, the daughter of my neighbor got married to a young lad, and after a few months he went to Syria. Her mom said that the daughter also went there with a bunch of young women — her husband insisted on it. The neighbor tried to talk her daughter out of it, but she wasn’t having any of it,” said a resident of Grozny, Lida S..

Another Grozny resident, Maryam U., said that her nephew sent his wife and young child off to Syria in the spring of 2013. “Their parents were against it. But the lad said that there are places in Syria where there isn’t any fighting and that he would put his family there,” the woman added.

Representatives of the local clergy, commenting on the situation, note that the war in Syria “cannot be considered jihad”. “First and foremost, in Islam, jihad is understood as force to establish the word of Allah on earth. The war in Syria is not about faith, and is not against an external enemy. It’s a civil war, in which two sides are fighting for power,” a mullah from the local mosques, Hassan, told KU.

Muradov: Most of the Chechens in Syria came from Europe

The majority of Chechens taking part in the military conflict in Syria came from Europe, after getting their initial ideological manipulation from the internet, according to Kommersant correspondent Musa Muradov.

“Some of them from from the North Caucasus, via Turkey, and some come from Europe. They are people who were born in the West, and whose parents went there as refugees many years ago. These are the so-called “computer jihadis”,” Muradov said.

Muradov also said that students from Islamic institutions are less affected by extremist ideologies, but noted that there are exceptions. “For example, last year Rustam Gelaev died in Syria last year, the son of the well-known Chechen field commander Ruslan Gelaev. Rustam wound up with the jihadis, as a student at a Syrian religious institute. However, you can’t say that most of those taking part in the conflict are students of religious institutions. There are those who got a totally secular education, and there are even women,” Muradov said.

In June this year a report by the US-based Washington Institute for Near East Policy and Flashpoint Global Partners provided detailed information about Rustam Gelaev, who was named as the son of Ruslan Gelaev, who was assassinated in 2004. Gelaev Jr. was allegedly killed in Syria in August 2012 , fighting for a group named “Chechen fighters in Syria”.

Jamal: the number of fighters from Russia is around 200 to 400

There are several hundred Russians involved in the Syrian conflict, according to Orhan Jamal, a columnist for Izvestia. “The credible figure is around 200 to 400 people, meaning all Russians, including Tatarstan and Bashkiria,” – Jamal told KU.

Regarding people from the North Caucasus who are fighting in Syria, Jamal cited the example of a resident of the Dagestani village Khadjalmakhi, Magomed Abdurakhmanov (Abu Banat). “For a long time, he worked at the Center for Combating Extremism, then he was fired, now here in Syria he made a stir as a “chopper-off” of heads.

According to Jamal, for those who wish to participate in military action, the war Syria is the “Middle Eastern mainstream”.

“In certain circles, including Islamic universities and groups, the message is circulating that Syria is a priority area. Apart from that, it is now sufficiently calm there, so that fighters can be in the comfort of the rear guard. This is so far removed from the situation in the North Caucasus, where (fighters) are crammed into crude trenches where they sit and eat dried macaroni,” Jamal said.

Jamal says that those Russians participating in the Syrian conflict won’t be able to return to civilian life in Russia.

“Thanks to legislation that has been brought into force, punishment has now been extended to people who participate in foreign formations abroad. So there is no point in assuming that they will be able to return to civilian life,” he said.

Russian citizens who participate in the activities of illegal armed groups in Syria are liable for prosecution when they return home to Russia, said Musa Pliev, an attorney from the law office “Musaev and Partners”.

“In accordance with Article 12 of the Criminal Code, “The application of criminal law against those who commit crimes outside of the Russian Federation”, a Russian citizen who commits a crime outside the country can be judged by the court of the state where the offense is committed , that is, directly by Syria. In this case, the citizens of Russia can not be held criminally liable for the same offense in Russia,” Pliev said.

The attorney also said that in accordance with Article 1, Paragraph 50 of the Constitution of the Russian Federation, those who are sentenced for a crime committed in Syria cannot be be re-prosecuted for the same crime in the Russian Federation. “But if for some reason a Russian citizen, who has committed a crime outside the borders (of Russia), was not sentenced by a foreign State, then he can be prosecuted according to Russian criminal law. This can occur if the act committed by that person is recognized as a crime in the same state in which it was committed,” Pliev said.

In this regard, the attorney noted that a Russian court cannot impose a punishment that exceeds the highest sanction designated by the foreign court.

However, Pliev doubted the possibility of receiving evidence for the prosecution of a Russian citizen who took part in the Syrian conflict. “In accordance with international agreements competent bodies may request from their foreign counterparts to provide the necessary investigative actions, and to gather evidence of a guilt of a certain individual. However, it is unlikely that our agencies will be able to obtain an evidential basis from a foreign State, in which there is a civil war.”

In June, the leadership of Chechnya recognized the participation of emigrants from the republic in the war in Syria. On June 6, the Director of the FSB, Aleksandr Bortnikov announced that around 200 fighters from Russia were fighting in Syria for the Caucasus Emirate, under the banner of Al Qaeda, in various affiliated structures. The Chechen power structures announced that there was no exact data about the number of Chechens fighting in Syria, however there could be between 200-500 people involved.

The head of the Federal Migration Service of Russia in Chechnya, Asa Dudurkaev, lost his job, in part because of his daughter’s stay in a camp of those participating in military action, as announced on November 21 by Chechen leader Ramzan Kadyrov via his Instagram account.