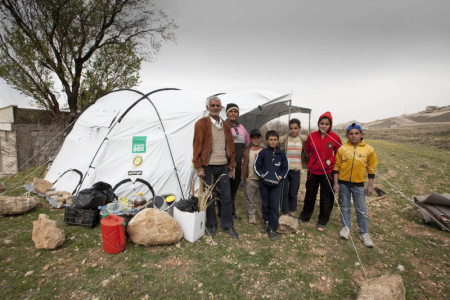 When we arrived at the UN’s Beirut refugee registration centre on a hot autumn day, hundreds of people had been waiting under an unrelenting sun for hours – there were mothers with newborn babies; children; elderly. The NGO War Child has installed a small playground nearby, but it was gated shut, and there were no children inside playing. The men stood patiently in line waiting to be registered. If I could define one emotion that seemed universal amongst the people we met that day, it seemed to be: baffled.

One man waiting in line was a 21-year old Syrian from Damascus, a university graduate who once worked at one of Damascus’ best hotels as a customer service representative before he fled the war. He had been waiting for hours, clutching his dossier of papers, before being told he was not eligible for refugee aid. He told us he had travelled all the way from Tripoli, northern Lebanon (a three hour journey by car) because he was told in Tripoli to report to Beirut. Here in Beirut, he had just been told to go back to Tripoli to register, because his parents were Palestinian – even though has born in Syria – he would not be eligible for benefits from the United Nations High Commissioner for Refugees (UNHCR).

He tried to argue his case: it was senseless. He left the line, defeated. The journey had been expensive. Worse, he was going back to a tent in Tripoli with no more knowledge than when he set out at dawn that morning.

“There is a complete lack of information,” he said. “I wasted days trying to register, now it looks like I cannot. This kind of experience makes you want to give up.”

Others waiting in line were not sure what they would be offered once they had registered. The less well off – from rural areas – were simply confused about what they were doing there at all. They said they came because neighbors advised them to. Most of them said they had come to the registration center because they thought UNHCR could help them get to another country. One man actually said he left Syria expecting to “go straight to the German Embassy, and they would put me in a hotel. I was very misled….neighbours told me I could go to Germany if I got to Lebanon.” These were stories we were to hear repeated many times during the week spent interviewing refugees across the country.

There are 13 distribution centers around Beirut alone – in the entire country there are nearly 90. The Beirut registration centre, with its tangible air of needy confusion, and the endless snaking line of hot, weary and frustrated refugees is just one of many where millions of Syrians find themselves struggling to make sense of their new lives in exile. It also sums up one of the most challenging and frequently underestimated aspects of humanitarian response: meeting the refugees need for information.

The refugees bring with them a legacy of fear that makes them distrustful of any information from outside sources beyond family and friends. This same legacy is also a major obstacle to their access to humanitarian aid, and to information that can help them survive and make sense of their situation.

Most of those we interviewed are not registered with UNHCR. They fear that by handing over their personal data, they will expose themselves, and potentially their family back in Syria, to unwanted dangers from Assad’s Ba’athist regime. “I was afraid there, why would I not be afraid here?” one man told me. “Hezbollah monitors everything.” The sad truth is that this is not an altogether unrealistic assumption: it’s no secret that Hezbollah operatives are active inside Syria on the side of the Assad government regime.