Syria Analysis: Why and How Insurgent Formation of an Islamic Front Changes the Conflict 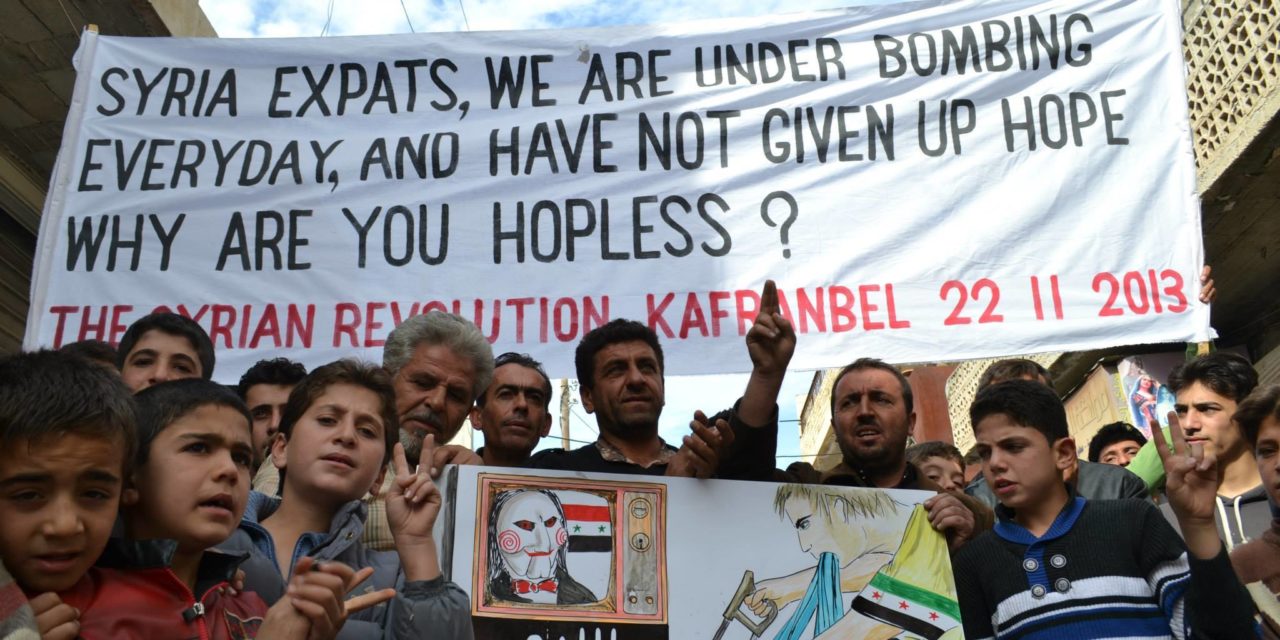 PHOTO: Protest in Kafranbel in northwest Syria on Friday

A source close to Syria evaluates Friday’s news of the formation of the Islamic Front by leading insurgent factions:

This is quite the middle spectrum of Islamic groups and forces in Syria. All of these are brigades actually fighting the regime, rather than being overly engaged in other activities like seeking funds or in-fighting. They fight side-by-side –or hand-in-hand — with smaller and not-so-prominent units formed by Christans, Druze, Kurds, and even Alawites.

Since Syria is an Islamic country, one shouldn’t overplay the adjective “Islamic”. Westerners should also note that the Syrian people have learned to rely on, first, God and, second, themselves — since the world has abandoned them.

Of course this is both a military and a political joint venture. At the moment, the military aspect counts most, because the new central command will solve a lot of issues from which insurgents suffered in most battles of the past.

Politically, the Islamic Front could in theory try to represent the biggest piece of the cake in the Syrian National Coalition — if they bother with an entity which is not exactly relevant and without a presence on the ground at all. More importantly, there is a major political player inside Syria now, laying the foundation for assembly of many groups and local committees — most probably soon acting alongside the Local Coordination Committees and others within the country. Sooner or later, they will be a partner in talks with outsiders, too.

As for the outsiders, they may try to stick with the Syrian National Coalition and the Supreme Military Council. That will be totally irrelevant, since the SMC is dried-out anyway. The Coalition and its interim government lacks support in Syria, and only addresses the very tiny percentage of Syrians who actually know such a body exists somewhere in Syria’s outer space. Even the humanitarian aid routed through Coalition entities is not seen as coming from them, because it gets distributed by local volunteers and is not labelled “Made in USA” or “With love from Britain via the Syrian Coalition”.

Does the lack of Western support have any impact on the Islamic Front? Not at all. Frankly, not having to sail around silly demands expressed by clueless Western powers who are not even trying to understand the situation on the ground and waiting for those so-called friends to fulfil their empty promises — which never happens but might, perhaps, maybe, hopefully, some day in the future, inshallah — makes things way easier. All the forces which built the Islamic Front exist and do more or less quite well without Western support now. Together they’ll be even stronger.

Whether or not Saudi Arabia and to a lesser degree Qatar might step in with increased support remains to be seen. The clear signal of the founding message is “No Extremists” — but de facto Jabhat al-Nusra is in (as a brother on the battlefield but not on the members list), while the Islamic State of Iraq and as-Sham is out. That establishes a platform Gulf States can openly support, without worrying about American reaction.

As for the Supreme Military Council’s Free Syrian Army, they are not dead. The founding of the Islamic Front will not change reality, like cooperation on the battlefields, and if General Idriss’ followers can establish a sort-of-central command structure some day, military alliances will work even better.

The unification will have another effect. Now small brigades can and must chose between the Free Syrian Army and the Islamic Front, or get eaten one by one by the greedy ISIS Pac-Men. I guess most small/local brigades will join one of the bigger forces/alliances soon, leaving lots of plain criminal gangs as ISIS prey.

When you look closely at ISIS participation in battles with the regime, you will notice that they usually operate outside the command structure. Too often they have joined battles with rather small units, just to claim victory afterwards. Now they mourn their casualties and blame the major brigades for not telling them of tactical movements. With their escapades they have managed to move themselves into the role of cannon fodder. Sadly, that will lead to them having more time and resources to oppress the liberated hinterlands, and it will be a major effort to remove them if Assad is overthrown. But one problem at a time, say the pragmatic leaders of the major Islamic forces.

So the bottom line is that the Islamic Front is pretty good news for the Syrian insurgency, and very bad news for those who do not care about Syria, as well as for its enemies.