Syria Analysis: Has the Islamic State of Iraq Taken Over the Insurgency? 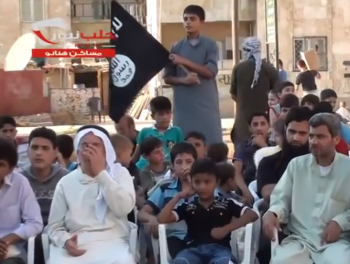 Has the Islamic State of Iraq “taken over” the insurgency in the north of Syria?

PHOTO: Demonstration in al-Bab in Aleppo Province, supporting the Islamic State of Iraq and as-Sham

One of the important developments we have been watching in the Syrian conflict is the “Growing Presence of the Islamic State of Iraq” in the north of the country. On Monday we assessed:

Rather than pointing to a conclusion of either triumph or defeat for ISIS, events show how the group is just one of a number of factions that continue to be involved in the contest for power in post-Assad territory.

While the situation is in flux, ongoing developments such as this morning’s claim of the capture of the ISIS “Emir” in the town of Tal Abyad by Kurdish militia, support this.

So does a range of material posted on Thursday by the blog Syria Comment. The YouTube videos and Facebook entries defy easy, simplistic conclusions of “ISIS is in control”, “ISIS is allied with” other factions such as the Islamist Jabhat al-Nusra, or “a looming, grand-scale Free Syrian Army effort to take on ISIS”.

Rather, the evidence so far — much of it presented in EA’s Syria Today coverage — offers these observations:

1. ISIS has established itself as a significant faction in the Syrian conflict in the north, extending as far as the country’s largest city, Aleppo.

2. ISIS has taken control of some towns, such as al-Dana near the Turkish border, and Tal Abyad.

3. However, ISIS has encountered local resistance in those towns and in other areas where it has tried to establish itself, from Syria Kurdistan to Aleppo. The movement appears to have had initial success, through force of arms, but then has faced the challenge of winning over the support of residents.

4. ISIS’s relationship with other factions is neither one of alliance or of complete antagonism. Instead, relations are determined on a case-by-case basis.

Thus, while ISIS and Jabhat al-Nusra have clashed in some areas including Aleppo, their flags were side-by-side at a Ramadan iftar celebration in Syria’s Largest city last week. And the headline case of the ISIS’s killing of a Free Syrian Army commander in Idlib Province has not prevented ISIS fighters appearing alongside other factions in battles with regime forces.

5. Overall, the evidence on ISIS supports — so far — the argument of a “fragmentation” of the insurgency. There is little cohesion in the fight against the Assad regime in the north. On the other hand, that insurgency has not collapsed, been defeated, or taken over by a foreign movement such as “Al Qa’eda”.

Aleppo: Reports for months from Syria’s largest city have described a contest for food and other supplies, often leading to clashes, between ISIS and other factions in insurgent-held areas.

Recently, these reports from Aleppo have intersected with the effect of the insurgent-led “siege”, an attempt to choke off regime forces in their section of the city. ISIS has reportedly competed with other opposition groups for control of the key Bustan al-Qasr checkpoint, where civilians cross with food and goods between insurgent and regime neighborhoods.

Despite this tension, both ISIS and FSA flags were present last week at an Aleppo iftar event:

Raqqa: In Raqqa, the largest city claimed by insurgents so far in the Syrian conflict, ISIS has been present in activities such as the enforcement of local regulations. In this video, ISIS fighters burn hashish:

The faction has also detained residents, such as journalist Mohamed Matar.

There have been demonstrations in Raqqa both for and against ISIS. This footage purports to show a rally challenging the group:

A protest including women and children:

Al-Dana: The headline video for the situation in al-Dana, the town near the Turkish border taken by ISIS earlier this month, continues to be Al Jazeera English’s report on 14 July:

ISIS fighters at a checkpoint outside the town:

Azaz: In nearby Azaz, there have been rallies both for and against ISIS.

Jarablos: The best description of the situation in the town in Aleppo Province remains a report of July 12 from Damascus Bureau.

ISIS declared an “Islamic Emirate”, detaining some people and putting its flags on some buildings.

However, the leadership of the town continued to be under a council with a number of factions, including Kurdish groups and elements of the Free Syrian Army. That position is reinforced by funding from the Aleppo Governorate Council, which also has representatives from across the spectrum of the insurgency.

Tal Abyad: Before the developments of the last 24 hours, in which Kurdish militia have reportedly detained ISIS’s “Emir” in the town in Raqqa Province, signs of tension included a claim that ISIS confiscated generators, given by international organizations, to provide drinking water.

Manbij: In Manbij in Aleppo Province, residents have protested against ISIS amid accusations that it has destroyed works of art and kidnapped a local leader.

ISIS has responded with images of a meeting in support of the group.

Al-Bab: There have been rallies for ISIS in al-Bab in Aleppo Province, and the group has promoted itself with claims to provide services such as school buses.