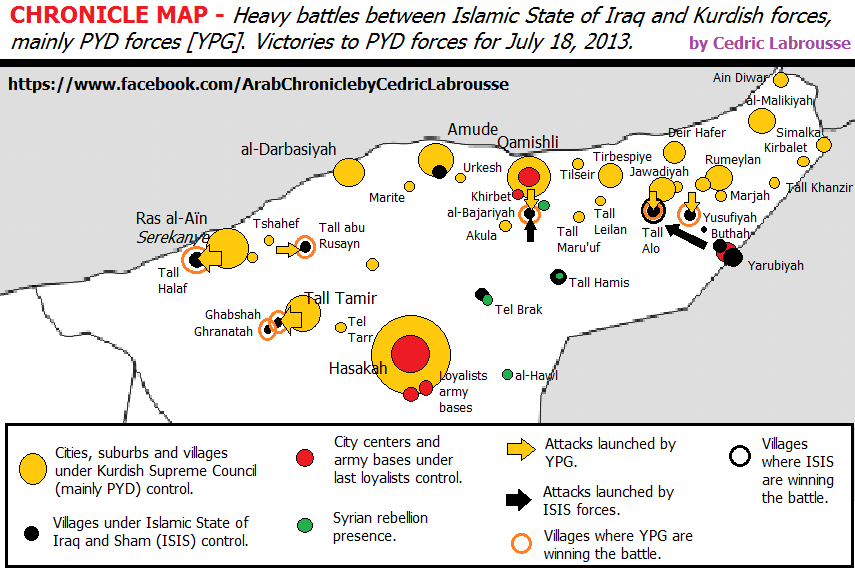 With the regime’s position versus the insurgency once again settling into deadly stalemate across Syria, the complicating development is a new front in the conflict — the Kurdish militia YPG, affiliated to the political movement PYD, battling with insurgents across the north.

The PYD-YPG are only one of the Kurdish groups in Syria, some of whom have supported the insurgency, but it has become the most prominent, both in political and military terms. Since the YPG took over Ras al-Ain near the Turkish border last week, its fight with the insurgency — especially the Islamist insurgency Jabhat al-Nusra — has expanded.

On Saturday, clashes were reported from the northwest near Ras al-Ain to the east in Hasakah Province. The YPG posted confirmation of the deaths of four members in the east, and both the Kurds and insurgents have claimed the killing of dozens of fighters this week. Unconfirmed reports claimed a fight for control of the town of Tal Abyad.

Information is still sketchy, but there is no sign of talks to ease the conflict, let alone pursue a political resolution on the lines sought by a series of discussions — notably one pursued by Iraqi Kurdish leader Masoud Barzani — last year.

At least 20 civilians have been killed by mortars, fired by regime forces, that hit the main market in Ariha in northern Syria.

Men carrying one of the injured from the attack:

Confirmation from the Twitter account of the Kurdish political movement PYD that the Islamist leader of Tal Abyad, Abu Musab — alternatively described as “Islamic State of Iraq” or “Jabhat al-Nusra” — has been released for Kurdish civilians, after he was detained during the Kurdish takeover of the town:

State media is featuring a report that the Republican Guard has conducted a major ambush in Adra in Damascus Province, killing more than 50 insurgents.

Graphic images and a report have also been posted on Facebook.

This passage stands out in a New York Times report on a Syrian business, Rafiq Lotof, who has returned from the US to assist the Syrian regime:

At the entrance to a Shiite Muslim quarter, Mr. Lotof inspected a new checkpoint guarded by a baby-faced 18-year-old clutching a rifle nearly his height. Fresh from training in Iran, the teenager belonged to one of the growing neighborhood militias that Mr. Lotof is arming and organizing on behalf of the Syrian government — part of a nationwide effort to enlist more citizens in the fight against the rebels challenging President Bashar al-Assad.

After volunteering to defend a Shiite shrine south of Damascus, the young man, Hussein Beydoun, said he was flown with 500 other Syrian Shiites to Iran, where Revolutionary Guards trained them to use rifles, rocket-propelled grenades and mortars.

Kurdish news out let Hawar reported on Sunday that the YPG has called on Kurds in Ayn al-Arab (Kobani) to support Kurds in Tel Abyad. The Kurdish group also vowed that it would not stay idle following attacks on Kurds.

The report comes amid continued tensions following fighting in the predominantly Kurdish border region over the past five days between Islamist insurgents and Kurdish groups in the area.

Lebanon’s Caretaker Foreign Minister Adnan Mansour said on Saturday that Syrian refugees in Lebanon are a “heavy burden” on the country’s economy. Mansour called for an international conference on Lebanon to address this issue.

Mansour’s comments came after the UN High Commission for Refugees reported on Friday that the number of Syrian refugees in Lebanon has topped 625,000.

According to the Daily Star, while the UN reported a slight decrease in new arrivals to the Bekaa Valley compared with the period when Syrian insurgents battled with regime forces for control of the Al Qusayr border town, the number of refugees in Lebanon has risen over overall and shelters are exhausted.

The UNHCR is continuing to work with Lebanon’s Social Affairs Ministry to find suitable sites for both tent settlements and shelters, the report said.

Video: Children & a Mother Talk About Life in Besieged Homs During Ramadan

Claimed footage has been posted of the body of General Hassan Yusuf, the commander of Syrian forces in the town of Khan al-Assal in Aleppo Province.

Insurgents have been pressing the Syrian military in the town throughout the past week.

Videos: Propaganda Videos For Islamic State Of Iraq And As-Sham

Two propaganda videos posted this week for the Islamic State of Iraq and As-Sham in Syria.

The first shows a convoy of ISIS fighters passing through a Syrian town. Set to stirring music, the video shows black-clad fighters posing with machine guns on the backs of trucks sporting ISIS flags:

The second video — apparently taken in Aleppo, though it is not clear in which neighborhood — shows an foreign ISIS fighter explaining why he came to Syria to fight against Bashar al-Assad. The smiling and charismatic fighter has captured the attention of his — admittedly rather small — audience, particularly of the children present, who enthusiastically wave ISIS flags: 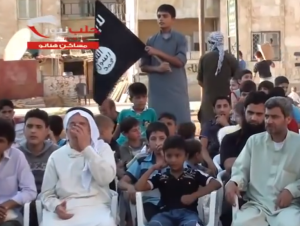 The ISIS representatives at the event seem to have brought ISIS-branded goodies — these pizza-box sized ISIS boxes for example: 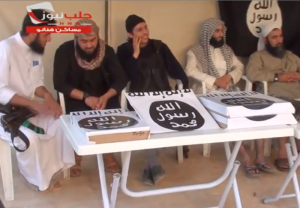 Note: we would be interested to know where the speaker is from.

See also our assessment this morning of the current situation regarding ISIS’s position in the Syrian insurgency.

Video: A (Friendly) Tug-of-War Between Jabhat al-Nusra and Islamic State of Iraq

A Ramadan party in Aleppo features a tug-of-war between supporters of the Islamic State of Iraq and as-Sham and of the Islamist faction Jabhat al-Nusra:

Syria Analysis: Has the Islamic State of Iraq Taken Over the Insurgency?

As fighting continues in the Damascus neighborhood of Qaboun, which has been under heavy regime attack this past week, activists on Facebook issued a plea that insurgents in the area be successful and the neighborhood not fall to Assad’s forces.

This video, posted on Sunday, shows black smoke rising from residential buildings in Qaboun, and is claimed footage of the aftermath of regime shelling:

This video, posted on Friday night, purports to show insurgents in Qaboun as they set out to search local houses for “shabiha” — pro-Assad fighters. The second half of the video, starting at 01:02, shows heavy nighttime clashes between insurgents and regime fighters in the neighborhood’s streets.

Activists and a Free Syrian Army representative are claiming on social media that Kurdish fighters have taken control of the town of Tal Abyad from the Islamic State of Iraq, detaining the “Emir” Abu Musab.

Reports differ on how Abu Musab was captured. Some activists assert that he was on his way to a Kurdish school, having given the orders to destroy it. Others allege he and his fighters were trying to place bombs around a Kurdish school or even that he was inside the school, threatening to detonate an explosives belt.

One — obviously unverifiable — claim is that weapons were sent from Turkey to both groups, and that as a result, JAN and ISIS began to concentrate forces on checkpoints around the town, and that after that four people — including Abu Musab — tried to blow up a school but were arrested by local committees charged with the school’s protection.

This claimed image of Abu Musab is circulating on Twitter:

Here is the Asshole "Abu Mus'ab", Leader of Al-Qaida branches "JAN-ISIS" in N Syria. Captured by the Kurdish YPG. pic.twitter.com/N5J112fADY

The Local Coordination Committees report 80 people killed on Saturday, including 21 in Aleppo Province, 17 in Idlib Province, and 16 in Damascus and its suburbs.

The Violations Documentation Center reports that 66,745 people have been slain since the start of the conflict in March 2011, an increase of 84 since Saturday. Of these, 50,861 were civilians, a rise of 49 from yesterday.