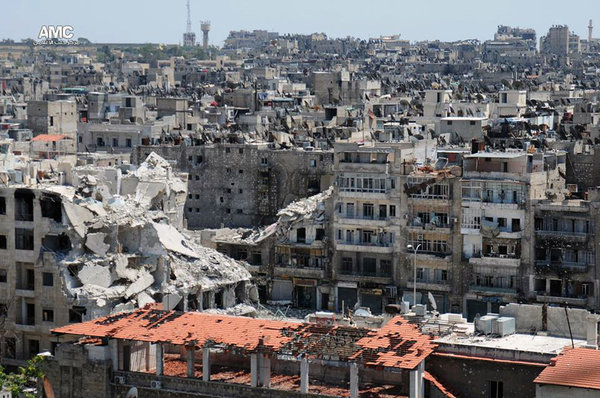 It is just chatter at this point, but reliable EA sources indicate that insurgents are considering an offensive in Aleppo, Syria’s largest city which has been locked in military stalemate since July 2012.

While there is no single catalyst for the offensive — new weapons to the opposition are still limited, and there are no significant new forces — insurgents point to several reasons for a move. The attack may divert some of the regime’s troops from their current assault on the opposition in Homs. It may also, by showing progress, assuage anger among Aleppo residents over the insurgency’s siege on regime-held areas of the city, cutting off vital supplies. And, of course, any success would be a significant boost to the opposition, countering the recent narrative of “Assad advance” after the regime’s takeover of the town of Qusayr and nearby villages last month.

The insurgents have already ratcheted up pressure on the Syrian military with the siege, cutting off highways into Aleppo and rendering Aleppo International Airport almost unusable.

The signal for an offensive? Watch for any substantial movement of civilians — insurgents will them to clear the area before attacking Syrian troops and pro-regime militia.

EA sources also indicate the insurgents may move on Idlib city in northwest Syria. Most of the nearby countryside is held by the opposition, and there have been fierce clashes between Idlib and nearby towns.

If the insurgents are successful in their plans, one other lesson may be significant: they will have advanced despite, not because of, foreign supplies — largely held up by US reticence over provision of heavy weapons. Any victory will have occurred largely because of captured arms from Syrian forces and home-made equipment.

An insurgent brigade declares the “liberation” of the al-Rashidin district of Aleppo:

Video: Destruction Of Tomb In Homs

Video posted on Thursday shows claimed footage of the destruction of the tomb of Khaled Ibn Al-Waleed. The tomb — considered an important Islamic landmark — is in the corner of a mosque in Homs. Khalid — a companion of Mohammad — is considered a great general and his tombstone displayed a list of over 50 battles that he commanded undefeated as well as a sword and shield.

Claimed footage from Aleppo’s Bustan al Qaser neighborhood on Thursday, after insurgents allowed a small number of food deliveries through to Western Aleppo earlier today — the first day of Ramadan. Regime snipers terrorize those civilians who try to cross over from insurgent-held to regime-controlled areas.

As Soup Kitchens In Turkey Serve Food To Syrian Refugees, Thousands Still Wait On The Border

This video report by the UNHCR, posted on Tuesday, briefly examines the plight of Syrian refugees in Turkey. Soup kitchens, like the one shown in the video, provide food to those who would otherwise have gone hungry.

The refugees who have made it to Turkey, whilst in a precarious situation, are the lucky ones. In an attempt to contain the flood of refugees from Syria, Turkey has built a total of 14 tent cities in Hatay, Şanlıurfa, Gaziantep, Kahramanmaraş, Osmaniye, Adıyaman and Adana as well as total of five container cities in Kilis, Şanlıurfa, Malatya and Gaziantep. Yet there are tens of thousands more Syrians still waiting to cross the border into Turkey.

A report on Thursday by the Aleppo Media Center describes the situation for Syrian refugees waiting to be allowed to cross the border into Turkey. The AMC say that there are about 3,000 families living in about a thousand tents in the Bab al-Salam camp, a “unique tragedy in the record of the history of the Syrian revolution.” Some refugees say they were injured after regime airstrikes hit the camp.

The AMC cite one of the refugees, Hajj Mohammad, a middle-aged displaced man from Aleppo: “only a quarter of an hour separates those who were injured from life or death in a Turkish hospital.”

“It’s been five months since we got here .. When I arrived with my family we found hundreds who had been here two months or more .. And after us came hundreds of families hoping to be allowed to enter Turkish territory, but despite all these months, we are still waiting.”

The media wing of Islamist faction Harakat Ahrar al Sham al Islamiya have launched an Android App, which they say will help followers keep abreast of military, labor and civilian news relating to the group and also of the wider Syrian Revolution. The App is currently available on Google’s Android store — although it is not clear whether Google will move to remove it. The move is part of a wider trend of “media mujahidin” — the concept of using new media platforms to disseminate information about the mission and aims of particular jihad groups.

A Syrian activist website reports that fighters of “The Islamic State of Iraq and al-Sham” in insurgent-held Raqqa have arrested journalist Mohamed Matar.

Matar was reportedly detained during a sit-in in front of the Governorate headquarters.

Lebanon’s President Calls For Hezbollah To End Involvement In Syria

In a reference to Hezbollah’s ongoing involvement in fighting in Syria, Lebanese President Michel Sleiman called again on Wednesday for Lebanese groups to withdraw from the Syrian conflict.In a statement, Sleiman emphasized his support for the Baabda Declaration, which supports political neutrality.

“[Everyone] should abide to Baabda Declaration and stop interfering in the Syria crisis because it was proved that Lebanon has no interest in such [involvement],” the statement said.

The Syrian National Coalition on Wednesday accused Moscow of making a “desperate attempt by Russia to deceive the world and justify Assad’s crimes” following allegations by Russia that an insurgent group used chemical weapons.

Russia on Thursday claimed that its investigations showed that an insurgent group, Bashair al-Nasr, used sarin gas in Khan al-Assal, outside Aleppo. Insurgents and the Assad regime have accused each other of using chemical weapons during the incident in Khan al-Assal on 19 March, during which at least 27 people died and dozens more were injured. Russia claimed that the insurgent group fired the weapons using “Bashair-3 unguided projectiles”.

The SNC said that the evidence Russia provided was “false and clearly fabricated. The Syrian people consider Russia, Assad’s partner in the murder of innocent Syrian civilians.”

In our opening summary this morning, we evaluated: “[An insurgent offensive] may also, by showing progress, assuage anger among Aleppo residents over the insurgency’s siege on regime-held areas of the city, cutting off vital supplies.”

An update by Reuters summarises the challenge:

Syrian rebels have fired into the air to disperse a protest by civilians in a rebel-held district of Aleppo against a blockade preventing food and medicine reaching government-held areas of the northern city of Aleppo, residents have said.

Rebel fighters have stopped supplies entering western Aleppo for weeks. The tactic is aimed at weakening the supply routes of President Bashar al-Assad’s forces but residents said that thousands of civilians were now hungry….

Video footage uploaded to YouTube and posted by the opposition Bustan al-Qasr Information Office showed men at the protest chanting, “the people want an end to the blockade.”

A rebel fighter brandishes a pistol and then a gunshot is heard as the video ends.

An opposition activist group called the Aleppo Martyrs said rebels fired at the protesters, killing one person and wounding several others. But a resident at the protest said the man was
killed before the protest by army sniper fire as he tried the cross between rebel and government-held territory.

The spokesman for the Free Syrian Army, Louay Al Mokdad, told pan-Arab daily Alsharq Alawsat that the FSA condemned a car bomb attack in southern Beirut on Tuesday, saying that “such an attack is not compatible with the ethics and doctrine of the Free Syrian Army that fights for integrity and freedom in Syria.”

Al-Mokdad said the FSA considered Hezbollah responsible for the attack, accusing the Lebanese group of being indirectly responsible for creating a climate of violence because it had adopted sectarian rhetoric.

Meanwhile, Lebanese outlet LCBI reported Wednesday that calm had returned to Bir al-Abed in south Beirut on Wednesday, the location of the blast that injured 53 people. The bomb went off in a parking lot near the Islamic Coop supermarket, which is located close by Hezbollah’s “security square,” where many of the party’s officials reside and have offices.

Fighting Between Kurdish Militia and Free Syrian Army in North

Since May, Efrin has been a focal point for conflict between the FSA and Kurdish groups, with the insurgents cutting off supplies to the town amid a series of fights.

The Local Coordination Committees claim 64 people were killed on Tuesday, including 25 in Damascus and its suburbs and 18 in Aleppo Province.

The Violations Documentation Center reports that 65,789 people have been slain since the start of the conflict in March 2011, an increase of 70 since Tuesday. Of these, 50,264 were civilians, a rise of 35 from yesterday.