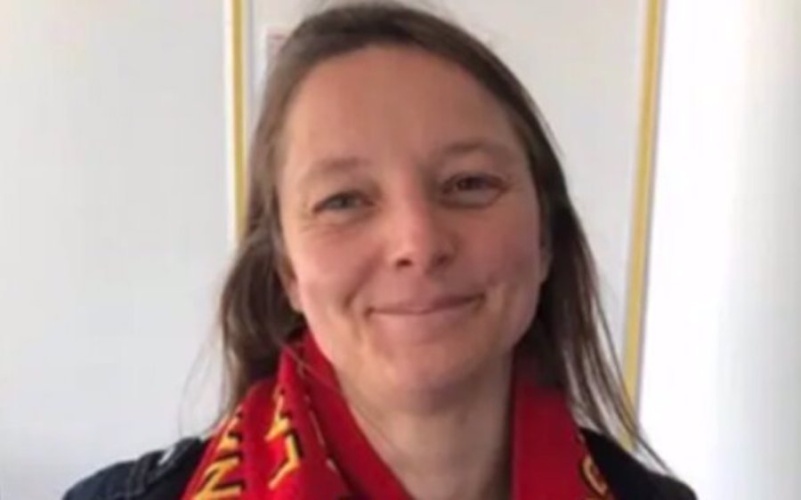 Iranian authorities have confirmed the arrest on May 7 of French nationals Cécile Kohler, 37 (pictured), and Jacques Paris, 69.

Justifying the detentions, thh Intelligence Ministry claimed the pair were involved in ongoing protests by teachers across Iran over pay, working conditions, and the imprisonment of union leaders.

The protests escalated around May Day, with security forces making further arrests.

See also At Least 13 Teachers Arrested Amid Protests Across Iran

Iranian State outlets claimed a video of Kohler and Paris participating in the protests, audio of a woman and a man are talking about a “battle to gather a majority” for a “revolutionary doc”, and photos of the French nationals visiting imprisoned activists and linking them with Rasoul Bodaghi of the Iran Teachers’ Union.

Kohler is the international representative of the the FNEC FP-FO education union.

The Iranian Intelligence Ministry announced on Wednesday that it arrested two European for creating “insecurity”, without revealing their names or nationalities.

Christophe Lalande, the federal secretary of the FNEC FP-FO education union, said Kohler — the union’s international representative — and her husband are missing after going on holiday in Iran. They were due back in France earlier this week.

A “diplomatic source” confirmed that the Kohlers are in detention.

There are two other French political prisoners in Iran: academic Fariba Adelkhah, held since June 2019, and tourist Benjamin Briere, imprisoned in May 2020.

Adelkhah’s partner and academic colleague Roland Marchal was freed in March 2020 in a prisoner exchange for an Iranian engineer accused of violating US sanctions.

The detentions were announced as the broker of the Vienna nuclear talks, Enrique Mora, is in Tehran for talks with senior Iranian officials.

The discussions to renew the 2015 nuclear agreement were close to resolution early this year. However, they are now stuck, in part because of Tehran’s demand the US remove the Islamic Revolutionary Guards Corps from a list of terrorist organizations.

The Revolutionary Guards have detained foreign and dual nationals for years, using them as bargaining chips in political and economic discussions.

In March, Anglo-Iranian nationals Nazanin Zaghari-Ratcliffe and Anousheh Ashouri were released after the UK agreed to pay a historic £400m ($488m) debt to Tehran.

But Iran refused to release a third Anglo-Iranian, environmentalist Morad Tahbaz, because he also holds a US passport. Other Iranian-American nationals remain behind bars, including oil executive Siamak Namazi and his 85-year-old father Baquer, imprisoned for more than six years.

In the past week, trying to halt Sweden’s war crimes trial of a former Iranian official, Iranian officials have again threatened to execute Swedish-Iranian medical researcher Ahmadreza Djalali. Security forces also seized a Swedish tourist in his 30s as he was travelling with other Swedes.