At Least 13 Teachers Arrested Amid Protests Across Iran 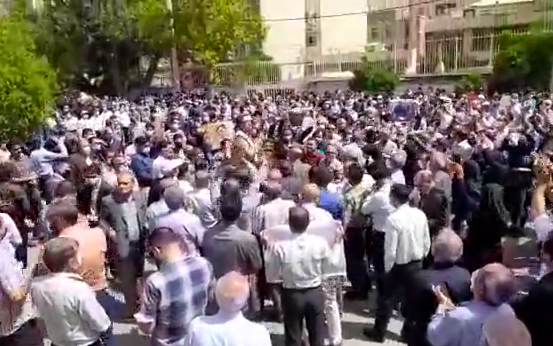 Despite the arrests of some of their leaders, teachers staged protests across Iran on May Day, which is also Teachers’ Day.

Trying to stem the demonstrations, authorities detained at least four union activists in Tehran on Saturday. Three other activists were reportedly seized in the western city of Marivan, and others were summoned in cities across the country.

However, teachers gathered on Sunday for rallies in more than a dozen cities, including Shiraz, Arak, Kermanshah, and Sanandaj. They called for better working conditions and the release of imprisoned colleagues.

In Bushehr in southern Iran, police reportedly arrested at least six teachers and used force to disperse the gathering.

Teachers have periodically protested and struck to seek better pay, conditions, and rights. The demonstrations peaked in late 2020 and early 2021.

Iranian authorities have responded with arrests and, in some cases, long prison sentences for leaders of the teachers’ union.

Iranian authorities have attempted to repress and silence activists in labor organizations and trade unions who have led protests against low wages and declining living standards. Moreover, a significant number of reported work-related safety incidents and cases of unpaid wages demonstrate perilous working conditions and a further erosion of labor protections in recent years.