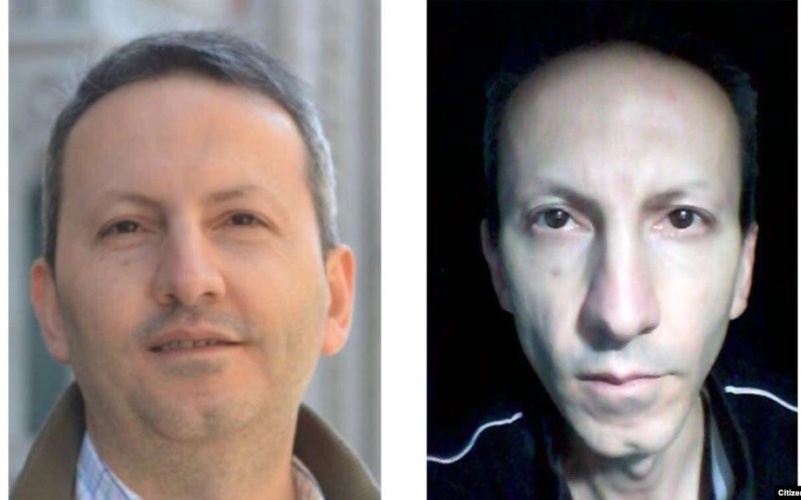 Images of Ahmadreza Djalali before his detention and in Evin Prison, Tehran, Iran

Iranian officials have reiterated their threat to execute Swedish-Iranian disaster medicine researcher Ahmadreza Djalali, ruling out an exchange for a former Iranian official being tried in Sweden for war crimes.

“Djalali has been sentenced to death on several charges and the verdict is final. The sentence will be carried out,” Iran judiciary spokesperson Zabihollah Khodaian said.

The Swedish trial of former Iranian judiciary official Hamid Nouri, charged with involvement in the executions of thousands of political prisoners in 1988, ended last week. The verdict is due on July 14.

Khodaian insisted, “These two issues are not related. Mr. Noury is innocent and Mr. Djalali was arrested two years prior to Mr. Noury’s case. There is thus no possibility of an exchange of these two individuals.”

The semi-official news agency ISNA reported on Wednesday that Djalali will be executed on May 21. The disaster medicine researcher was seized in 2016 as he attended an academic conference in Tehran.

The threat comes amid Sweden’s war crimes trial of former Iranian judiciary official Hamid Nouri, charged with involvement in the executions of thousands of political prisoners in 1988. The verdict is due on July 14.

Extremely worrying media reports today that Iran may enforce the death penalty on Swedish citizen Ahmadreza Djalali. 🇸🇪 and 🇪🇺 condemn the death penalty and demands that Djalali be released. We have repeatedly stated this to Iranian representatives. We are in contact with Iran.

She said she had spoken with Iranian Foreign Minister Hossein Amir Abdollahian about the “disturbing reports”.

Neither Amir Abdollahian nor the Iranian judiciary made any public comment.

However, Amir Abollahian protested that Nouri’s trial in Sweden is “illegal”. On Monday, the Iranian Foreign Ministry summoned the Swedish Ambassador to denounce “the baseless and fabricated accusations that the Swedish prosecutor made against Iran during Noury’s court case”.

Hadi Ghaemi, executive director of the Center for Human Rights in Iran, noted, “The Iranian government is engaging in blatant extortion. This thuggish behavior is an intimidation tactic aimed at disrupting a fair trial against a man accused of heinous human rights violations.”

ORIGINAL ENTRY, DEC 2, 2020: Concern is rising that Swedish-Iranian scientist and political prisoner Ahmadreza Djalali will soon be executed in Iran.

Djalali was to be taken from Tehran’s Evin Prison to Rajai Shahr Prison on Tuesday, part of the process for death sentences which are often carried out on Wednesdays, according to human rights groups.

The judge overseeing the arbitrary killing reportedly said the family would be granted a last-minute visit before his execution. Unconscionable. And unlawful. Human lives just pawns in international politics, tit for tat, no end in sight.

The Iran Human Rights campaign said, “Ahmadreza Djalali is at imminent risk of execution and only a strong and urgent reaction from the international community can save his life.”

Reports circulated last week of the imminent execution of Djalali, detained in April 2016 after he was invited to a University of Tehran conference and sentenced to death in October 2017.

I cannot tell my children what is happening these past four years or explain. How do I explain this?

Last week Iran freed Australian academic Kylie Moore-Gilbert, held for 26 months, in exchange for three Iranians detained in Thailand over an assassination plot. But on Friday, tension escalated when Mohsen Fakhrizadeh, the physicist in charge of Iran’s nuclear program, was assassinated in Abzard, 70 km (43 miles) east of Tehran.

Swedish Foreign Minister Ann Linde, said last week that she has spoken with Iranian counterpart Javad Zarif. But the Iranian Foreign Ministry has said it cannot intervene in the cases of imprisoned dual nationals.

Djalali, a specialist in disaster and emergency medicine, is a lecturer at the Karolinska Institute in the Swedish capital Stockholm. After he was seized in Tehran, he was accused of providing information to Israel to help it assassinate four nuclear scientists between 2010 and 2012.

No evidence was presented in public, and Djalali’s friends say he was forced into a “confession”.

There have been claims that Iranian officials are seeking to trade a reprieve for Djalali for the release of the Iranian diplomat Assadollah Assadi, on trial in Belgium over a plot to explode a bomb at an Iranian opposition rally in 2018.

Assadi is claiming diplomatic immunity and is refusing to appear at the trial.