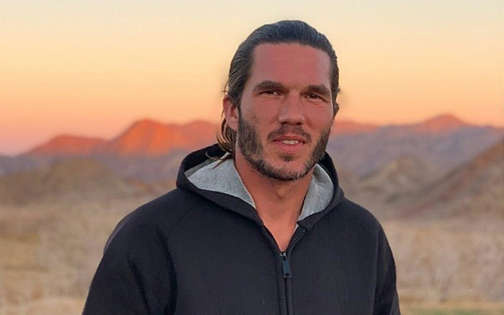 French tourist Benjamin Briere during his trip from Scandinavia to Iran, which began in 2018

French tourist Benjamin Briere has been sentenced to eight years in an Iran prison.

Briere’s Paris-based lawyer Philippe Valent announced the punishment on Tuesday. He said the trial for espionage is politically motivated, amid Iran’s pursuit of prisoner exchanges and the Vienna talks over Tehran’s nuclear program.

It is unacceptable that Benjamin Briere remains a hostage to negotiations on the part of a regime that persists in its desire to arbitrarily detain a French citizen and use him as a bargaining chip….

Benjamin Briere obviously did not — nor ever — benefit from any form of fair trial before impartial judges. This ruling is the result of a purely political process.

One of Briere’s Iranian lawyers, Saeed Dehghan, said the tourist was shocked by a sentence which was harsher than expected.

Dehghan explained that the initial charge against Briere carried a maximum sentence of three years. However, as the trial ended, the allegation was changed to “collaboration with an enemy state”, with a maximum of 10 years.

He added that the hearing was transferred “at the eleventh hour” from the original Revolutionary Court: “Most likely this was because the judge at Branch 3 had become sympathetic to our arguments.”

“Second, the charge against our client was originally based on Article 503 of Iran’s Islamic Penal Code, which carries a maximum penalty of three years in prison for espionage, in connection with his drone photography,” Dehghan said.

“But when the trial ended, we saw that the charge had been changed to ‘collaboration with an enemy state,’ in this case France, in accordance with Article 508 of the Islamic Penal Code, which carries a maximum punishment of 10 years in prison,” added Dehghan.

Dehghan said the sentence will be appealed.

Detained in a prison in northeast Iran, French tourist Benjamin Briere has begun a hunger strike.

“The feeling of abandonment — and distress — has led [him] to embark on a hunger strike in order to alert Iranian and French authorities to the absurdity of his detention,” said Briere’s sister Blandine Briere and lawyer Philippe Valent in an e-mailed statement.

Briere, 36, was detained in May 2020 after he flew a remote-controlled mini-helicopter in the desert near the Turkmenistan-Iran border. He has been charged with espionage and “propaganda against the system”.

A French Foreign Ministry spokesperson said France’s official maintain close contact with Briere, visiting him in Valikabad Prison in Mashhad on December 21 and contacting him on Monday. The spokesman said the charges are “incomprehensible”.

The lawyer for French citizen Benjamin Briere (pictured) has confirmed that he will be charged by Iranian authorities with espionage and “propaganda against the system”.

Said Dehghan said on Sunday that official have told him their investigation is complete.

“The prosecutor is preparing the indictment and sending it to the [Islamic] Revolutionary Court for the continuation of the judicial process,” the attorney said.

Iranian authorities say Briere flew a drone and took photographs in a prohibited area near the Iran-Turkmenistan border.

Dehghan said the charge of “propaganda against the system” was added because of a Briere social media post pointing out hijab is mandatory in Iran but not in other Islamic countries.

Briere’s sister Briere has written an open letter calling on French President Emmanuel Macron to seek her brother’s release over the “baseless” charge. She said Briere is being held as a “negotiating tool” amid talks on the 2015 nuclear deal between Iran and the 5+1 Powers (France, US, UK, Germany, China, and Russia).

ORIGINAL ENTRY, MARCH 16: Continuing to seek leverage with other countries through political prisoners, Iran has charged another foreign national with “espionage” and “propaganda against the system”.

The lawyer for French tourist Benjamin Briere, detained since last May, confirmed that his client has been accused of taking pictures in “forbidden areas” and of “raising the question in [social] media” about why hijab is mandatory for women in Iran but optional in other Islamic countries.

“My colleagues and I believe that these charges are false and baseless, but we have to wait for the judge to conduct a full investigation in the next few days and announce his verdict,” attorney Saeed Dehghan said.

A spokesman for the French Foreign Ministry said Briere is “benefitting from consular protection” with the French in Tehran in “regular contact” with him.

Dehghan said Breire is held in Vakilabad Prison in Mashhad in northeast Iran: “His health is good and he has access to his lawyers.”

The tourist was arrested after flying a helicam, a remote-controlled mini-helicopter used for video or pictures, in the desert near the Turkmenistan-Iran border.

Iranian security agencies and Revolutionary Guards have regularly detained foreign and dual nationals, often holding them on claims of “espionage” with no presentation of evidence.

Some of the nationals have been freed in exchanges for Iranians held overseas, but others remain behind bars as Iran maneuvers with Western countries over political issues and its nuclear program.

On Sunday, Anglo-Iranian charity worker Nazanin Zaghari-Ratcliffe was charged by a Tehran Revolutionary Court for “propaganda against the system”.

Zaghari-Ratcliffe completed a five-year sentence on April 7. However, rather than allowing her to rejoin her husband and young daughter in the UK, Iran’s authorities imposed the new charge.