UPDATE: “I Lost Everything Overnight” — The Syrian Refugees Deported for Coming to Istanbul 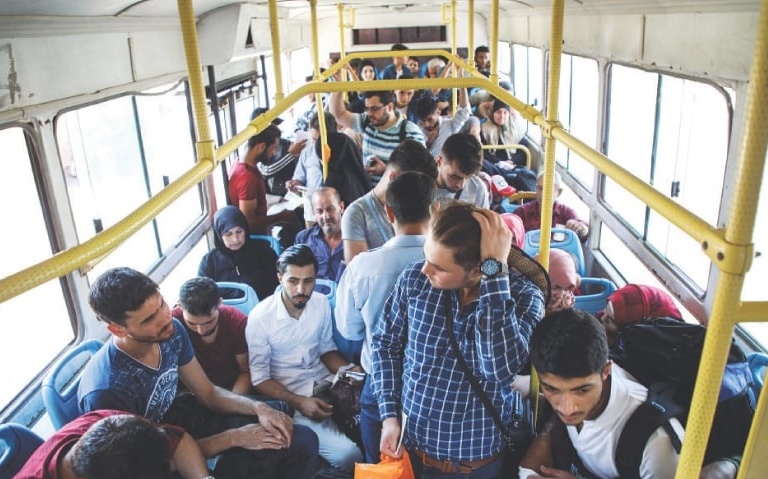 Syrians for Truth and Justice reports on deportations of refugees from Turkey, interviewing 21 people returned to Syria.

The deportees tell stories of their detentions, with Turkish interrogators trying to trick them into signing papers authorizing their return to Syria:

I refused to sign it and asked for a lawyer. The interrogator refused. I informed them of my situation and that I had a kimlik [Temporary Protection Identification Document]. But they refused to listen.

I insisted that I would not sign the document. So they returned me to prison. Two days later, a security officer handcuffed me and coerced me to sign the “voluntary return” document. Then they transferred us to the Jarabulus Border Crossing and handed us to the 9th Division of the opposition Syrian National Army. The division detained, interrogated, beat, and humiliated us. After this, they asked us to pay them money in exchange for our release.

Syria Direct has highlighted the stories of some of the Syrian refugees deported by Turkish authorities.

Muhannad al-Sayyad was seized last month in Istanbul as he tried to complete the process of rejoining his wife and son in Sweden..

Al-Sayyad was pursuing the necessary steps at the Swedish Consulate so he and his other son could move to Europe. He was detained because his Temporary Protection Identification Card (kimlik) was issued in Mersin Province, in southern Turkey 935 km (580 miles) from Istanbul.

He was detained on January 22 as he went to buy groceries, leaving his son with a friend, and was held for held for eight days. He is now in northern Aleppo Province in opposition-held northern Syria, with his son still in Istanbul.

Muhammad Hussam Ramadan, 47, was deported after he came to Istanbul to get an industrial license. Originally from the Jobar section of Damascus, he lived in Urfa in southern Turkey with his wife and five children since 2019.

I had established a new life. My children were in school, and I was on the verge of launching my own business.

Now I’m in one place, and my family is in another. I lost everything overnight.

Munib al-Jalha, 27, was deported to Syria on January 29 after he was imprisoned for seven months for “inciting sedition and spreading it among the people”.

Al-Jalha was arrested last May over a tweet criticizing the use of tear gas by the Turkish police to disperse worshippers at a mosque in Gaziantep in southeast Turkey.

Local activists said the men were rounded up earlier this week and sent to opposition-held areas in northwest Syria.

Deportation of tens of #Syria|n refugees from #Turkey to the areas under rebels controls in Syria for unknown reasons. In the video the people show their Turkish papers which means they are registered and have protection status in TR.
📷 @IdlibPlus pic.twitter.com/KunbQuaV9l

The offense of the men was to travel outside the province in which they are allowed to stay. Each Syrian refugee has an identification, a kimlik, from the relevant province. Turkish police may demand to see the kimlik and may detain any refugee who has violated the terms.

In many provinces, like in Hatay [in southeast Turkey near the Syrian border], it’s impossible to find work for Syrians and locals as well, not even crappy jobs like collecting plastic garbage from fields and roads.

So many Syrians have to go to Istanbul or other places to work, which makes them “illegal”. If caught, they must pay huge fines.

Turkey hosts almost 4 million Syrian refugees, the largest total in the world. However, authorities have carried out previous waves of deportations, including in autumn 2019 amid Turkish occupation of a corridor along the border in Kurdish territory in northeast Syria.

There has been rising hostility against the refugees in some areas, including beatings, and Turkish officials deported Syrians last November for the “offense” of filming themselves eating bananas.

Turkey to Deport Syrians for Eating Bananas on TikTok Video

The current situation is distinctive because the opposition party CHP is in control of Istanbul. Hoping to defeat President Recep Tayyip Erdoğan and the ruling AKP in next year’s elections, the CHP is promising the expulsion of all Syrians if they gain national power.

Rather than returning Syrians to provinces where their kimlik was issued, the CHP has authorized deportation to Syrian towns such as Azaz.

Most if not all of the deported people leave families in Turkey, and in many cases they’re the sole breadwinner. Once deported, they can’t enter Turkey legally, and it’s impossible to support their relatives from within northern Syria.