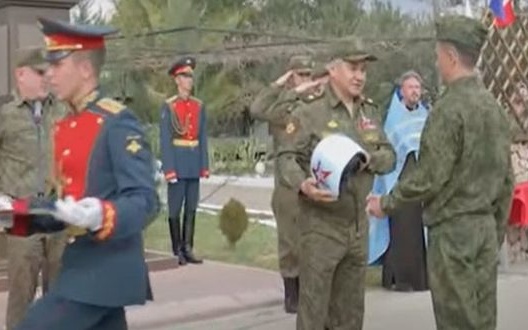 As Russian leader Vladimir Putin threatens an invasion of Ukraine, his Defense Minister Sergey Shoygu is in Syria.

Shoygu met Bashar al-Assad and visited Russian forces at the naval base in Tartous in western Syria.

However, there was a clue in the reference to Russian “naval drills” in the Mediterranean off Tartous.

The Russian deployment not only includes 10,000 troops and 140 warships, which could fire long-range missiles on Ukraine. MiG-31K fighter jets with hypersonic Kinzhal missiles and long-range Tupolev Tu-22M strategic bombers have also been moved to the Russian airbase at Hmeimim in western Syria.

The fighter jets and Kinzhal missiles were stationed at Hmeimim for the first time last year, after the base’s runway was extended. The hypersonic missiles, unveiled by Putin in March 2018, have a range of up to 2,000 km (1,243 miles).

Russia has provided essential support to the Assad regime since the Syrian uprising began in March 2011. In September 2015, Moscow launched a massive intervention with air units and special forces, preventing the fall of Assad and beginning the bombing, siege, and recapture of opposition areas across Syria.