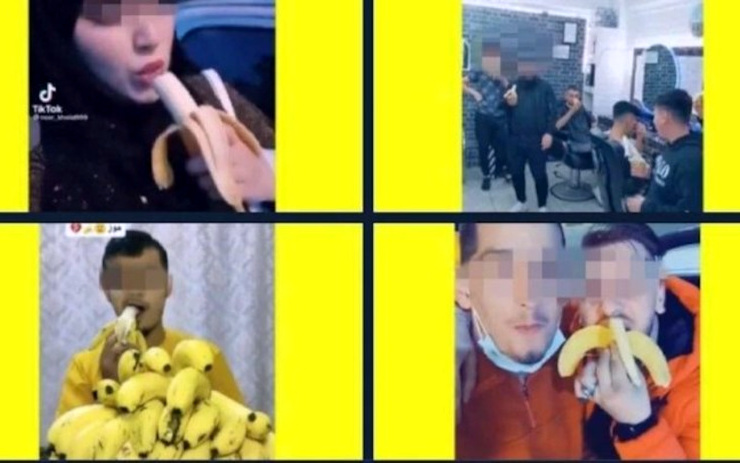 Turkish officials have released Syrian journalist Majed Shamaa, under threat of deportation over a satirical video about the buying and eating of bananas.

Shamaa, who spent nine days in detention, was released from a repatriation centre in southern Turkey near the Syrian border. He returned to Istanbul on Tuesday.

UPDATE, NOV 5: Turkish authorities are considering the deportation of a Syrian journalist over a video he made about the eating of bananas.

Majed Shamaa, who works for Orient News, satirized the Turkish crackdown on Syrian refugees who filmed themselves enjoying the fruit amid Turkey’s economic problems. In the video, he furtively buys bananas and hides them.

Shamaa’s lawyer, Mehmet Ali Hartavi, said Shamaa was seized and taken to a repatriation center near the Syrian border after he was questioned by a prosecutor in Istanbul last weekend. He said a deportation decision is expected on Friday.

Hartavi said Shamaa, who has lived in Turkey since 2014, did not intend to mock any Turks and was addressing the problems of Syrians in a humorous way.

“Believe me, Syrians are afraid when purchasing bananas or fruit. He touched on this bleeding wound,” the attorney said.

He explained that the journalist, who has made satirical videos about Bashar al-Assad, fears execution if he is sent back to an area controlled by the Assad regime.

ORIGINAL ENTRY, OCT 29: Turkey’s officials say they will deport at least 11 Syrians for eating bananas in a TikTok videos.

The chain of events began on October 17 when a group of Turks, in front of cameras, protested the hosting of Syrian refugees amid Turkey’s growing economic problems. They shouted, “Go back to your country and fight your own war.”

A middle-aged man shouted at a female Syrian student, “You’re living more comfortably. I can’t even eat a banana, while you are buying kilograms of bananas.”

The fruit, which costs $1-$2 per kilogram, is seen by many Turks as a luxury.

Syrians in Turkey and in other countries responded with their own images and videos.

More than 3.6 million Syrian refugees — about 15% of Syria’s population when its uprising began in March 2011 — have settled in Turkey. While many have been granted citizenship, Turkish authorities have been accused of arbitrarily deporting others.

In July, the leader of the opposition Republican People’s Party (CHP), Kemal Kilicdaroglu, said he will send Syrian refugees back within two years if the CHP wins power.

Tanju Ozcan, mayor of the northwestern city of Bolu, called for tenfold charges on water bills and solid waste taxes for “foreigners”: “We cut off their aid and stopped giving them business licenses to open shops, but they didn’t leave.”

Omar Kadkoy of the Economic Policy Research Foundation of Turkey said of the threatened expulsions for banana-eating:

I honestly did not see that coming.

The deportation announcement shows a bankruptcy of policy. Do the Syrians have no right to express their views when they are faced with discrimination or use sarcasm against the anti-refugee myths? What does it say for freedom of expression? Worse, what does it say about social cohesion between the Turkish and Syrian communities, except to say it is on very thin ice?

Legal experts and activists said the deportations would violate Article 32 of the 1951 Convention on Refugees, as well as Turkish law, particularly given the threat of the Assad regime to any returned refugees.

“Our Lives Are Like Death”: Assad’s Threat to Returning Refugees — as UN Meets with Regime Officials