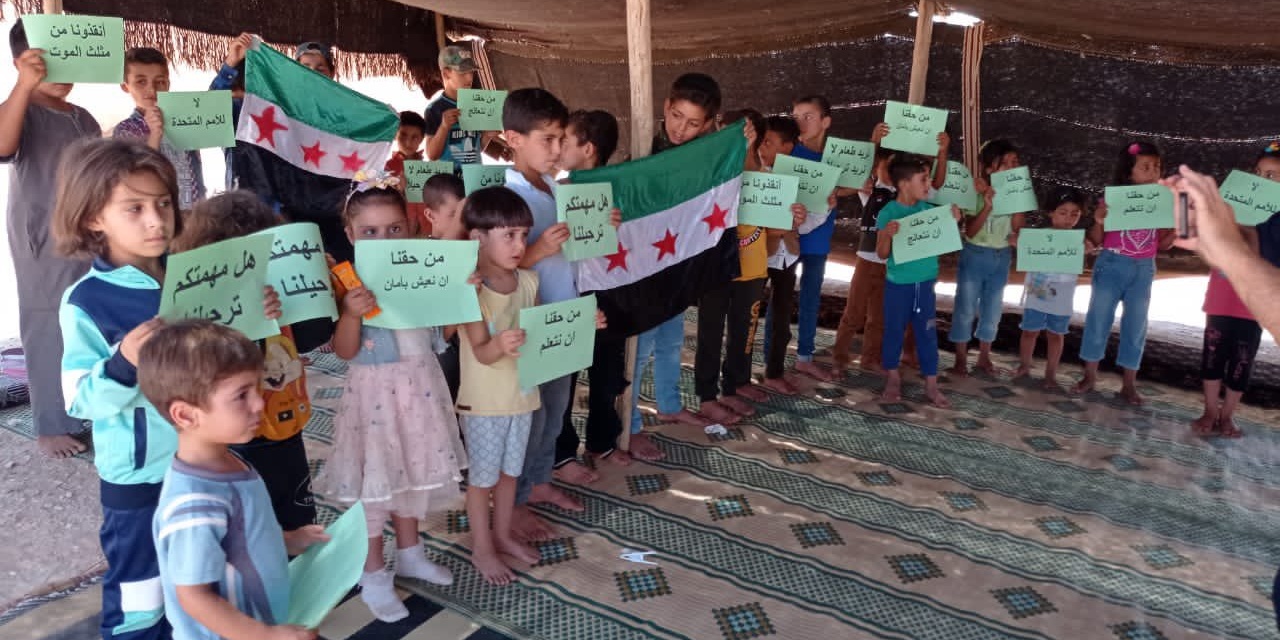 Children at the Rukban camp protest the lack of aid deliveries by the UN, August 1, 2021

In a lengthy France 24 article about conditions in the Rukban camp — amid the failed UN attempt to transfer some families back to Homs in central Syria — an army defector speaks of the risk to those who return and those who remain: “”We are caught between two fires. If we go to government-held Syria, we will perish, and if we stay in the camp, we will die a slow death.”

As residents protest the lack of UN aid, Mohammad Derbas al-Khalidi, head of the camp’s organising committee speaks of the consequences of being “trapped in the desert”: no doctors or surgeons with only a small clinic; children attending classes under canvas or in dilapidated, mud-brick buildings; “any of the teachers selling vegetables or cigarettes in stalls at the market” instead of attending to the students.

But Danielle Jenni Moylan of the UN humanitarian agency OCHA defended the mission for transfer rather than aid. She insisted, “While inside Rukban, a small group of individuals obstructed the convoy and assaulted a driver. As a result, the mission was cancelled and the convoy immediately departed Rukban.”

Moylan said the UN was not in a position to offer security guarantees to any Rukban residents who were transferred.

Rukban residents have turned back five UN trucks which arrived at the camp on Saturday, hoping to transport families to Homs in central Syria.

The residents protested that the trucks were empty, with no aid to alleviate the critical shortages of food, medicine, and essential items in the camp.

A camp official reportedly said that UN personnel did not announce any guarantees to prevent the arrest of the displaced civilians if they left for regime-controlled areas.

In the meantime, the trucks have returned to regime area after being turned away by angry #Rukban residents. – Remains to be seen how #Assad will react to this failed attempt to humiliate people and starve them into surrender. https://t.co/YDm2xqE6mT pic.twitter.com/QFJVFbMzL5

Amnesty International has criticized a UN plan for the transfer of displaced Syrians from the Rukban camp back to central Syria, calling for an immediate halt.

Amnesty said it has seen the plan, under which Assad regime officials could detain returnees indefinitely, citing the threat of Coronavirus.

The organization noted that civilians have been detained, interrogated, tortured, and “disappeared” after movement to the shelters in Homs.

Amnesty quotes Samer, who was “disappeared” for nine months and tortured after he returned to Homs in 2019, “They hate people from Rukban. They think that they all have links with terrorism and should be mistreated.”

ORIGINAL ENTRY, SEPT 8: After another failed UN mission, some of the 13,000 displaced Syrians in the Rukban camp have criticized the organization’s failure to deliver essential aid.

A UN/Syrian Arab Red Crescent (SARC) delegation tried to reach the camp, besieged by the Assad regime and Russia since autumn 2018, last week. However, the mission was only to transfer about 20 families, who had given way to the threat of starvation and lack of medical care, back to Homs Province in central Syria.

Chatter about a repatriation convoy began in late July, amid indications by Jordanian officials that — drawing closer to the Assad position — they want to push Rukban’s 13,000 residents back from the border.

The convoy was reportedly positioned about 130 km (80 miles) from Rukban, at the Assad military’s al-Wahat checkpoint, in the first week of August. Residents sent a message that the delegation was not welcome if it came without aid.

The UN/SARC initially scheduled arrival for August 26 and then, after distribution of leaflets, for last Thursday. However, when they tried to enter a 55-km zone — initially set up by the US military around its camp at Tanf on the Iraq border — they were halted by the anti-Assad rebels of Maghawir al-Thawra. Residents had sent the message, “If you enter the camp, we will burn your cars.”

This will not be the only entry. We will send trucks frequently to pick up those who wish to leave voluntarily and free of charge to Homs.

Five families reportedly departed over the weekend. However, on Sunday, the UN/SARC did not arrive, texting, “Trucks will not enter today due to logistical issues.”

Rukban residents are angered, protesting the failure to relieve their hunger and suffering. A resident summarized:

The Crescent will not enter. It will only send trucks to transport the people.

How can they come to transport the people without sending aid? They are with Assad.

This is forced return and has nothing to do with “voluntary departure”. The UN must not leave people behind who cannot return to regime-controlled regime area for security reasons, knowing they have no access to any kind of aid.

The UN is once again assisting Assad with his illegal starve and surrender war strategy. It is particularly critical that we’re talking about civilians, most of them women and children.

The European Union said in a statement last week that “EU humanitarian aid is supporting people in…Rukban”. However, the humanitarian worker told EA, “I have absolutely not been aware of any such aid.”

Years of Siege And Deprivation

The camp, which once held about 75,000 civilians, was established in autumn 2015 in the barren area of southeast Syria near the Jordanian border. Its residents fled the advance of the Islamic State in central Syria, only to face years of malnutrition and poor health.

The crisis was exacerbated by the closure of the Jordanian border in June 2016, after an Islamic State bombing, and the imposition of the siege by Russia-Assad regime siege, cutting off the main routes into the camp. The regime has blocked any significant provision of UN assistance.

Medical assistance has only been provided for some emergency cases taken to Jordanian hospitals. In March 2020, amid the outbreak of the Coronavirus pandemic, the UN clinic on the Jordanian side of the border — the last possibility of effective medical care for Rukban — was closed. Jordanian Foreign Minister Ayman Safadi tweeted a month later that Rukban “is not Jordan’s responsibility” and that the camp’s needs can be met “from inside Syria”.

The Assad regime has pressured residents to return to Homs. However, the vast majority have cited fears of detention, intimidation, loss of property, and even being forcibly “disappeared” by security services. 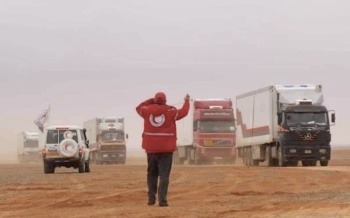