Belarus Deporting Syrians Back to Danger in Assad Territory 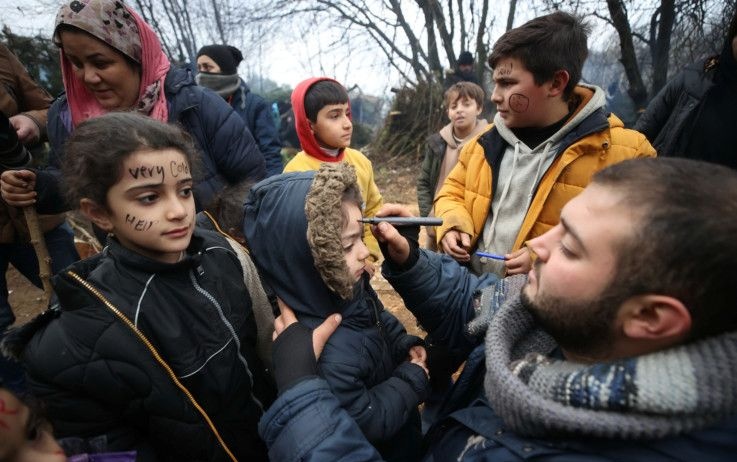 A man writes appeals for help on his children’s faces in a makeshift camp in the Grodno region on the Belarus-Poland border, November 12, 2021.(Reuters)

Having exploited Syria’s refugees to put pressure on Poland, Belarus is deporting them back to danger in Assad regime territory.

Belarus’s authoritarian leader Alexander Lukashenko, under pressure from protests over his rule, enticed the refugees to Minsk in the autumn. Having paying thousands of dollars for documents and the journeys, Syrians and other groups then moved to the Poland border — in some cases, with the assistance of Belasrusian forces — but were blocked from crossing the frontier. At least 17 refugees and migrants died in freezing conditions; thousands remain in the area.

Now Belarusian authorities are rounding up Syrian refugees and returning them to Damascus. Security personnel are raiding hostels in Minsk and giving the displaced an ultimatum: book a flight out of Belarus or be deported to Syria.

A flight on December 8 returned almost 100 Syrians to Damascus. Two of the refugees on the flight, speaking via a friend who made it to Germany, told US National Public Radio of their situation.

They described the hostel raid, with officials giving them three days to leave the country. Their passports were confiscated, to be returned only at Minsk airport. Two days later, the authorities returned with the ultimatum for departure within 24 hours.

One of the men explained, “We told them that many of us can’t go back to Syria because we are wanted by the Syrian regime. They didn’t listen.” Now in Damascus he has only weeks to flee Syria again or face imprisonment or military conscription.

“Go Back to Syria”

Another Syrian refugee, Omar al-Zoubi, is still in Belarus after three failed attempts to cross into the European Union. He has spent in the forest, drinking from puddles and enduring beatings by Belarusian and Polish border guards. The Belarusians ignored his plea that return to Damascus could be a “death sentence”: “They just kept telling me in broken English: ‘Go to Syria.'”

He and other refugees were given a reprieve by a taxi driver who listened to their appeals — “all the guys in the car were crying” — and dropped them at the corner near the airport. The men went to a “safe house” in Minsk, with a cousin of one of them paying for the lodging. One of the group refused to go to the hospital when seriously ill, to avoid the prospect of deportation.

But Zoubi is now back in the forests on the border in the freezing temperature, with almost no money left and going with little food for days. He said this is his only choice.