“Our Lives Are Like Death”: Assad’s Threat to Returning Refugees — as UN Meets with Regime Officials 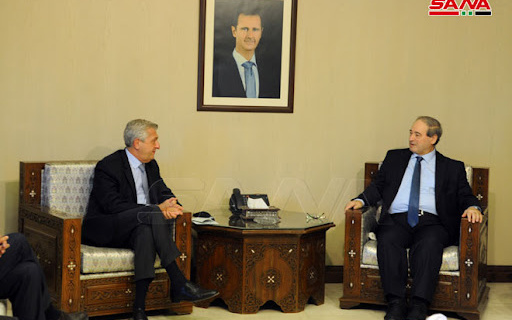 Human Rights Watch has issued a report summarizing the threat to Syria’s returning refugees from the Assad.

The report, “Our Lives Are Live Death“, documents human rights abuses including torture, extra-judicial killings, and kidnappings. Most returnees are also struggling to meet basic needs amid the economic crisis in regime-held areas.

HRW’s findings parallel those of Amnesty International, whose 51-page report last month described the regime’s detention, torture, rape, and forced disappearances of refugees from mid-2017 to 2021.
.

There are an estimated 6.5 million Syrian refugees. Despite pressure and hardship in countries such as Jordan and Lebanon, few have voluntarily returned to Syria, in large part because of the regime threat.

HRW’s report is based on 65 interviews with refugees who did return, or with their family members. Using the practices of “security clearances” and “reconciliation agreements”, Assad officials have abused the returnees and deprived them of their property. The experiences support the observation of a Syria expert, “Nearly everyone who returns will face some form of interrogation. Whether it’s a cup of tea with the security agencies or a full-blown torture session, they want to know why people left.”

Despite the detailed findings, other states and the UN are now accommodating the Assad regime’s pressure for returns. Denmark has removed the “temporary protection” status of refugees who used to live in or near Damascus.

Lebanese authorities have introduced decrees and regulations imposing difficulties on refugees. They have forced Syrians to dismantle concrete shelters, imposed curfews, evicted refugees from some towns and cities, obstructed renewal of residency permits, and summarily carried out deportations. Jordan has stepped summary deportations and denial of access to key areas of employment, and denied the right to claim asylum.

On Sunday, the High Commissioner for Refugees, Filippo Grandi, met Assad regime officials in Damascus. Rather than raising the concerns about regime treatment, he suggested that the international community should work with Damascus on returns.

Grandi tweeted about his visit to “the Umayyad Mosque — a magnificent place of prayer, history and beauty” and followed up:

I have discussed with the Syrian Government ways to strengthen coordination as we address internal displacement, and to cooperate in removing obstacles to the return of refugees.

The UN has been criticized for its pressure on displaced Syrians, notably in the Rukban camp near the Jordanian border, to return to home areas despite the concerns over detentions and disappearances.

The UN refugee agency chief met with Assad’s regime to discuss refugee returns. He said they discussed ways “to cooperate in removing obstacles to the return of refugees.”

Syria is not safe because of the ongoing crimes against humanity committed by the regime he just met. 1/2 pic.twitter.com/yDMG6W5DhU

He added a list of what “Syrian authorities would need to do, at the minimum, to ensure Syria might be safe” but added immediately, “I don’t know anyone who seriously believes the current leadership in Damascus are willing or able to take these actions.”