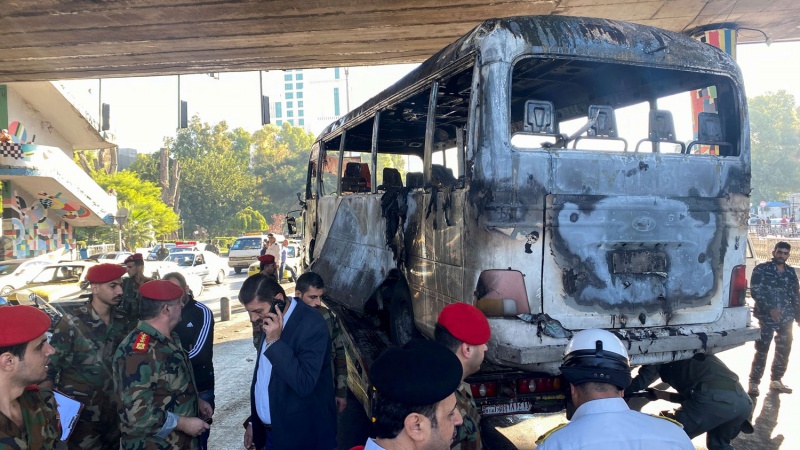 At least 14 people have been killed in the bombing of a military bus in central Damascus, according to Syrian state media.

Assad regime officials said two explosive devices attached to the bus detonated as it passed under the Jisr al-Rais bridge during morning rush hour. They claimed a third, which had fallen from the vehicle, was defus.

Video showed the charred remains of the bus, with smoke billowing from broken windows as firefighters put out flames.

The bombing is the deadliest in the Syrian capital since March 2017, when 31 people were killed in a bombing at the main courts, claimed by the Islamic State. It is the greatest loss by the regime military since an ambush of 4th Division soldiers in Daraa Province in southern Syria in March.

“I was sleeping when I heard a strong explosion. I woke up and saw a bus on fire, which came to a halt after hitting the sidewalk,” said fruit vendor Abu Ahmed. “I later heard the sound of a second explosion, but this one was not as strong as the first one.”

No one has taken responsibility for the bombing, but in August the Islamist faction Huras al-Din claimed the explosion blowing up a Republican Guard bus in Damascus. One person was killed and three wounded.

An hour later, the Assad regime’s latest shelling of opposition-held northwest Syria reportedly killed at least 10 people, including four children and a woman.

At least 20 people were wounded, some of them critically, in the town of Ariha by the attacks on residential areas and a busy market.

“We woke up to the bombardment. The children were terrified and were screaming,” said Bilal Trissi, a father of two. “We didn’t know what to do or where to go and we didn’t see anything because of all the dust around us.”

#Syria: Shocking reports of heavy civilian casualties in Ariha city in southern Idlib, where shelling by Syrian government forces/allies hit a market & roads near schools as students were on their way to school at the start of the day. pic.twitter.com/IrRaPmBX77