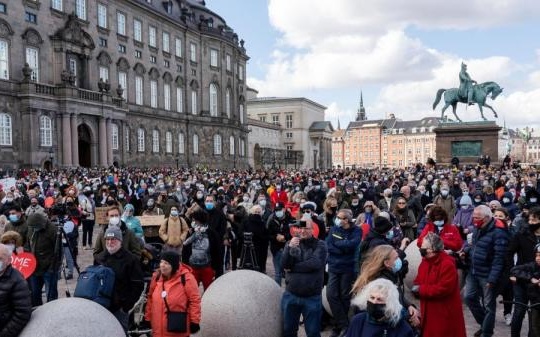 A protest in Copenhagen against the attempt of Denmark’s authorities to return refugees to Syria, April 2021 (David Keyton/AP)

Hundreds of Syrian refugees are in the third week of a sit-in protest over the attempt by Danish authorities to return them to the Assad regime.

The refugees are gathered outside the Danish Parliament. They are challenging the cancellation in April of residency permits of those from the Damascus region.

Despite widespread evidence of intimidation, loss of property, and detention of returning refugees and displaced Syrians, Danish officials have declared the area "safe".

The officials cited a Government report, but 11 of the report’s 12 contributors have withdrawn their assessment. Some have said their views were misrepresented and criticized the cancellation of the permits.

There are about 5.6 million Syrian refugees, about a quarter of the population at the start of the March 2011 uprising. Few have chosen to return to the country, despite the Assad regime’s call on them to do so.

"My Life Has Been Put on Hold"

Aya Abo Daher, 20, came to Denmark from Damascus six years ago. She is in her last year of high school and hopes to apply for university.

I was on a camping trip with my friends and checked my inbox. I had gotten an e-mail where it said that my application for extended residency had been rejected. It was a huge shock, I have not been able to think of anything else since that day.

We wanted to come to Denmark because we thought it was safe for us....It would be dangerous for us to return. I have tried to forget what happened to us when we were in Syria, I saw dead people all over the streets. Now I am forced to remember this again.

How can I think about my future now? My life has been put on hold.

Sameer Barakat, 57, fled from Idlib Province in 2014 with his wife and three children. Living in a small town outside Copenhagen, he is on hunger strike "because the strict rules and injustices happening to immigrants in Denmark cannot continue".

Barakat says, "My whole body is hurting, but it is most painful seeing the children of Syrian refugees running around here. I am afraid of what the future holds for them."

"How Can It Be Safe to Return?"

Omar Jabr is a co-organiser of the sit-in. He also fled to Denmark in 2014.

They are saying that a country whose president has killed hundreds of thousands of its citizens is safe enough to return to. The Danish embassy in Damascus is still closed due to the war, as they think it is not safe enough to keep open. How then can it be safe for us to return?...

The Syrian people were killed by bombs in Syria. Here in Denmark, we are dying from fear that the government will deport us.

Faisal Fahed Ashtiwi, a father of five from Damascus Province, saw his brother and father slain during the conflict. Now he says:

My kids are integrated in Danish society, but I do not feel safe when the asylum policies are getting tighter and tighter.

Where is the Danish media? Where are the politicians? I intend to sit here until someone listens to us.

I would rather take my own life than getting killed by the regime in Syria.