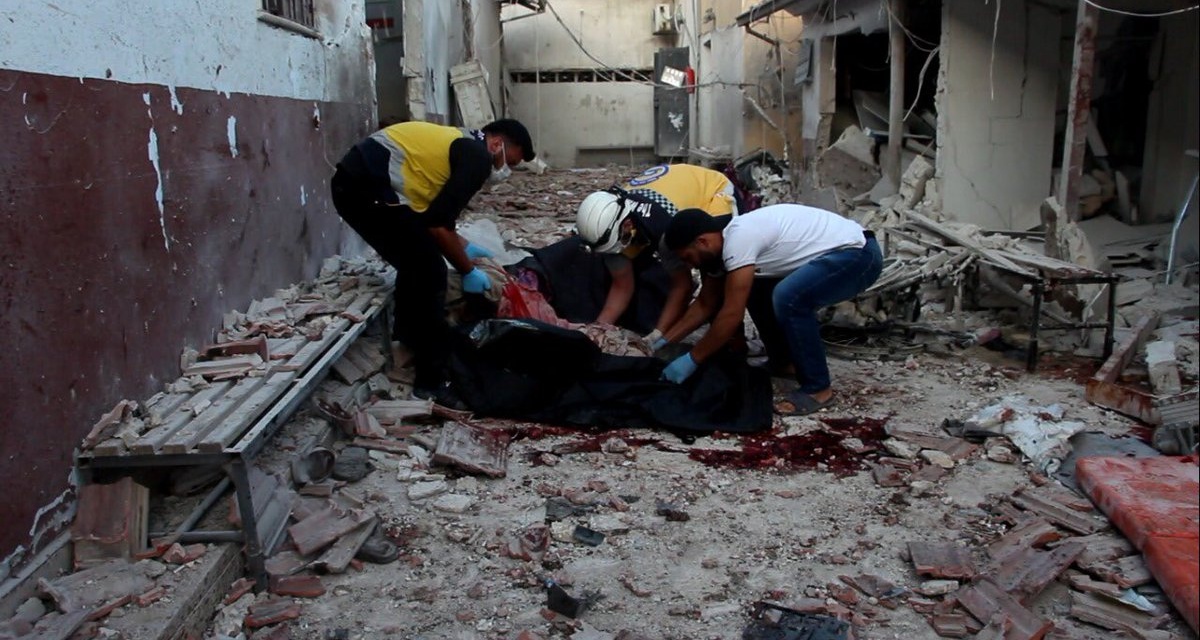 White Helmets rescuers with the body of a victim of shelling of a hospital in Afrin, northwest Syria, June 12, 2021

At least 22 civilians were killed and 45 wounded in shelling, including of a hospital, in Afrin in northwest Syria.

The dead include medical staff, civil defense personnel, and women and children, with the toll expected to rise because of the severity of injuries. The hospital, run by the Syrian American Medical Society, is in a densely-populated area of Afrin.

Local sources blamed the Kurdish-led, US-supported Syrian Democratic Forces for the two attacks on a residential area and on the SAMS facility. They said eight rockets were fired from position controlled by the SDF near Tel Rifaat.

The SDF, created in autumn 2015 to remove the Islamic State from north and east Syria, denied any responsibility. Its commander Mazloum Abdi said on Twitter:

The SDF categorically denies that any of its forces were responsible for/or involved in, the tragic attack in hospital in Afrin. We are deeply saddened by the loss of innocent life.We condemn the attack without reservation. Targeting hospitals is a violation of international law.

Afrin city, north of Aleppo in Aleppo Province, was the center of the Kurdish canton of the same name. The city and most of the canton were overrun by Turkish and anti-Assad forces in March 2018.

Some supporters of the anti-Assad groups claim that the SDF is cooperating covertly with Russia and the Assad regime. Saturday’s attack follows Russia-regime shelling and airstrikes on the Jabal Zawiya region of Idlib Province.

Turkey retaliated with shelling of positions of the Kurdish militia YPG near Tal Rifaat. The militia, overseen by the Syrian Kurdish Democratic Union Party (PYD), is the leading faction in the SDF.

Ankara considers the YPG and PYD as part of the Turkish Kurdish insurgency PKK, which has battled Turkish security forces for almost 40 years.

Dr. Amin Qosho, anesthesiologist, died in the attack on the hospital in Afrin pic.twitter.com/jAPOnzpYD1