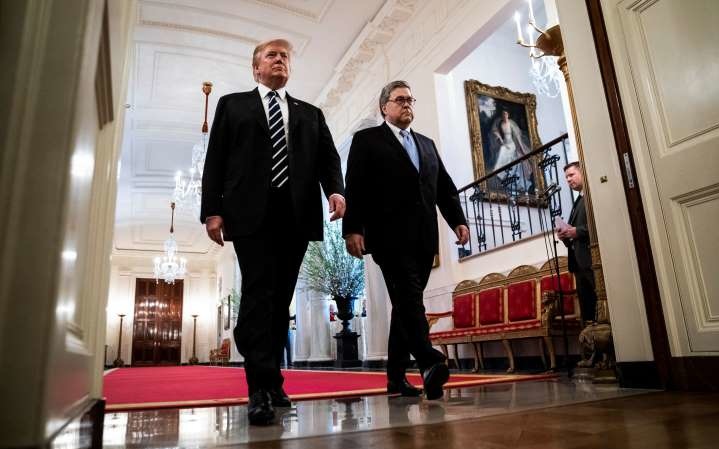 The Trump-era Justice Department seized data from White House Counsel Don McGahn, even as the lawyer was trying to protect Trump over the Trump-Russia scandal.

The Justice Department subpoenaed Apple for information in February 2018 about McGahn’s account, in addition to the subpoenas for data from journalists and two Democrats on the House Intelligence Committee.

Apple told McGahn about the subpoena last month. McGahn’s wife also received a notice, indicating that — as in the case of Reps. Adam Schiff and Eric Swalwell — the Justice Department was seeking data from family members.

The subject of the Justice Department’s subpoena of McGahn was not given. However, it became known in early 2018 that Trump had ordered McGahn in summer 2017 to arrange the firing of Special Counsel Robert Mueller, and later to deny that the episode had occurred.

Two weeks ago, McGahn testified to the House Judiciary Committee about his involvement in the Trump-Russia affair, as set out in the Mueller Report.

My analysis, with the BBC World Service on Saturday, about the scope and significance of the inquiry into the Trump-era Justice Department’s seizure of data from journalists and legislators:

Listen to Discussion from 14:05

The aim of the subpoenas was two-fold. First, to try to bury any possibility that Donald Trump might face obstruction of justice charges, which could be criminal as well as civil.

Second, to support Trump’s stream-of-consciousness on Twitter that Trump-Russia was all a “hoax” and a “witch hunt”.

The Justice Department’s Inspector General, Michael Horowitz, has opened an investigation into the Trump-era seizure of data from Democratic legislators and reporters by Federal prosecutors.

Senate Democrats said on Friday that former Attorneys General Jeff Sessions and William Barr should testify publicly before Congress about the seizures, including the subpoenasto tech companies in 2017 and 2018 for records of at least 12 people linked to the House Intelligence Committee.

Apple, which complied with a subpoena for information from more than 100 e-mail addresses and phone numbers in February 2018, said that it did not realize that records belonged to Rep. Adam Schiff of California, the ranking Democrat on the House Intelligence Committee, and Committee member Rep. Eric Swalwell of California.

Barr, who became Attorney General in January 2019, maintained on Friday that he did not recall being briefed on the seizures — even though he reportedly renewed the investigation of leaks to the media about the Trump-Russia inquiry.

He insisted that Donald Trump, who had demanded the investigation from 2017, never encouraged him to target Democratic lawmakers: “[Trump] was not aware of who we were looking at in any of the cases. I never discussed the leak cases with Trump. He didn’t really ask me any of the specifics.”

With Donald Trump unsettled by the Trump-Russia investigation, the Trump Administration’s Justice Department subpoenaed Apple for data from accounts of at least two Democrats on the House Intelligence Committee, their aides, and their family members.

The records of at least a dozen people were seized in 2017 and early 2018. They included those of Rep. Adam Schiff of California, then the ranking Democrat on the Committee, and Rep. Eric Swalwell of California.

The order was issued by Attorney General Jeff Sessions, who was under pressure from Trump for recusing himself from oversight of the Trump-Russia inquiry. Days after Trump called him “weak” in White House meetings and on Twitter, Sessions — who had been compromised over the inquiry because of his meetings with Russian Ambassdor Sergey Kislyak during Trump’s 2016 Presidential campaign — promised an aggressive pursuit of “leakers”.

The subpoenaed data and other evidence did not tie the Committee to the leaks. But Attorney General William Barr, Trump’s political appointee from January 2019, resurrected the investigations.

Subpoenas of communications data from members of Congress is almost without precedent, except for corruption investigations.

Notwithstanding whether there was sufficient predication for the leak investigation itself, including family members and minor children strikes me as extremely aggressive.

In combination with former President Trump’s unmistakable vendetta against Congressman Schiff, it raises serious questions about whether the manner in which this investigation was conducted was influenced by political considerations rather than purely legal ones.

Schiff cited another example of Trump using the Justice Department as a “cudgel against his political opponents and members of the media”.

It is increasingly apparent that those demands did not fall on deaf ears. The politicization of the department and the attacks on the rule of law are among the most dangerous assaults on our democracy carried out by the former President.

The seizure covered January to April 2017 as the Department tried to shut down information to the media about the Trump-Russia investigation. The reporters are Matt Apuzzo, Adam Goldman, Eric Lichtblau, and Michael S. Schmidt.

The Government secured a court order to seize e-mail logs but not contents — of the e-mails of the Times staff but “no records were obtained”.

The Department did not cite the article which spurred the seizure. However, the four reporters co-rote an April 22, 2017 story about then-FBI Director James Comey’s handling of a politically-charged investigation into Democratic nominee Hillary Clinton during the 2016 Presidential election.

The Department also secretly obtained the phone logs of Washington Post reporters and the phone and e-mail logs of a CNN journalist.

ORIGINAL ENTRY, MAY 8: Donald Trump’s Justice Department secretly obtained the phone records of journalists reporting on the Trump campaign’s cooperation with Russia’s intervention in the 2016 election.

The Department also sought e-mails of Washington Post personnel, according to government correspondence and officials.

A Department spokesman said the decision to seek the records was made in 2020 under Attorney General William Barr, who sought to protect Trump from any political or legal responsibility over the Russia links.

Cameron Barr, Acting Executive Editor of the Post, responded to the revelation:

We are deeply troubled by this use of government power to seek access to the communications of journalists. The Department of Justice should immediately make clear its reasons for this intrusion into the activities of reporters doing their jobs, an activity protected under the First Amendment.

The Justice Department tried to defend the subpoena of journalists’ records as a step of last resort in “a criminal investigation into unauthorized disclosure of classified information”. Spokesman Marc Raimondi said, “The targets of these investigations are not the news media recipients but rather those with access to the national defense information who provided it to the media and thus failed to protect it as lawfully required.”

The Department did not reveal the specific reason for the pursuit of the phone and e-mail records. However, the three Post reporters wrote a story in July 2017 about discussions between Attorney General Jeff Sessions — a senior Trump campaign staffer in 2016 — and Russian Ambassador Sergey Kislyak. A month earlier, the trio wrote about the Obama Administration’s attempts to counter Russian interference in the election.

In early August 2017, Sessions announced an effort to hunt and prosecute government officials leaking information. Trump had complained that the leaks made him look bad, and castigated Sessions as “weak”.

In one case, Obama Administration prosecutors secretly pursued journalists’ phone records and labelled a reporter as a criminal “co-conspirator”. When the tactic was criticized, Attorney General Eric Holder updated Justice Department rules on leak investigations, creating checks on how often and how aggressively records could be sought.