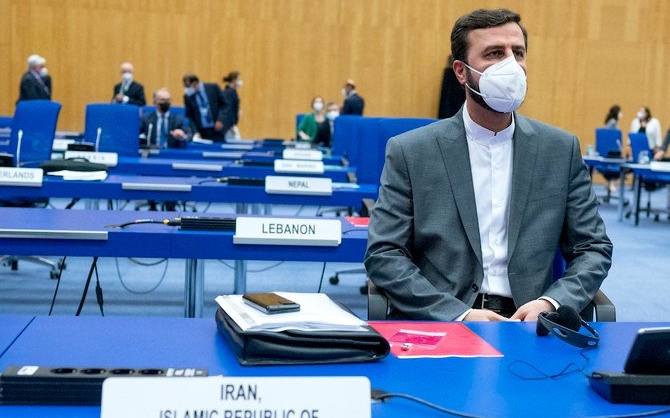 Following earlier statements by US officials, both Iran and Russia have played down the possibility of a renewed nuclear deal this week, before Tehran’s Presidential election on June 18.

The sixth round of discussions opened in Vienna on Saturday. They are seeking US re-entry into the July 2015 agreement between Iran and the 5+1 Powers (US, UK, France, Germany, China, and Russia), lifting of American sanctions, and an Iranian return to compliance such as a rollback of enrichment of 20% and even 60% uranium.

Iran’s lead negotiator, Deputy Foreign Minister Abbas Araqchi, put the onus on arrangements over the removal of sanctions, including comprehensive measures imposed by the Trump Administration in November 2018.

#Iran DFM (after JC plenary): I don’t think we could reach the final conclusion this week…Talks will continue in coming days until we can have a full image of a final agreement…We need to have a timetable…We face a complex situation…Verification of US measures has complexities pic.twitter.com/tcWNZBAUNM

Fully agree that we can’t expect the finalisation of the #ViennaTalks in the days to come. It is almost for sure that we will not be able to clean up the draft final document by the day of the Presidential elections in #Iran (June 18). Nevertheless an agreement is within reach.

A spokesman for the European Union, who is brokering the talks, said, “We are making progress but the negotiations are intense and a number of issues (remain), including on how steps are to be implemented….[The aim is] to find ways to get very close to a final agreement in the coming days”.

ORIGINAL ENTRY, JUNE 10: US officials and their expert consultants indicate that there will be no renewed Iran nuclear deal before Tehran’s Presidential election on June 18.

The sixth round of talks in Vienna, brokered by the European Union, resume this weekend. They are seeking US re-entry into the 2015 deal, lifting of American sanctions, and a return to Iranian compliance including the rollback of enrichment of 20% and even 60% uranium.

A US official said that Iranian demands on sanctions relief remain unrealistic and that a plan for “sequencing”, linking sanctions removal and the Iranian measures, has made little progress.

Deputy Secretary of State Wendy Sherman added in a speech at the German Marshall Fund, “I think there’s been a lot of progress made, but out of my own experience, until the last detail is nailed down, and I mean nailed down, we will not know if we have an agreement.”

“They are still far from bridging the remaining gaps,” Ali Vaez, director of the Iran program at the International Crisis Group, told journalist Laura Rozen on Tuesday. “Doing so requires both sides to demonstrate more flexibility.”

State Department spokesman Ned Price said on Wednesday that the US will not shift its negotiating position to get an agreement before the Iranian election:

[This] is not dictated by any sort of electoral calendar. It’s not dictated by anything other than the fact that the longer Iran remains free from the most stringent verification and monitoring regime ever negotiated, the more potentially dangerous Iran’s nuclear program could become.

We are deeply concerned that Iran has yet to provide the IAEA with the information that the agency needs to resolve questions regarding its potential undeclared nuclear material. These questions relate to Iran’s fundamental obligations under its comprehensive safeguard agreement with the IAEA, which is required by the Nuclear Nonproliferation Treaty.

Iran’s Ambassador to the IAEA, Kazem Gharibabadi, wrote yesterday, “It is yet to be observed whether the US is serious enough and ready to abandon its addiction to use sanctions, respect international law, implement its sanctions lifting commitments in full…and take all necessary difficult decisions that this might entail.”